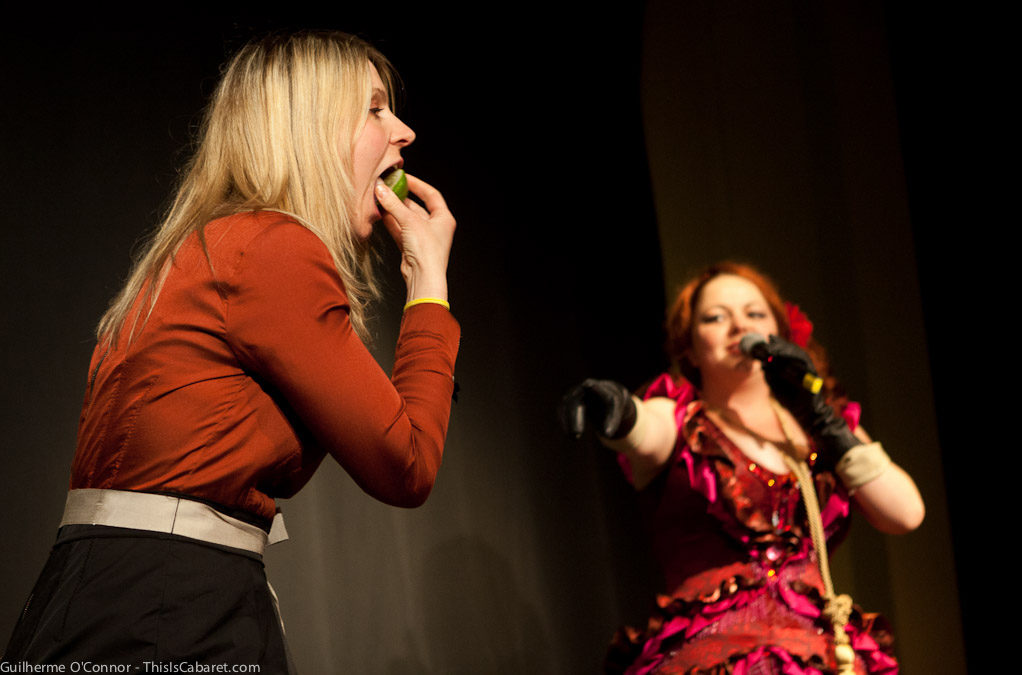 There’s a man kneeling at my feet on the Bluestockings’ stage. Tonight I think I’ll try a new position, to keep things fresh. I wonder if I’ve gone too far as he groans and staggers upright, but then he snuggles up to me and blows sweet nothings in my ear – through a kazoo – so I know we’re still friends. I send him (reluctantly) back to his seat to uproarious applause. Successful audience participation is all about playful humiliation spiced with flirtation…isn’t it? 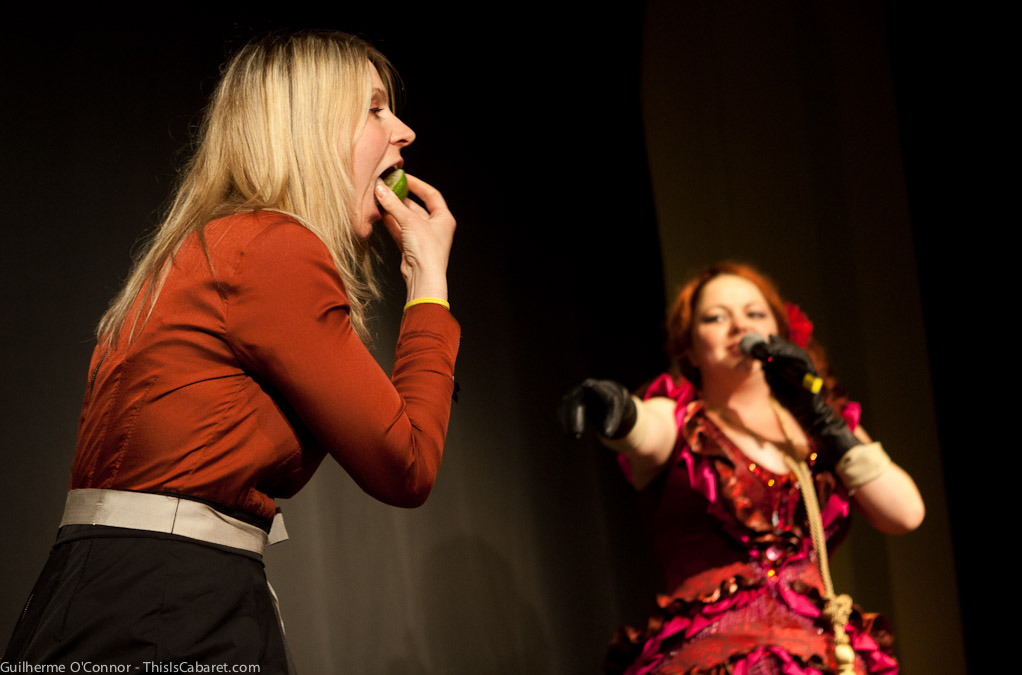 “The audience shouldn’t be allowed onstage at cabaret shows.”

Didn’t she like my act? What about the audience members she gets onstage herself? I stew overnight, and in the morning I get in touch with Ophelia. What exactly are her objections to audience participation in cabaret?

Bitz invites me to lunch. This fills me with trepidation – not because we might argue (that would be fun), but because the last couple of times we went out for “lunch” together left us recovering for several days afterwards.

We lock horns over Thai stir-fry:

“I like audience participation as long as it promotes something positive,” says Bitz, skewering calamari with her chopstick.

That’s me off the hook, I think. Teaching a guy to play a kazoo is positive, right?

“Getting people up onstage for the purpose of humiliating them is not worth anybody’s time,” she continues.

But wait a minute. What about Ophelia’s muff-diving challenge with the cut limes? Surely there’s humiliation there?

So it’s a noble cause?

“Absolutely. To keep the vaginas of the world whistling a merry tune.” 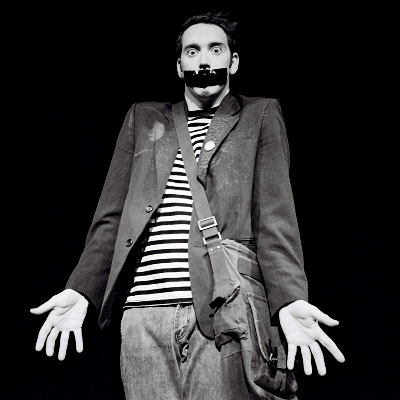 The Boy With Tape on His Face: a master of audience participation

I have a flashback to that kazoo in my ear.

“Occasionally there are magical moments when an audience member pulls it out of the bag,” admits Bitz, “but mostly people stand there looking embarrassed. It’s usually a bit naff.”

I think of the way my cabaret heroes play with the crowd: treading a line between humiliation and collusion. Dusty Limits selflessly mock-fellates the cutest males in the room for the cause of entertainment. When he announces the “Rohypnol lottery”, we’re never sure he’s joking. Holly Penfield sets upon her lucky victims with a bejewelled riding crop. On the subject of riding, Laurie Hagen has been known to get her stooge on hands and knees to mount him. And then there’s the master of audience interaction, The Boy With Tape On His Face, who transforms the confusion of his onstage volunteers into joyful understanding, as they “get” his mimes and prop manipulation games. But sometimes he lets them think everyone’s laughing at them: a soupçon of humiliation for a richer entertainment dish?

“Any time you invite audience onstage, the moment has to be theirs,” Bitz clarifies. “If you put them down, if you make them feel embarrassed or stupid, then you shouldn’t do it.”

But what if the punter’s moment of glory depends on a bit of embarrassment first? Many’s the time I’ve turned a volunteer away because they could already play the kazoo. If my stooge doesn’t start off unable to get a sound out of the thing, there’s no triumphant breakthrough when they realise how it works.

Ophelia’s stance has made me examine my own passion for turning spectators into co-participants. My solo shows, The Blue Lady Sings and The Blue Lady Sings Back, depend on my singing skills as much as on my cajoling the audience into playing with me. I could have left them in their chairs and given myself an easier time, but why didn’t I?

Before I found cabaret, I worked in TV for many years, and one of the reasons I fell out of love with that world, and in love with this one, was the audience. When you make television, you never meet them. In cabaret, they’re up close. The risk involved in going one step further and interacting with them is…addictive. 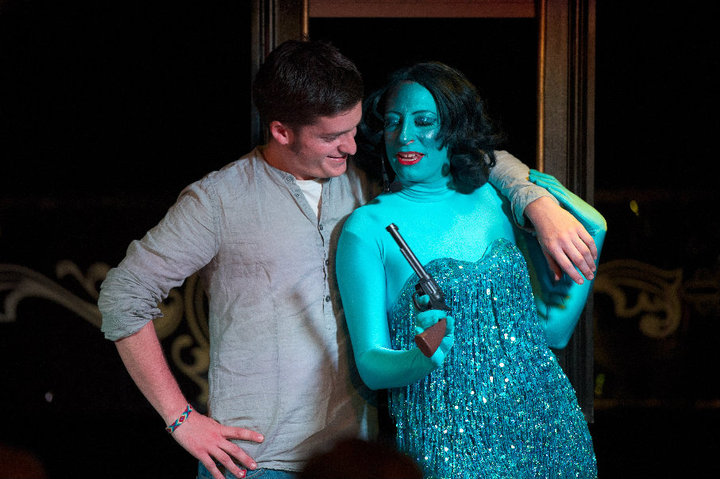 I put it to Bitz that the danger of an audience member not “behaving” is part of the fun. But for Ophelia, performance remains fundamentally us-and-them: “I’d much rather have a show where the response is ‘Wow, we were just taken out of ourselves for a couple of hours and it was fucking excellent.’ You give the audience permission to relax and have a good time. The responsibility for their enjoyment lies with the performers, and that kind of contract is important.”

Lunch was over and we still disagreed completely. What do you think? Love the interaction or just want to see the acts shine?

Tricity Vogue and Ophelia Bitz return to the Bluestocking Cabaret on Friday, June 1st for their Royal Jubilee special, Breast of British, at the Seven Dials Club in Covent Garden. See www.thebluestockingsociety.co.uk for tickets, line-up and other details.

Tricity Vogue and Ophelia Bitz stalked artists and spectators alike to find out their takes on audience participation. See what some of them had to say.

Dusty Limits, singer and compère
It’s an intrinsic part of cabaret. It’s a question of keeping it short, sweet and funny. If it takes over, then the audience have effectively paid to watch other members of the audience. And audiences are not professionals.

Barbsie S., spectator
Some audience members like the interaction. The best performers know when they can include them or move on. The audience has a pretty good idea of what’s in store from the performers on the bill, unless of course they are “virgins”.

Big Chief Random Chaos, fire juggler
I don’t necessarily go out to embarrass an audience member, and will quickly move on if they are not interested. I consider myself to be more of a cheerleader than host. I’m there to walk among them and be part of them: play games with them rather than play jokes on them.

Rebekah M., spectator
As an audience member, I have come to be entertained, not entertain.

Lili La Scala, singer and burlesque dancer
As long as there is no humiliation involved, it is great. The audience member should feel like a hero, not the class idiot. I hate performers who treat their audiences disrespectfully, especially when they need their help.

Sarah H., spectator
If it encourages a feeling of unity or involvement, fine. But as in comedy, if it’s picking on individual audience members, it communicates a lack of material, and makes the punters uncomfortable and unhappy.

Mat Ricardo, gentleman juggler
Always send them back a star. Never use them for a cheap laugh by making them do something. Good use of volunteers equals making a collaborative moment between them and the performer.