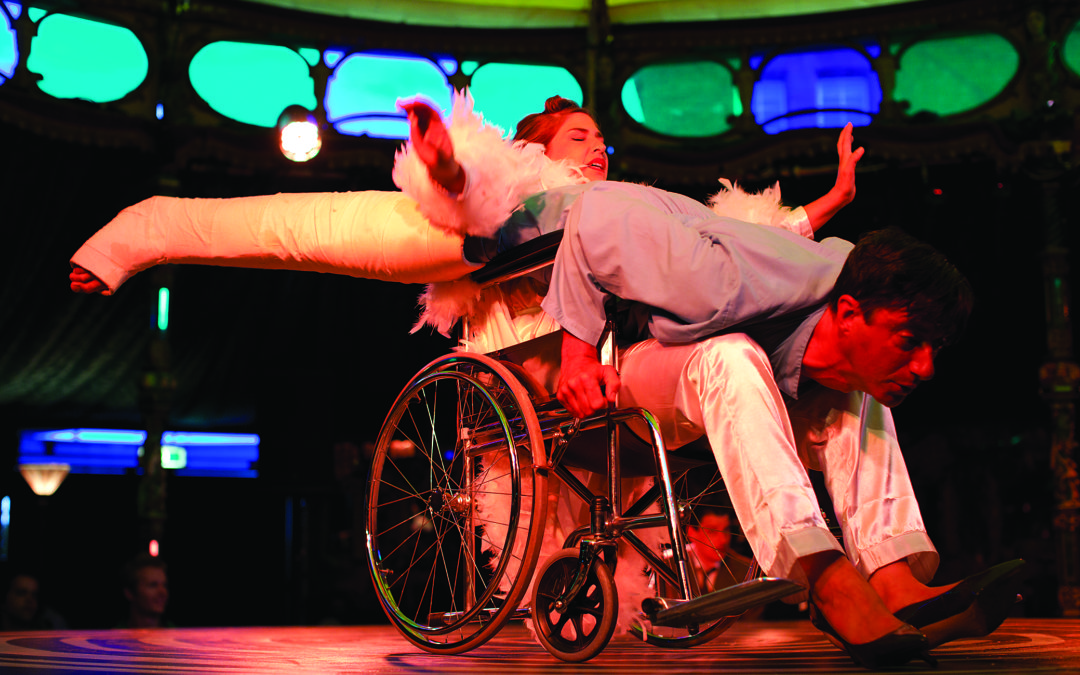 Shorter, sharper but still faithful to the film director’s vision: Mary Bijou’s Hitch is, like its source material, a circus show with more than a few twists. 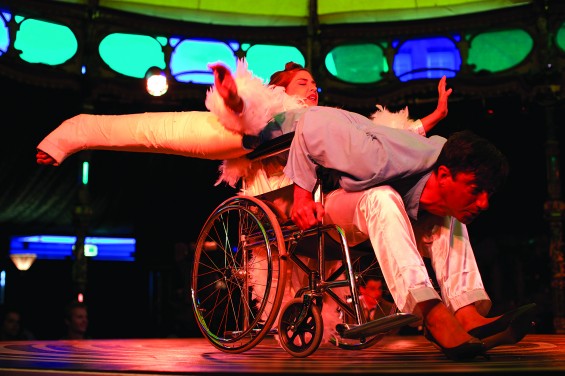 Since this Alfred Hitchcock-inspired circus cabaret by Mary Bijou Cabaret And Social Club debuted last year at the Blysh Festival, commissioned by the Wales Millennium Centre, Hitch has been honed and tweezed from a 2-hour 2-act show into a well-paced hour-long festival version and, from reading last year’s review, it seems this may have been an excellent move.  The theatrical variety performance now builds steadily in its morbid humour and sinister glee, holding the packed Spiegeltent audience in – or on the edge of – their seats until the final grisly twist, thrilling us with some excellent circus acts and novel presentation along the way.

I did wonder before coming whether I should bone up on Hitchcock’s works, having only ever seen Psycho before; I needn’t have worried.  The nifty programme card feeds us all we need to know in typically irreverent cabaret fashion and, though I found myself sitting next to a die-hard Hitchcock fan, I had no desire to delve for deeper insights.  The acts may have been inspired by the famed director’s movies, but they tell their own twisted stories; and, if I miss out on a few knowing chuckles at the details, there are still plenty of laughs, gasps and winces to be had by all.

The compere for the evening is Mary Bijou co-founder George Orange, full of extravagant neurotic energy and humble clowning (think Sean Gunn’s wonderful Kirk from The Gilmore Girls).  If he seems at a loss for spontaneous filler once or twice, it is only for a moment, and his crazy physical manipulations more than make up for it as he is variously poisoned, crippled, robbed and man-handled over the course of the evening.  Orange also presents a Vertigo-inspired slack-line routine that is much more impressive than the audience seem to appreciate, particularly when he faces out and slowly bends to pick up a handkerchief from between his feet with his teeth.

Original compositions from live musicians Tom Elstob and Bethan Cecil, as well as re-mixes from Branwen Munn, bring the edge of cult thriller tension to the skits and sequences centre stage, while audio tracks from classic interviews offer unusual and – dare I say it – thought-provoking opportunities for cross-dressed lip-syncing.

The skills and confidence of the performers seems to grow as the evening progresses.  Laura Moy‘s treatment of her avian persecutors during the opening chinese pole number is rather unceremonious, and it’s possible that she’s tired after rushing to the Spiegeltent from performing in Flown earlier this same evening; the amusing acrobalance between Orange, co-founder Anna Sandreuter, and a rogue wheelchair, teeters between character-awkward and physically-awkward at times; reverse strip-tease from Joe Wild “becoming Madeleine” is intriguing and quite moving; by the time the cavorting “Hitchcock Blondes” show off their surprisingly good legs I have relaxed into the show, confident of Mary Bijou’s ability to hold my attention.

I especially enjoy the unusual poetic spectacle of wide-eyed Cecil becoming a human music-box as Wild enacts another murder-most-horrid, moving from abstract to elegant, through sinister, ridiculous and dramatic, playing all the parts himself.

The transitions between numbers are theatrically smooth, as are the general gazes we receive through most of the show. The crowd are sometimes slow to respond to participation requests, but this is handled competently, especially by Sandreuter in her Stage Fright inspired hula-hoop routine.  Coupling a German practicality with a delicious taste for murder, her skilful presentation manages to work technical failings into the wonderfully dark comedy of this stand-out act.

As the familiar strains of the theme to Hitchcock’s TV show build, and I watch the silhouetted tree branches sway through the ominous glowing windows above, I watch the finalé being set.  Sometimes the rigging deserves its own build up and this, as the iconic shower curtain reveals itself, is one of those times.  The fabulous piece of kit allows Sandreuter and Wild to exercise aerial and acrobatic techniques in homage to the Psycho original, while the pulsing music keeps the energy high until the final twist.

Not only a thoroughly entertaining evening, but one whose images have stuck with me.  Now I am inspired to go and watch some Hitchcock.