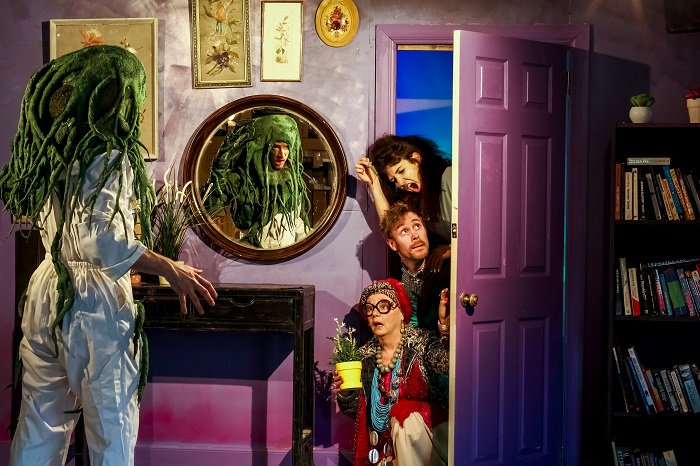 Don’t look now but yet another new immersive theatre experience has landed in London. Is it any good?

Based on the popular 1990s children’s horror novels written by American author RL Stine, this take on the Goosebumps books can be found in the Vaults and comes in two distinct flavours: Goosebumps Kids for those aged 5 -11 and Goosebumps Alive for older folks (at least physically, if not mentally). Those wanting to know what the junior production entails will need to quiz the shorter audience members leaving the show; this review is all about the joys of feeling Alive.

Those unfamiliar with the source material or who raise an unimpressed eyebrow skywards at the very mention of kid-lit inspired ventures should take into account three key factors which make all the difference here: the director, the music and the location.

Helming this underground adventure is American writer and director Tom Salomon. Who he? Those who had a wild time on Accomplice will know exactly who he is. That particular escapade saw ticketholders go on a secret mission from the Tate to the Menier Chocolate Factory via the South Bank interrogating ice cream sellers and streetfolk, popping into hidden depths of riverside pubs and solving puzzles from clues hidden in the peoplescape around them.

Goosebumps Alive is not as expansive an experience as Accomplice; rather than wandering around at will, punters are directed on a promenade experience through the Vaults’ maze-like environment. Having said that, Salomon engineers a sense of perpetual wonder by putting behind every corner a range of very different sets: one minute you could be sat in a pub or a cornfield, the next you’re whisked away to a basement or a teenage party.

Any immersive experience lives and dies on the ambience of the location and the Vaults has that in buckets. The dank walls, the damp smell, the subtle rumble of overhead trains leaving or arriving at Waterloo – these all imbue a level of general discombobulation and creepiness between the different episodes and the spectacular finale makes grand use of the cavernous locale.

There are a few nods to audience participation but the immersive factor is relatively weak compared to Accomplice. Despite the literary connection, this is not on the interactive scale of Punchdrunk’s epic Masque Of The Red Death and audiences can expect to spend much of the time sat down watching and listening rather than exploring. Also, the intensity of some of the scenes is disrupted by noise bleed from other scenes being played simultaneously; those who want to see all of Goosebumps Alive are advised that more than one visit will be necessary.

Music is rarely a selling point for immersive productions but, then again, they also rarely call upon artists like the devilishly deviant Tiger Lillies. The renowned dark cabaret trio have been going for over a quarter of a century, pumping out 35 albums along the way and filling venues around the capital as diverse as Soho Theatre, London Wonderground and the Southbank Centre. The band’s singer Martyn Jacques described his inspiration for the music they wrote for Goosebumps: “I’ve imagined what it would be like for The Tiger Lillies to meet The Munsters or The Addams Family.” It’s this playful attitude which shines through not just in the music but the treatment of some of the lighter stories.

So the big question: how scary is Goosebumps Alive? Initially, not very. You don’t have to have been up all night watching French torture flick Martyrs to be inured to a few of the stories but the overall fear factor here is streets ahead of previous London hit Ghost Stories. The principal mistake made by that show was to play out its yarns in large theatres; the atmosphere never truly built up, the only shocks were the ticket price and the only puzzle why so many critics liked it. Salomon has correctly identified that intimate spaces and fantastic sights are the key to a real sense of horror and he and designer Samuel Wyer (Alice’s Adventures Underground) have done well to bring to life the visual spirit of the source material: for some, the claustrophobic nature of a tent or corridor is enough for a case of the chills but Goosebumps Alive adds creepy characters, some neat costuming and enough variety to keep the audience forever on the hop over the ninety minute runtime.

Like any good horror story, the premise here takes a while to set in but, soon after, fear begins to take a grip, curiosity whets the appetite and – almost before you know it – you’re trapped in a lift with a dozen strangers in pitch black darkness waiting for something frightening to happen. It may be more than six months until Halloween but that’s no excuse not to get stuck into this wonderfully scary blast of chills and thrills now.

Goosebumps Alive continues in The Vaults until 5 June 2016. Ticket availability and information can be found on the official website.