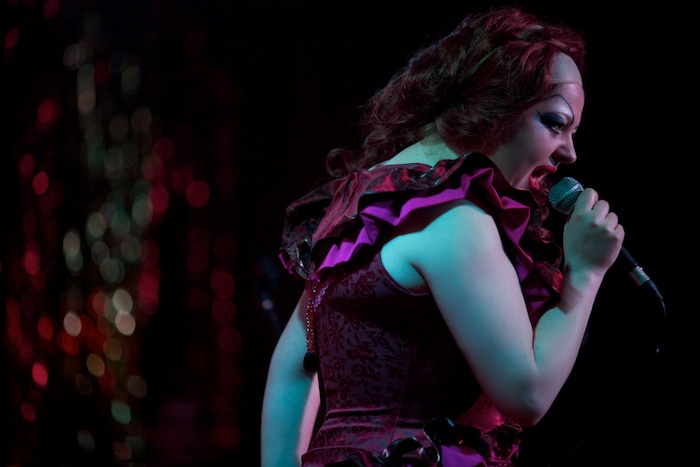 Film, gig or cabaret? Ticket holders to Emerald Fontaine’s Dirty Shame can do all three under one roof on a night out. Inspired by the celluloid filth of director John Waters, this variety hybrid is a gaudy joyride of American kitsch and tongue-in-cheek rock and roll rebellion.

Each show starts with a DVD projection of an entire John Waters film. Last November, the revue’s debut featured trash classic Pink Flamingos. For the second date in May, the chosen gem is rock musical Cry-Baby, which colours the interiors of the Bethnal Green Working Men’s Club. Huge lettering above the bar christens it “Turkey Point”, the movie’s hillbilly hangout. Across the room, a bad girl makeover stand covers patrons in just the right make-up, nail varnish and fake tattoos to achieve that elusive trailer park look (at no extra cost). The evening has even got its own cocktail, a sweet pink concoction of vodka and something else I’d rather not know.

A John Waters event wouldn’t be complete without a white trash couple, and Dirty Shame does not disappoint. Lip-synching to The Bloodhound Gang’s A Lap Dance Is So Much Better When the Stripper is Crying, Lil and DeVille pervert a perfectly good striptease into a graphic torture tale of revenge. Things get even more graphic with sideshow freak Heavy Metal Pete, whose antics include swallowing a coat hanger and contorting through an unstrung tennis racket. Presented as a tribute to Iggy Pop’s character in the film, the gimmick is tenuous, but the act’s gross-out factor wrings cheers, gasps and moans in equal measure from the audience. 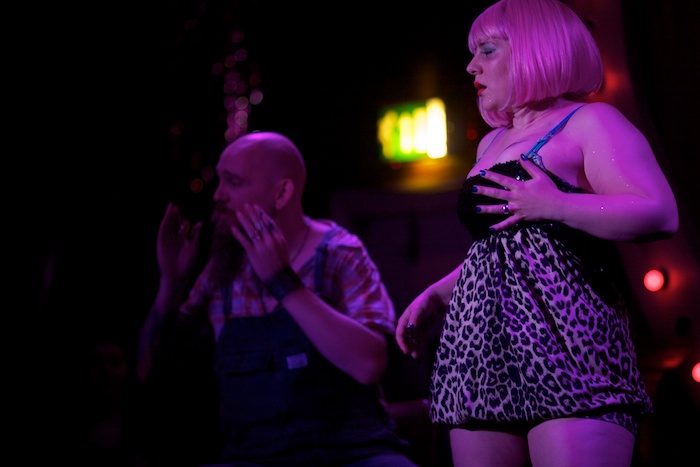 No pain, no gain: Lil and DeVille do the roughhouse for your pleasure

Dirty Shame’s sophomore engagement gained the added kick of a live band headliner, clearing the tables for a knees-up to the lively grooves of rockabilly trio Sixteen and the Sidewinders. The new format keeps the event fresh and engaging: after soaking up dirty vibes while sitting through a film and live variety, the crowd’s ready to stand up and hit the floor. As evidenced by other shows mixing live music and variety, like Blues and Burlesque and Gypsy Hotel, it’s a sure recipe for great cabaret.

Dusty Limits wore a pencilled pencil moustache and dubious accent to compère the debut last year. In May, it was co-producer Benjamin Louche’s turn to attempt a John Waters impersonation. It’s anyone’s guess who’s coming next, or when – future dates of Dirty Shame are yet to be announced. Check the website for upcoming details. A shameless cabaret celebration of guilty pleasures like this is worth waiting for.