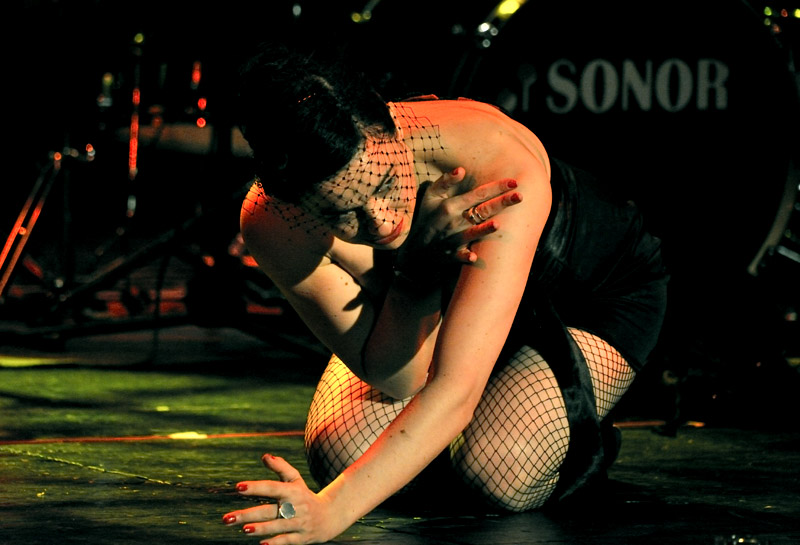 Ploughing through her usual repertoire of Tom Waits and Nick Cave compositions, Feel is the first of five different Camille O’Sullivan shows in the Priceless London Wonderground festival. It’s running for two days only, but fans don’t need to worry: eight more dates in May, June, August and September offer plenty of opportunity to bask in her annoying shrieks and cardboard existential turmoil.

The singer enjoys a reputation as a cabaret maven, probably because of her stints with circus show La Clique at the time it became a phenomenon. Her shows often have varying degrees of audience participation, but Feel is essentially a rock concert, with no more interaction than a sing-along and brief banter delivered in the aisles. If she belongs in the genre at all, Camille O’Sullivan is the Jack Black of cabaret: overdone in every sense, and unconvincing even as a parody of what she’s going for.

What that is, though, rather than cabaret, is power ballads belted with baroque sentimentality. O’Sullivan keeps the emotional tone of her performance cranked up to eleven throughout the show, drowning every song in exasperating teenage angst. Her voice has no range other than two extremes: a cracked Janis Joplin pastiche and a limp, lifeless whisper. That run-of-the-mill tortured artist shtick grows repetitive by the third tune, and doesn’t change for the rest of the concert’s 90 minutes.

The singer’s four-piece backing band is admirable, alternating keyboards and drums with more unusual fare like a cornet, but the arrangements level the entire setlist with unwavering intensity bordering on arena rock levels. If you ever felt a moving, intimate track like Cave’s The Ship Song could use some extra punch, look no further. It sounds as good as you’d expect with a virtuoso electric guitar solo.

The repertoire has a few welcome surprises. Discarding the band’s maelstrom to feature O’Sullivan on vocals and foot-stomping, Jacques Brel’s Port of Amsterdam becomes a rich storytelling exercise, while Kirsty MacColl’s In These Shoes? progresses with a dynamic playfulness that is quite refreshing in such a gloomy programme. That is sadly the exception: more representative of the show is the singer’s melodramatic take on Hurt, a track fast on its way to becoming the new Hallelujah with each new schmaltzy cover inspired by Johnny Cash’s recording.

A couple of costume changes and toy props complement the singer’s attempt at showmanship, all erratic and inconsequential. There’s little to recommend Feel beyond its unusual selection of songs. It could have been quite an achievement if Camille O’Sullivan knew what to do with them.

Photo courtesy of the performer