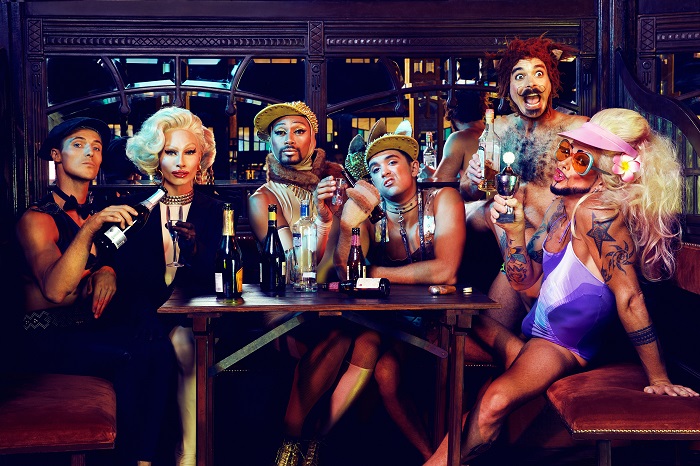 Briefs is no stranger to the London Wonderground’s Spiegeltent and the ensemble of boylesque, circus and drag performers are back in the capital showing Marika Rauscher exactly why.

As opening numbers go, Briefs‘ is impressive. A beautifully choreographed, whole company feather fan act with nods to old school burlesque seductively warms us up and lets us imbibe the spirit of the show. It wastes no time in revealing the muscular athletic bodies of the troupe, stripping to their crisp white titular briefs lit up under the fluorescent lighting, leaving the males in the audience wondering why they abandoned and dismissed the Y-Fronts all those years ago.

Briefs is hosted by the bearded, dry witted, high heeled gender-bending Shivanna (Fez Fa’anana). She indulges in as many costume changes and glorious wig donning as there are acts, and strings the show together with a good dose of audience interaction. Her own magic display is more entertaining for the tongue in cheek piss taking of the craft over the magic act itself.

Louis Biggs is an undeniable crowd pleaser, with his naughty school boy act, demonstrating his wizardry with a Rubik’s cube and some eye-popping and novel ways to manipulate a yoyo from certain delicate parts of the anatomy.

The mischievous and excitable Evil Hate Monkey takes to the stage (and audience) in a yellow tutu, ballet pointes. He has an obvious animalistic obsession with bananas which might not be to everyone’s tastes and brings the only real “shock” value to a show which is certainly not for the faint hearted.

The skills of Thomas Worrell had an almost hypnotic effect in having the audience transfixed with his aerial hoop, contortion and hand-balancing, in contrast to Mark ‘Captain Kidd’ Winmill’s highly energised and show-stopping trapeze birdbath finale which made the show quite literally go out with a splash.

There is certainly a high level of craftsmanship behind the rude, crude, and hilariously wonderful serving of camp, combined with the dazzling costumes made by the diva drag of the show Della Dellaforce herself, were complemented by a refreshing mix of music and clever use of lighting.

The show is also broken up by an audience raffle being drawn for a surprise prize; it comes with a routine highlighting the troupes undercurrent and obvious gripe with the Australian government, all wrapped up with (you guessed it) some wonderful disco dancing. Those looking for the Briefs boys appearing alongside other acts can also check out Club Briefs (15 and 29 August, 12 and 26 September) which sees new acts from the Briefs crew and the opportunity to do some dancing of your own.