Lady Rizo: “Alec Baldwin Is Exactly How You Would Imagine Him To Be” 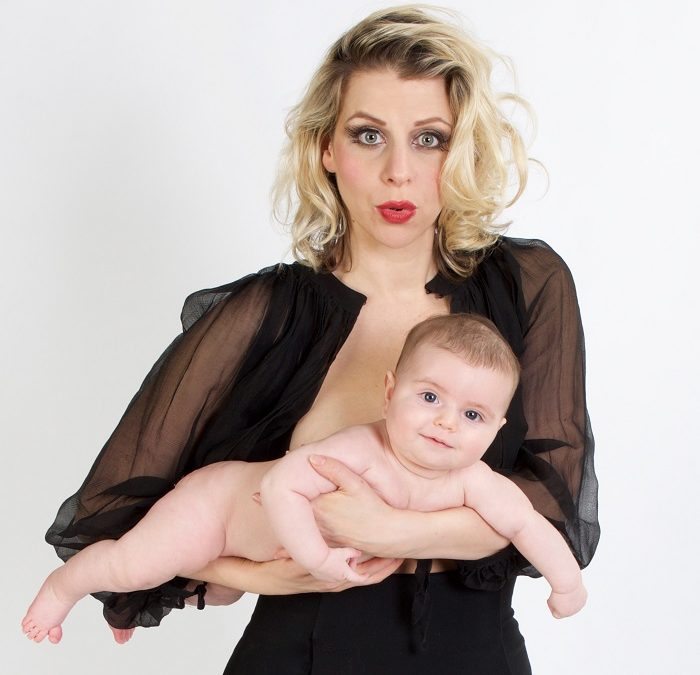 The award-winning NY chanteuse Lady Rizo returns in March to the Soho Theatre stage for the UK debut of her new show Multiplied. This time around, she’s joined not just by a backing band but by her months-old son, Tennyson. Before she touched down in London, we spoke to her in Sydney about her baby, her appearance in a Superbowl ad with Alec Bladwin and Missy Elliot and (of course) the show itself.

Congratulations on the new arrival! Having a chanteuse for a mother must kick ass in the lullaby department. Does Tennyson have a favourite song yet?

Thank you! My first gig after the birth was to be a last minute replacement for amazing NY belter and comedienne Bridget Everett in a Murray Hill Christmas, the legendary downtown showbiz patriarch’s yearly revue. I was honestly a little concerned I had forgotten how to perform. In a day I had to learn Clarence Carter’s Back Door Santa and Tennyson, who had previously been quite indifferent to my singing, started smiling and giggling when I attempted to sing like male soul Southern singers from the 1960s.  I was so relieved I hadn’t lost it and could delight a soul 6 weeks old. He responds quite well to the Blues and also when I attempt to sing in soprano opera.  He loves the Queen of the Night aria from the opera The Magic Flute.

Tell us more about the show. How much of it was inspired by Tennyson?

My shows lately have been an attempt to view my own life through the filmy gaze of a high quality sheer fabric.  So, yes, it’s very inspired by my larger thoughts about motherhood, the act of bringing life into the world and the human tribe in general.

You’ve come a long way from working on a cruise line in Alaska. Now that you are juggling a (very) small child and a new show, do you ever yearn for the simple(r) life?

I’m currently in Sydney day-dreaming about a country home here.  I never thought I would want a simpler life but it’s quite a lot to raise a baby.  I love New York and I love what I do, I also love touring and truly I was made to be on stage.  So the baby has to learn that life too.  Thank god I have a partner that understands and is patient with life on the road.

Are there any plans to take the new show elsewhere around the UK, for example the Edinburgh Fringe?

I’m bringing it to the west coast of America, and there are some queries in New Zealand and Australia but I don’t think I’m ready to do the Fringe again quite yet.  It’s a whole other energetic output.

What was it like taking part in Amazon’s Superbowl ad?

It was quite enjoyable and I was so honored they wanted me!  Missy Elliot is not unlike a pixie angel and Alec Baldwin is exactly how you would imagine him to be – very funny in a slightly acidic way.

Finally, you and your good friend Amanda Palmer have both recently pushed out new life into the world. Are you sharing mothering tips?

Funny you should ask, she just emailed me and a couple other people who gave birth in the same month (including British performance artist gem Bryony Kimmings) a new song that she wrote about mothering.   It’s nice to know that we are going through the same thing.

We wrote to each other a bit through the pregnancy as well.  She’s got a couple of months headstart which is meaningful in this time of rapid development so I am grateful for any insights.  Nicholas (the baby daddy) and I spent a couple weeks relaxing before the birth and after up at Neil and Amanda’s bucolic Woodstock estate but unfortunately they were not there.

We are looking forward to the day our boys can run around in the woods together and complain about what it’s like to have gypsy cabaret star mothers.

Multiplied can be seen at Soho Theatre from 7-26 March (no show on 10 March). Tickets are £15-25. More information can be found on Soho Theatre’s website.