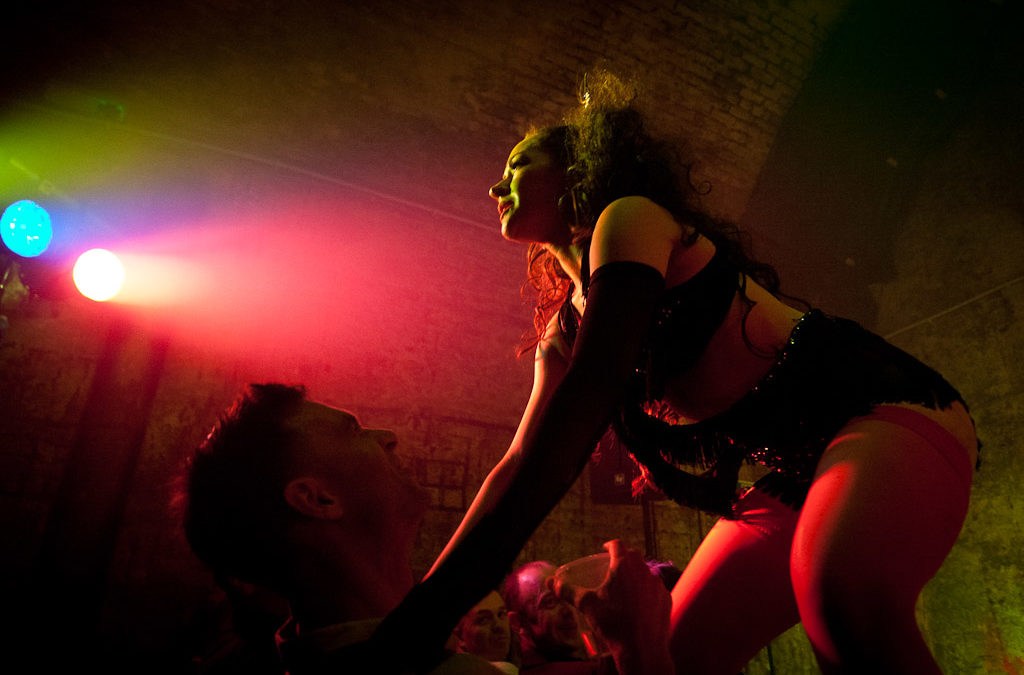 Kitty Bang Bang has graced stages far and wide with her sizzling burlesque performances, from The Hurly Burly Show and other seminal London revues to established international events like the Burlesque Hall of Fame Weekend in Las Vegas. The dancer, fire breather, curator and choreographer is about to add “producer” to her enviable résumé with Boom and Bang Circus, co-created with husband Bioux Lee Hayes (co-producer of Boom Boom Club). Franco Milazzo talks to the feisty feline about her newest project. 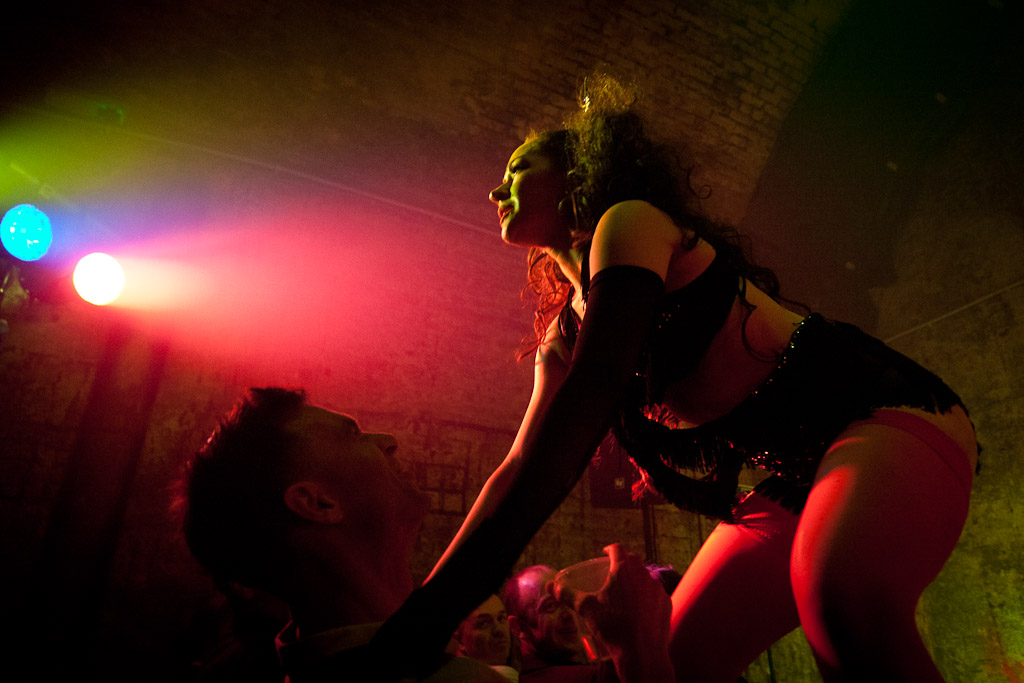 It’s surprising that a variety veteran like you hasn’t put out a show of your own all these years. Have you never considered it before?

It didn’t cross my mind until I was working on Polly Rae’s Between The Sheets earlier this year. I’ve been curating the performances at Circus, a restaurant and cocktail bar in Covent Garden, for nearly 3 years now, and it’s something I’ve enjoyed doing on an anonymous level. I’ve wanted to do something I could put a personal stamp on, but I would never have done anything about it.

What made you go for it this time?

Bioux unconsciously forced my hand by suggesting we called the new show Boom and Bang Circus. I realised too late that putting my name on it would mean I would have to run it, in part, as my show. I’m terrified, but also really looking forward to it.

What’s so terrifying about it?

I think I’m the only one who is unprepared here, if I’m entirely honest. I’ve always been a fly-by-the-seat-of-your-pants kind of performer. December’s shows will be very much a work in progress for me, but still packed with polished and entertaining acts.

How do you find the time to develop a new show and keep up your busy performing schedule?

When Bioux and I had the run of shows at the Hippodrome confirmed, I was in Miami, working on William Baker’s new circus show, Orchid. Everything has been done by a series of increasingly frantic emails and half-asleep Skype conversations. But I have a totally baseless optimism that it’s all going to go well. 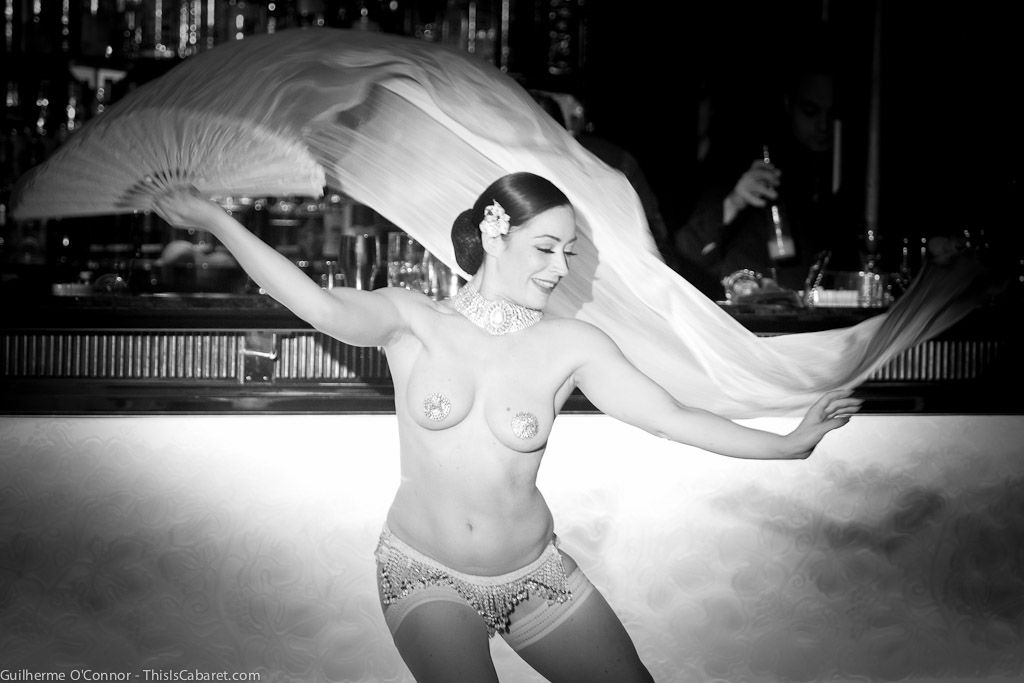 What can your fans expect for this show, after seeing you frequently at weekly shows like, say, La Rêve?

Boom and Bang Circus is the late night, hard-drinking, stylish older sister of La Rêve. They share one parent, but had very different upbringings. Dusty Limits is one of the main hosts for both events, so obviously comparisons can be drawn. La Rêve had such a large space to fill at Café de Paris. Boom and Bang Circus starts when all London cabaret creatures have finished work, and when the show finishes you won’t be ushered into a tiny room while the main club fills up with sweaty people listening to terrible dance music.

Are you creating any new acts for the launch?

Yes! I will also be working in conjunction with Dusty to bring some other elements to the show, which is the part I’m looking forward to the most.

How are you preparing for the new show?

It has been a really intense process with possibly slightly too much extra-curricular drinking.

This will be your second season at the Hippodrome. How has the venue affected the show?

The Matcham Room is the main reason that Boom and Bang Circus is happening. When they offered us the use of the venue, we couldn’t say no. The room is large, but not so large that I can’t get out there and touch each and every one of the audience if I choose to. It has just the right level of intimacy. When performing with Between The Sheets, the waiters replaced every single drink I stole from the audience. That is service for you.

Were the Hippodrome’s unusual opening hours a factor in the creation of Boom and Bang Circus?

I wanted a show that could be a late-night performer hangout. They serve food 24 hours and cocktails until 5 AM. These details are important to a rum-soaked burlesque performer. Expect the cast in your lap and dancing in the booths. And by cast, I mean me.

Is this the first time you and Bioux have co-produced a show?

I was there for the inception of Boom Boom Club, but this is the first time that Bioux and I co-produce a show. We have always collaborated, but there was a degree of reticence about working together. Principally on my part, because I know I’m a pain in the ass to work with. But Bioux and I get excited about the same shows. We love cabaret, and had a similar vision for where we wanted our careers to go next.

How did you two meet?

I met Bioux through Vicky Butterfly about four years ago, when he was deejaying at a bar that we were both performing at. After a couple of weeks, I decided I liked him better than anybody else I had ever met. Boom Boom Club came about a few months later, and I’ve been in more or less every production that Bioux has been connected with. I suspect this is mainly because I was the only act he could pay with a pint of cider and a kiss.

Boom and Bang Circus debuts on December 6th at the Matcham Room of the Hippodrome Casino in Leicester Square, with six more dates this year. See www.hippodromecasino.com for details and tickets.