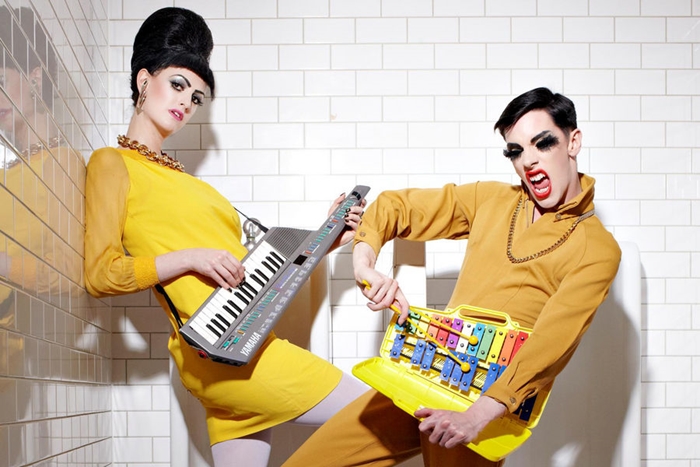 Those crazy kids Bourgeois & Maurice have stepped out of the shadows for another series of must-see concerts. 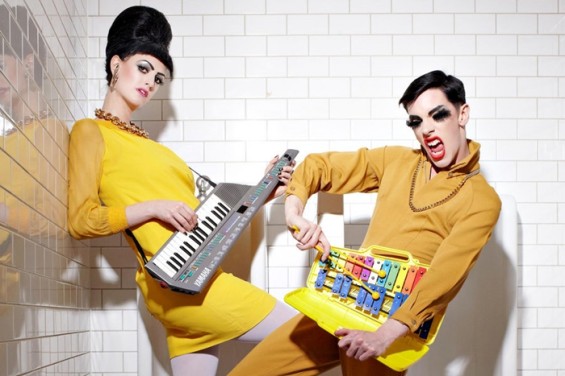 Bourgeois & Maurice talk to us about fashion, Cameron and megaphones.

The neo-cabaret musical freakshow siblings with the smart tongues and smarter outfits will be rolling into Soho Theatre again next week with their new show Sugartits.

The title may be a possible reference to that Mel Gibson incident but what is definite is that fans will have a chance to hear new songs from the duo’s brilliant third album which has tracks like Social Networks (Makes Me Feel Shit Sometimes), The Lizard Men and Privacy’s for Paedos.

Encountering them in one of their more lucid moments, we asked them some pertinent questions. And then some impertinent ones.

Bearing in mind the title of the latest show, what has been the strangest thing you’ve called someone?

As the nights draw in, we can see ourselves stalking you much more on Twitter than we already do. How do you feel social media platforms have changed the way you relate to your audience since you began? Do you make a conscious effort to tweet every day?

We’re very intermittent with our tweeting; like all good social interactions, it is very dependent on alcohol consumption and what’s on TV. We know our audiences are desperate to know about our every move so, whenever we can, we post pictures of our dinner, report on our bowel movements and pick fights with people whose opinions we don’t agree with.

Maybe the biggest change brought about by social media is that, in the olden days, we used to walk the streets with a megaphone proclaiming every compliment we received and now we can do it at the click of a button. Over and over and over and over again…

You describe yourselves as “part catwalk freakshow” and have a self-proclaimed “truly astonishing” wardrobe. What are your fashion tips for Autumn/Winter 2013?

We predict “truly astonishing” trends for the winter season which will involve darker, warmer tones than the summer looks because fashion is wildly unpredictable like that. Fashion adventurists should look out for new ideas such as the “coat” – a heavy garment usually crafted from paint – and the “sweater” which is a wooden box-like construction worn on the upper half of the body used to draw out toxins.

Our tip is think “adornment”: Fred Butler’s accessories are a futuristic colour and glamour explosion that will jazz up any Primark tee. Similarly an experimental-ist hat by Noel Stewart will make sure people are well and truly paying attention to your head area. So you can wear any old shit on your feet.

Imagine David Cameron invited you to dinner. What would you say to him?

“As a lizard person, how do you find living in the sewers under No 10? Wouldn’t you rather just sleep in the bed?”

You’ve been working together for six years now and haven’t killed one another. Is murder something you see as a future possibility or do you have ways of keeping the relationship fresh?

Maurice buys Bourgeois flowers at least once a week, and treats him to a mani-pedi around his time of the month. Bourgeois makes sure he always looks good and there’s dinner on the table and a cold beer in the fridge when Maurice comes home.

If you weren’t mega-famous musicians, what job do you think you could do on the outside world?

And what most gets on your sugartits these days?

Finally, it’s already rapidly approaching the end of 2013. After your ad for John Lewis and your shows at Sadler’s Wells. we’ve kind of got used to Yuletide gifts from B&M. Do you have any special Christmas projects in the pipeline?

We’ll have to see which brand comes up with the most cloyingly sentimental ad campaign this year. That’s usually the impetus for a digital kick from B&M.

Bourgeois & Maurice will be appearing at the Soho Theatre from 9-21 September. More information on their shows can be found here.

And here are five Bourgeois & Maurice videos you should see before you die.