The Earliest Follies of Chaz Royal 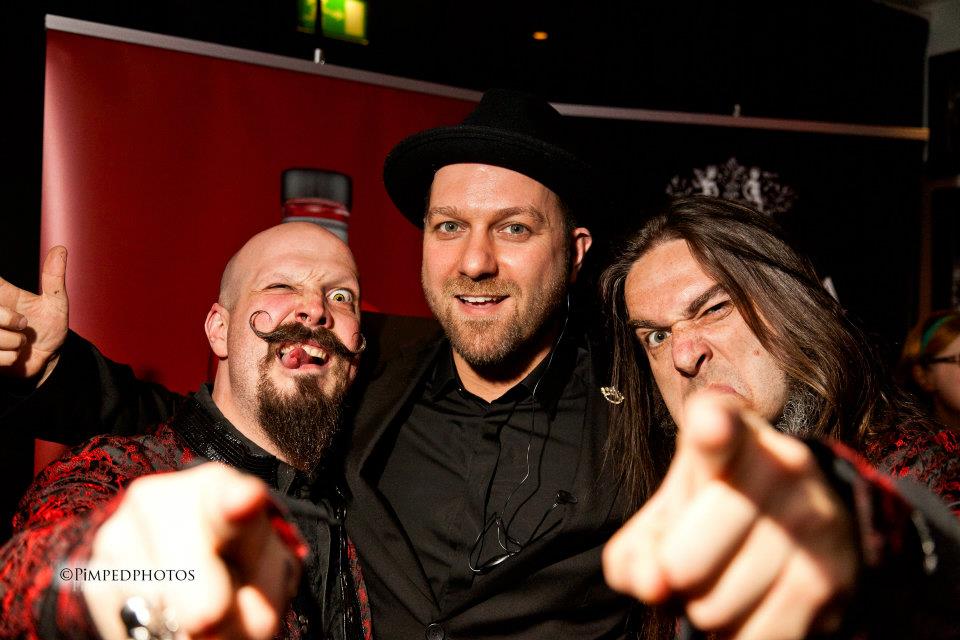 How did a Canadian kid move from organising punk rock gigs and skateboarding demonstrations to an international career in burlesque shows? C.J. Lazaretti looks back at the American tour that marked the beginning of Chaz Royal.

Bump-and-grinding has been a bumpy road for Chaz Royal. Over ten years in variety entertainment, the man behind hit events like the World Burlesque Games and Sexy Circus Sideshow has seen his field evolve from an underground clique of vintage enthusiasts into a budding industry supported by fashion labels, burlesque schools and international events. A decade ago, however, burlesque was a much harder tune to dance to. And a dirtier one as well, in many ways.

Names like Bettie Page and Tempest Storm had little currency beyond aficionados of old-fashioned erotica. As his collection of 1950s fetish images and nudie reels grew, a young Royal gradually developed a career in live music. Still under his real name, Mark Henderson, he produced his first shows in his native town of Midland, Ontario, at the early age of 14. Four years later he was booking events in Toronto, and soon afterwards nationwide tours, featuring American punk bands like The Gadjits and Leftöver Crack. Burlesque then was just a nostalgic interest.

“By the time I was 24, I was completely tired of working with musicians,” says Royal. “I wanted to take credit for the shows I produced. Sometimes in the music industry you end up working for the artist and get taken advantage of.”

That was 2002, and Vancouver troupe Fluffgirl Burlesque Society was beginning to make waves. Performer and producer Cecilia Bravo had founded the collective a year before, having produced the city’s first burlesque revues in the mid-90s. Infatuated with the idea of bringing risqué entertainment to new markets, Royal flew to Vancouver and drove across the border to see their show in Portland. It was the first live burlesque show he’d ever seen. In November, he made his fresh start with a new company, the pseudonym he’s still famous for and a three-week burlesque tour through the USA and Canada.

With no artist permits, Chaz Royal and the Fluffgirl Burlesque Society staged the first date of the Winter Follies Tour in Minneapolis. The venue was the Bryant Lake Bowl, a queer-friendly bowling lane and theatre. A second engagement was added when the first one sold out in advance. Business was off to a great start, but tensions among the cast members were rising with every new interstate trip. 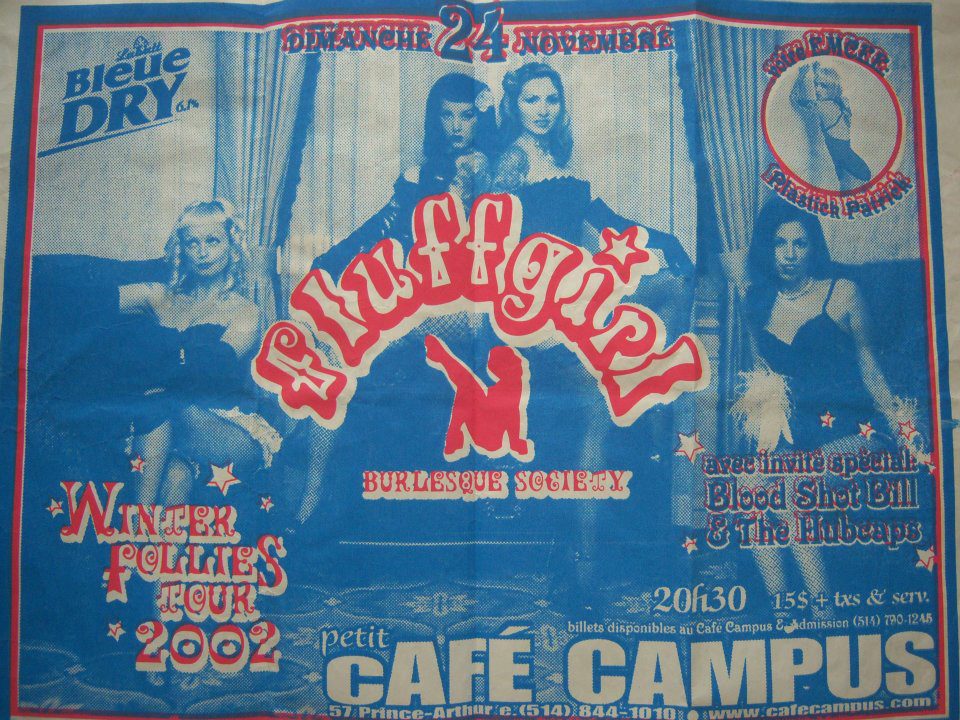 More sold out dates followed in cities like Chicago, Toronto and Montreal. Greeted by such success, Royal did not object when the dancers asked to be paid for the entire tour at the end of the first week. He would come to regret it sooner than he expected.

Shortly after arriving in Manhattan for guest spots and a full-length show at the Knitting Factory, their mini van broke down on Brooklyn Bridge, nearly causing a pile-up. Royal and Bravo spent the next few days towing it around, trying to get it fixed at different garages, in the middle of the Thanksgiving holiday. The rest of the cast, meanwhile, went on a shopping spree, spending much of their pay for the tour. By the time they found a replacement vehicle, it was too late: the girls had hopped onto a bus and gone back to Vancouver. 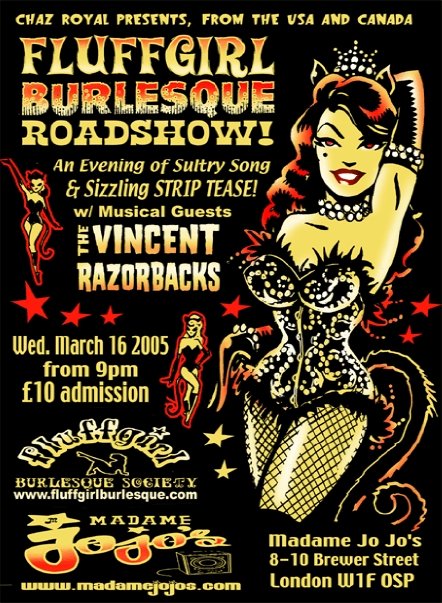 Flyer for the Fluffgirl Burlesque Roadshow in Soho

With the tour funds down by roughly US$ 6,000 from the deserters’ pay, Royal and Bravo recruited a New-York-based Australian dancer as a replacement and still managed to play shows in Pittsburgh, Raleigh, West Columbia, Atlanta and Orlando. At that point, more vehicular troubles added to their woes, and they decided to cancel the remaining dates in New Orleans, Houston, Austin, Los Angeles, San Francisco and Portland.

Back in Toronto in early 2003, Royal started auditions for new burlesque and variety talent. More shows soon followed, with extensive touring in North America and Europe adding up to more than 300 shows in three years. 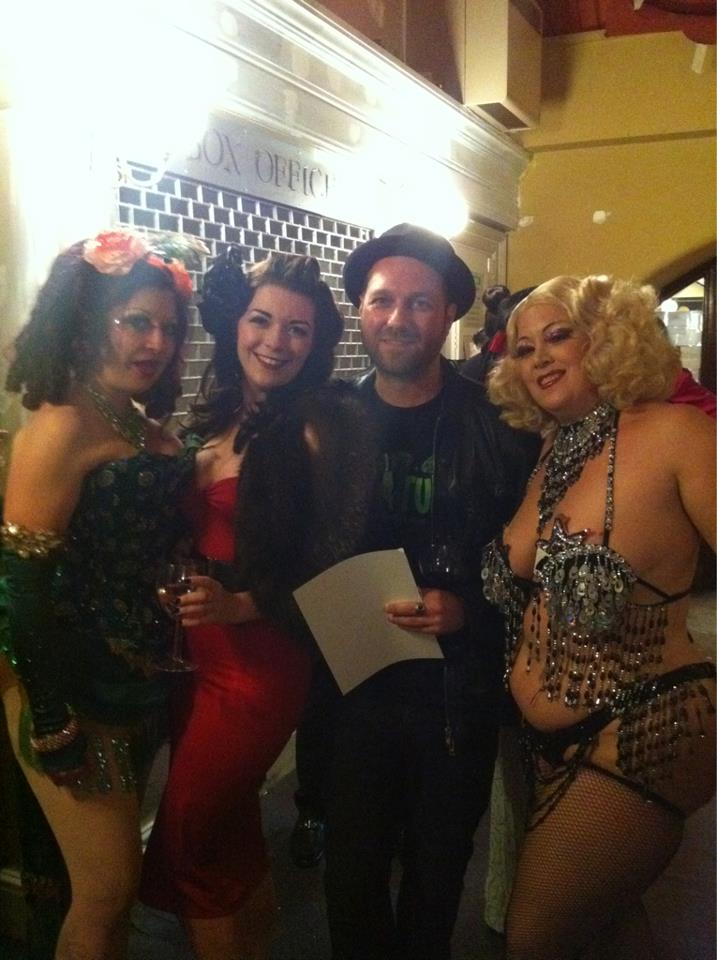 The Fluffgirl Burlesque Society disbanded shortly afterwards, with a track record including some of the earliest international appearances by Dita von Teese and The Pontani Sisters. Royal remained a partner until the end, booking British and American dates in its 2005 tour, also co-producing shows with Cecilia Bravo as recently as 2011.

The Chaz Royal brand quickly grew into a worldwide franchise that included the first editions of the Amsterdam Burlesque Festival in 2009 and the Australian Burlesque Festival in Melbourne, 2010. But the brightest jewel in the Royal crown is undisputedly the London Burlesque Festival. Its first edition kicked off in 2007, featuring Gwendoline Lamour, Roxy Velvet, Ivy Paige and other names soon to become stars of the London scene. In six years, the event has become an international variety landmark, championing experimental acts in burlesque, cabaret and circus as well as fine exotic dancers from around the globe. Where can it go from there?

“Only time will tell,” says Royal. “2013 will see the festival return to its original name, running for ten days between May 10th and 19th. I also have plans to expand with new festivals in Edinburgh, but most importantly, have been filming and producing shows for TV.”

Are the young Mark Henderson’s nudie reels coming full-circle? We’ll be there to see it happen. This Is Cabaret salutes Chaz Royal on the tenth anniversary of his burlesque career, and looks forward to the next decade.

Want to see what Chaz Royal’s got to show for after ten years in burlesque? Join the producer for Chaz Royal’s Ten Year Anniversary Celebration at Bush Hall on November 23rd and 24th. Confirmed performers include Luna Rosa, Loulou D’Vil, Marlene von Steenvag, British Heart, Lada Redstar and other British and International vaudevillians. See www.londonburlesquefest.com for tickets and details.

Photo credits: Pimped Photos (Chaz Royal and The Monsters of Schlock), other courtesy of Chaz Royal