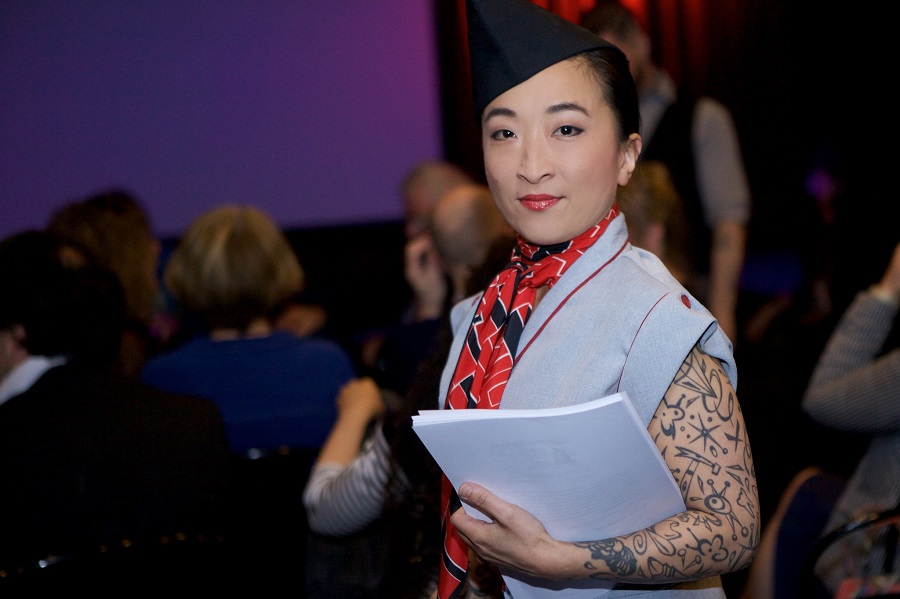 The times, they are a-changing. A year on from the Brexit referendum and nearly 100 days since Donald Trump became President, the political landscape in both the US and the UK is unrecognisable from where it was just twelve months ago. Who better to reflect on this fresh hell than Fancy Chance?

The performer has never had it easy: her birth mother abandoned her in 1974 and, despite twice looking for her, Fancy Chance has never found the woman who left her in a bag outside a South Korean police station. She spent her childhood in the US before moving on again, this time to the UK where she has developed a legendary career in cabaret. When not hanging by her hair for the Double R Club and Café de Paris’ Seven Sins, she is widely renowned for her ability to fluidly move between the worlds of burlesque, drag and performance art.

Next week, she appears in her own show. Flights of Fancy is her very personal take on many issues recently thrown up on both sides of the Atlantic, not least race and immigration. We spoke to her about what she thought about where the world was going.

Last year I did a third version of my solo show Flights of Fancy at the Soho Theatre for a couple nights. It was two days before the Brexit vote and four months before the latest U.S. election.

As I’ve spent more time on this planet, I can safely say that I’m never surprised but can often be disappointed.  The outcome of the referendum in the UK to leave the EU and Trump being elected as the US president (along with the Republicans owning our asses) has left me disappointed but also hopeful because people have been shaken into action including myself.

At first, after both results came in, I was shell shocked, depressed and anxious.  The hubris of the powers that were was astounding.  Why the hell were “IN” stickers being passed out in the London borough of Hackney who had the highest percentage of “remain” votes?  Where the hell were they in all the bloody places hardly touched by immigrants but benefitting from EU initiatives?  Why did the US democratic party think that someone was a shoe-in just because they weren’t a pussy grabbing rich fuck who “wins bigly”?

After this cluster of suck right wing voting happened, the subjects and themes of my show took on a different urgency. I’ve been an immigrant twice: once practically under the circumstances of being a refugee, and the other because of marriage. I think because of this and also being a minority and a woman, it’s made me more aware of the politics swirling around us and has changed and shaped what I’ve ended up creating and participating with on stage.

A theme that keeps coming back to me is empathy and compassion. I collaborated with Nathan Evans (my director and collaborator for Flights Of Fancy) for his production of I Love You But We Only have 14 Minutes to Save the Earth. The idea was that a number of performers created a 14 minute act on how or what would save the earth. For my piece I thought, if people would just take a moment to consider the people around them, we wouldn’t be in this fear-mongered shit storm flowing to the right. The only power I have is to air out my complaints on stage but also, 14 Minutes really let me sink my teeth into also making arguments for solutions.

Who am I if I think people who voted for Brexit or Trump are complete xenophobic idiot racist assholes? My conversation with half of humanity stops there.  Also, I have to ask myself, what more can I do to affect change? I have to be tricky with my satire and but, at the same time, bold and unafraid of my truths and my past to make my complaints and urgings potent.

In Flights of Fancy I get to have a conversation with the audience about my personal history and present my opinions on beauty standards, casual racism, ethnic identity, sex work, immigration, social media, gentrification and finding love and family in this ever changing and at times alienating world. I hope it’s wrapped in a bow that moves people to think about the world and the humans around them and leaves them with a few giggles in their bellies and conversations to revisit.

Fight the power!
Be bold!
Be kind!

This is not easy.  None of this is easy in these times.

[disclaim]Flights Of Fancy will be at the Soho Theatre from 25-29 April. More information can be found on the venue website.[/disclaim]