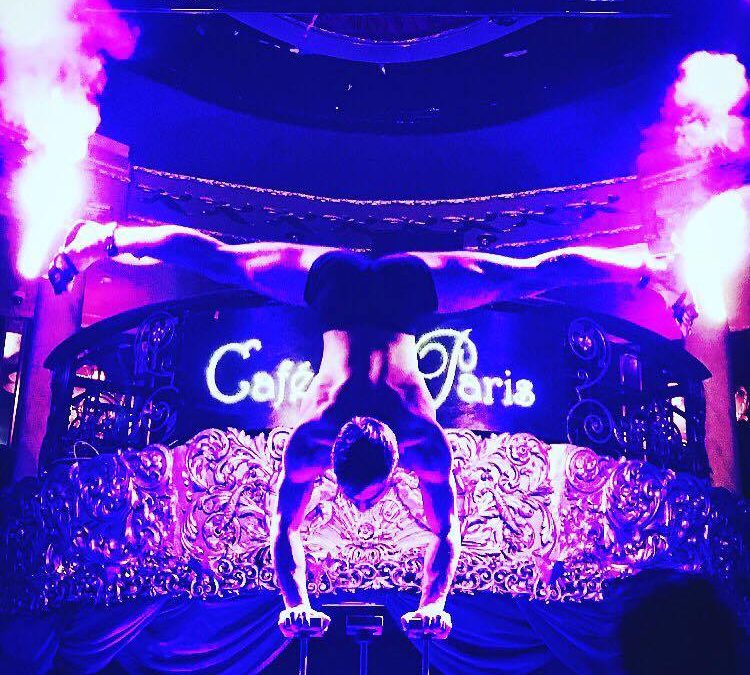 Who among us has not sinned? The seven deadly sins we all know and practice were first listed by Pope Gregory The Great back in AD590 and it was he, the patron saint of musicians and singers, that decided upon the septet of lust, gluttony, avarice, sloth, wrath, envy and pride. If you’re not sure what any of those mean, ask a musician or a singer.

In modern times, we see these sins differently. To paraphrase writer Ferdinand Mount, greed has been rebranded as retail therapy, anger is communicating your feelings, vanity is the neverending picture roll of selfies, gluttony is the religion of foodies and sloth and lust are now known as “Netflix and chill”. Hey, sinner, how you doin’?

Taking as its concept these ubiquitous vices, Seven Sins is the latest Friday night show at Café de Paris. It is dark, theatrical and thought-provoking – none of which should be taken for granted in an age when The Stage still thinks of cabaret as “light entertainment”. 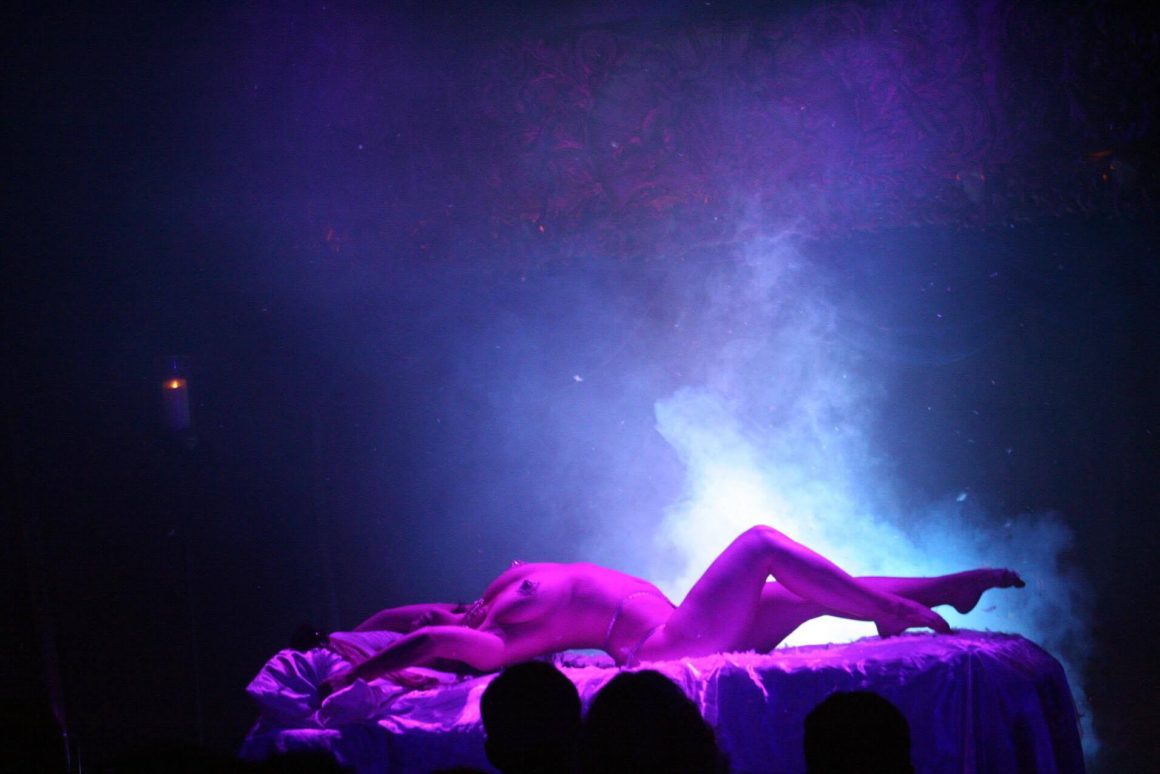 As Seven Sin’s writer, director, compere and singer, Reuben Kaye is the show’s pivotal figure and there isn’t a square inch of it that doesn’t have his particular imprint. Five years ago, the Café’s Friday night show was the stomping ground for Dusty Limits and now the baton has been passed to his fellow Australian, one who holds sway with a swagger all of his own; while the former revelled in his aloofness, Kaye takes to the audience like a heartbroken girl to white wine and boxsets.

Theatrical cabaret is a double-edged sword. The idea of a show with not only an underlying theme which connects and contextualises the acts and has some semblance of direction and a script is not novel in London, but it is increasingly rare. If done well, it can lift the spirits, transport us to another time and space and even justify eye-watering booze prices. When done badly, frankly we all wish we were elsewhere.

This is Kaye’s star vehicle but he’s happy to share his ride with a variety of fabulous folks who bring each sin to life. As the avatar of “gluttony”, sword swallower extraordinaire Snake Fervor expertly chows down on both a huge spoon and a similarly sized fork at the same time while up-and-coming circus star Beau Sargent as “envy” shows plenty of flesh and talent as he dazzles on the aerial hoop.

Burlesque is not short on queens but the UK can count Bettsie Bon Bon as one of the finest exponents around of the classic style. Aptly enough for a portrait of “sloth”, her routine starts at a luxuriously slow pace but soon zings into a zany strip which climaxes in an explosion of feathers. Likewise, Anna The Hulagan’s take on “pride” has a ponderous beginning before she brings on the crazy with the aid of two assistants wielding angle grinders. 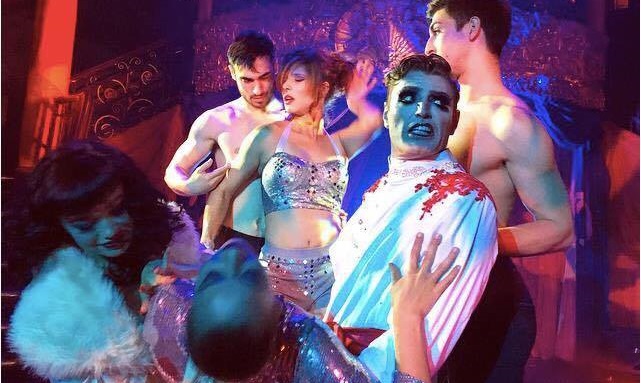 One example of the theatrical chutzpah of this production is seen at the beginning of the second half. An altar with lit candles on small pedestals is solemnly approached by a young priest, dog collar and all. In a matter of moments, the candles and collar are removed, acrobat and Sins choreographer Sammy Dineen (for it is he) strips off the rest of his outfit and mounts the pedestals for a sublime display of hand balancing in the name of “lust”. Somewhere along the line, while still upside down, Dineen’s sandals are set on fire before he, um, “hotfoots” it off stage. What began as a trompe d’oeil ends as a triumph of stagecraft.

And that’s not even the most spectacular of the acts. In a contest more closely fought than a boxing match in a lift, the prize would have to go to Fancy Chance’s display of “wrath”. Hair-hanging has had something of a renaissance in recent years in the circus community and has proven to be both beautiful and hazardous. In the hands of someone as multi-talented and creative as the diminutive American, it transcends the eye-watering and becomes a thing of beauty. Her hair-hanging has already been seen at The Double R Club last year; for Seven Sins, she turns in a superbly-crafted portrait of physical poetry which mesmerises and astounds at every turn. 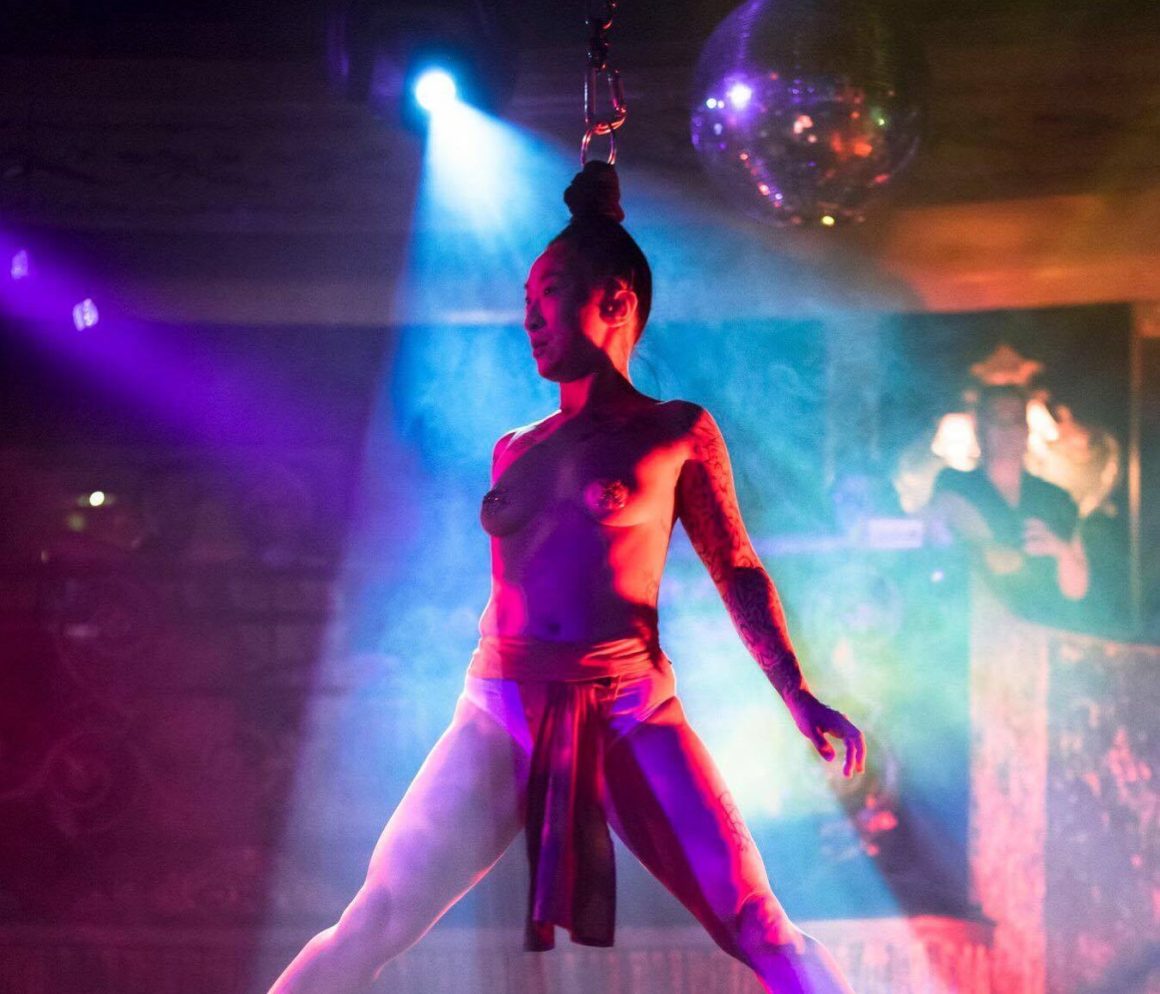 Last, and not least by a country mile, is Chrisalys and his excoriating exploration of the cardinal sin of avarice (or greed). One of the UK’s finest exponents of theatrical cabaret is no stranger to the Café de Paris – his “barbecued baby” act in Sins’ predecessor Cabaret des Distractions still burns brightly in the mind – but this may be his best creation yet.

With more twists and turns than the backstreets of Marrakesh, this is a routine for the ages. Appropriately enough masked up as his Mr Pig character, he bounds on stage in a black suit, with a glass of whiskey in one hand and personalised bank notes in place of a pocket square. Every inch the arch-capitalist, he sprays the notes around and sets furled umbrellas ablaze before swigging lighter fluid from a champagne bottle and breathing fire into the Café atmosphere.

In a brilliantly conceived manoeuvre, Chrisalys throws off his dark garb to reveal a white suit underneath. Now, art and economics graduates will likely be intellectualising that switcheroo while waiting for the barista to hurry up with that skinny latte but here’s one perspective: from a banker flaunting his wealth and ego, we are now presented with the same person dishing out dosh like there’s no tomorrow in the name of philanthropy. Gordon Gekko said that “greed is good”; here, Chrisalys’ “greed” is nothing short of an exhilarating tour de force. 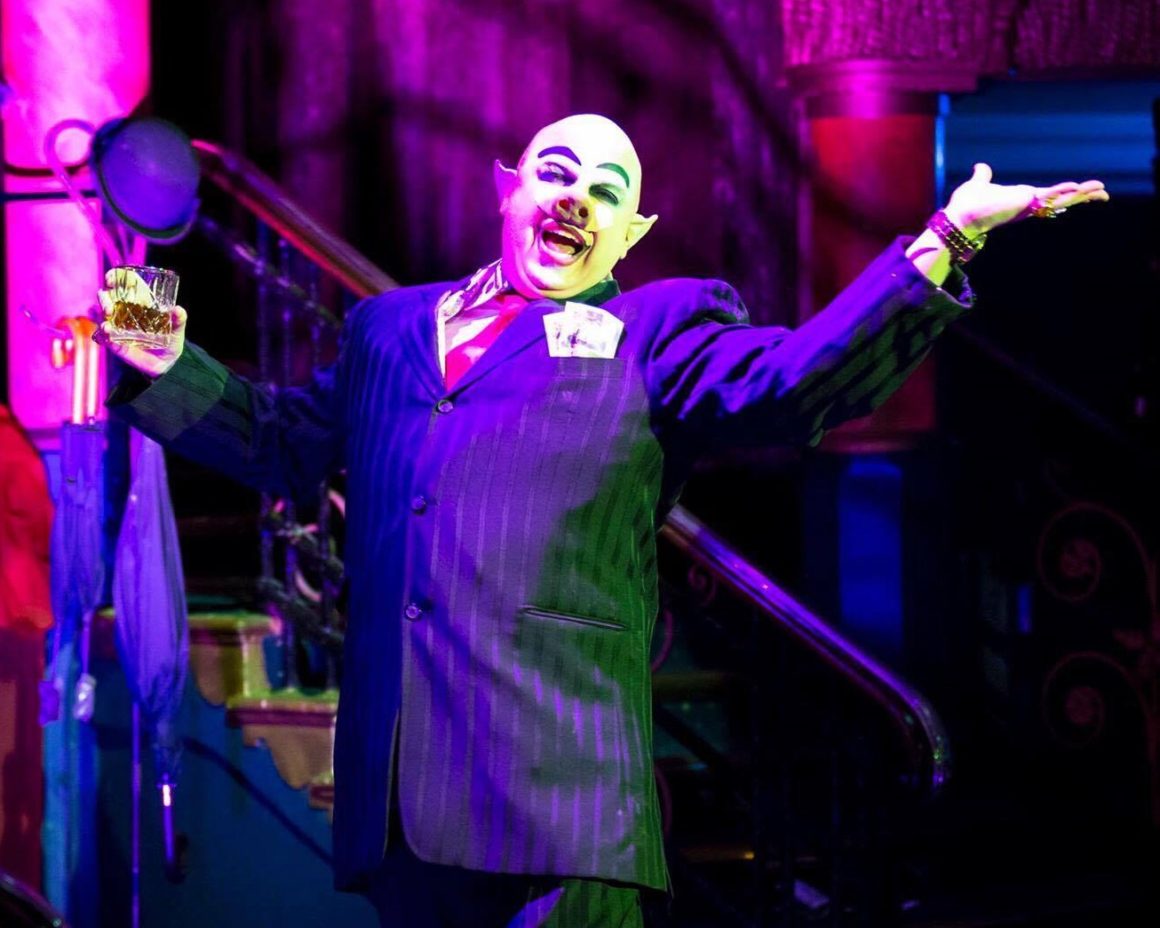 It’s all about the “greed” for Chrisalys at Seven Sins, Cafe de Paris. Image: Verena Gremmer

Seven Sins is far more than a loose collection of talented artists and a theme. There is evidence everywhere that the sum is greater than the parts and there is plenty of cast collaboration to enjoy. Dineen’s show choreography is inspired, making sure every act feels like a team effort with the central performer aided and abetted by one or more colleagues.

For his part, Kaye’s lips do double-time – when he’s not laying down a barrage of witty one-liners or verbally molesting the masses, he peps up the stage action with his live singing; most of the tracks were chosen by himself and arranged by musical director Andrea Biondo with contributions from vocalists Lili La Scala and Coco Malone, pianist Jaz Delorean and Des O’Connor on saxophone. Finally, the richly detailed costumes by Bettsie Bon Bon and Lia Parravinci of Fallen Feathers are visual treats in their own right.

So what does this all add up to? Quite a bit. Given all the qualities above, everything points to Sevens Sins being the finest regular cabaret show in London. Frankly, as long as it keeps up the quality, it deserves to have its own pedestal out in Piccadilly Circus. Moreover, it means that, under producer Tom Gravett’s aegis, Café de Paris can be spoken of in the same breath as French luminaries Moulin Rouge and Crazy Horse. If Brexit leads to British punters seeking home comforts over foreign fun, that’s all to the good: Seven Sins is proof enough that London is a skyscraper in the global cabaret landscape.