Fancy Chance Goes Back To The Beginning In Her New Show 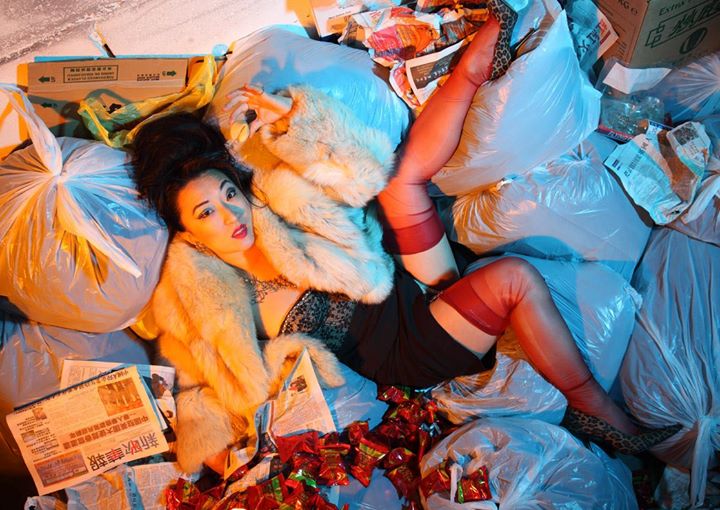 In a scene which thrives on variety, Fancy Chance has one of the most diverse repertoires of all. We’ve seen her as a drag king at Alternative Eurovision, stripping at the Hebden Bridge Burlesque Festival, hair-hanging at The Double R Club and The Raunch and telling about her earliest days as part of Nathan Evan’s ensemble show I Love You But We Only Have Fourteen Minutes To Save The Earth.

She has teamed up with Evans again for her new one-woman soirée Fancy Chance: Flights Of Fancy which will be at Soho Theatre on 21 and 22 June. Once again, she’ll be talking candidly about her childhood in Korea and America and her inexorable rise to being one of the most unpredictable stars of the London cabaret scene.

Before she tells the audience everything, we got our own exclusive insight into this much-admired performer and put to her some of our most burning questions.

Let’s get the most burning question out of the way first. What’s the inspiration behind your name?

It’s actually quite simple. I was asked to by Indigo Blue to be in BurlyQ: A Queer Cabaret burlesque troupe and had to choose a stage name. I liked the term “fancy pants” and the song Fancy by Bobby Gentry and decided do a play on words. Ironically it makes more sense in the UK but rhymes more with an American accent.

How does this show related to your part of I Love You But…? Will you use that as a starting point or are you taking a new approach?

I gained a lot confidence in my performing capabilities with that show. It really showed how well Nathan and I work together, so it was only natural that I have a stab at doing a solo show. Most of the material is actually new but drawing on themes and subjects I’ve used before and I Love You But…. has inspired certain parts.

What still appeals about cabaret? What in particular drove you to perform in this corner of the entertainment business in the first place?

I’m still in this “business” partly because I don’t know what else I can do and there is a great sense of community and creativity all around.

I accidentally ended up in cabaret as a “profession”. I started out just doing weird dance and band projects as a hobby. When I did burlesque, I found out that my sense of humour translated well on stage.

In the early 2000s, neo-burlesque scene was still quite varied and had a playful experimental punk quality to it; it really gave me an education about stagecraft without the pressure of trying to satisfy the audiences’ expectations. Next thing I knew, I was getting booked and I was working harder to create interesting and fun pieces and was eventually able to support myself.

Fancy Chance hair-hanging as part of The Double R Club’s 2014 show at the London Wonderground.

You’ve covered more genres than most cabaret artists, not least drag, circus, burlesque and performance art. What gives you the impetus to explore new areas rather than, as some do, just mine one particular art form?

I think all of them can overlap and I’ve just naturally ended up covering those different genres because it it was what was asked of me either by myself or a production.  As the years of experience have increased, I find that I can’t actually stick to a particular art form.

Do you ever worry about repeating yourself?

I worry about being good. I don’t care about repeating myself as long as what I’m doing is quality shit.

Through all your different acts, would you say there was an artistic or personal thread through them all?

Absolutely! I find that the only good material I’ve created has come from something that I’ve taken a personal interest in or draws from my experiences.

Do you have a preferred or typical creative processes when working on new acts or the latest show?

Full on freak out mode, wine and a hot glue gun.

You often work alone but you are currently appearing in as part of Empress Stah’s The Raunch. What persuaded you to join the show?

I’ve known and worked in the same circles as Stah for ages now and loved the concept of the show. I really didn’t need persuading.

Stah is the director but we developed the acts that I appear in together with the songs that had been chosen. It’s been amazing hair hanging so many times in a row. I really feel that part of my skill set is improving.

One of our favourite routines of yours sees you transform from a Kim Jong-il character to Prince. Where did you get the idea for that pairing?

I think I’ve only done the Kim Jong il to Prince once! I did it for Alternative Eurovision with the most hilarious set of backing dancers. I do believe I got cabaret royalty to dress in skimpy leotards, sunglasses and scarves. I had already been satirising Kim Jong Il for ages and had been doing lots of appearances as Prince and thought pairing them together for Eurovision was perfect. North Korea was like Israel.

Now that both men have died, have you retired it?

Only when I DIE.

Fancy Chance can be seen in her one-woman show Fancy Chance: Flights Of Fancy at Soho Theatre on 21 and 22 June.