Don’t Cry For Me, Ardent Reader: Occasional Musings Of An Assoluta 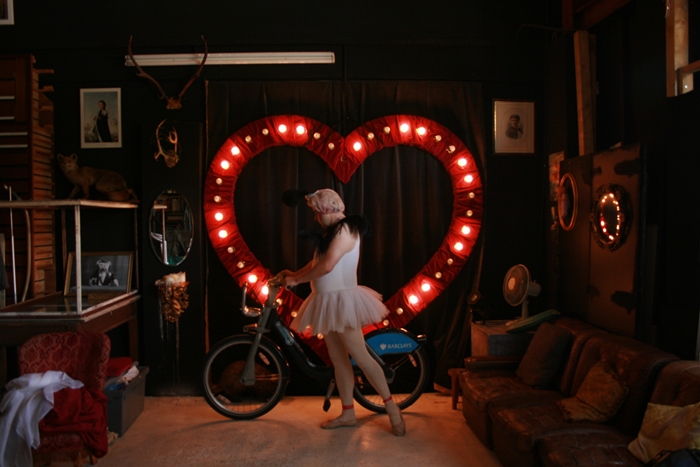 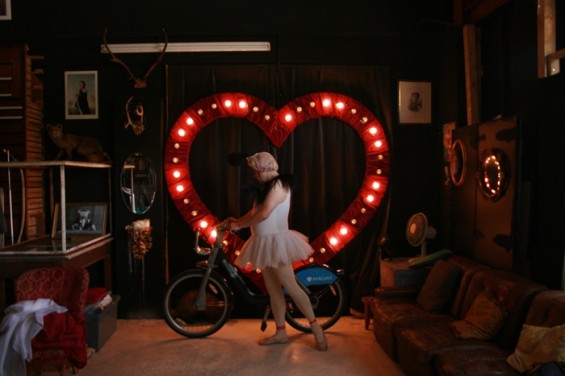 Globe-trotting ballerina Madame Galina: try saying that with a mouth full of marbles.

It is not unusual to find burlesque dancers with a background in other dance forms but to Iestyn Edwards ballet in particular has given him a career on stages across the globe. As Madame Galina, he has entertained the troops in ex-comrade-in-arms in Afganistan and Iraq, performed for Her Majesty and around London has appeared at Volupté, the Café de Paris and the Hippodrome Casino.

We were keen to find out the story behind one of his more spectacular set pieces, his fouettés. Little did we know this lead to a tale of a paranormal opera fan, petrified children and sweary Christmas antics in the hallowed halls of Asprey. Take it away, Iestyn…

My Royal Marines Commando mucker Stacks defines fouettés thus: “The daft chubster going round and round on the spot with one leg in the air doing a reverse hokey-cokey and never touching down.”

I first turned the legendary thirty-two fouettés in the foyer of the Royal Opera House, Covent Garden when I worked for ex-ballerina Stella Beddard in the bookstall there. For two years I’d been doing four practice sessions daily on them, usually conking out around the fourteen or so mark.

“Leg side, whip leg behind knee and repeat. One turn after another, don’t count them,” Stella continually admonished. “Stamina is what’ll get you to thirty-two.”

Until, one evening in the foyer, Bethgate happened.

Beth, with her width and slicked hair brought to mind Olive Oyl run to fat. Her insurance broker family bribed her twice-monthly to stay away from them and theirs. She never missed a performance by the Royal Ballet, and she believed that the spirit of legendary ballerina Marie Taglioni had latched onto her in the garden of the Pavlova Museum on July 14 1977. According to and through Beth, Taglioni began psychically “helping” Royal Ballet dancers with their performances. She never forgave herself, apparently, for failing to prevent Principal Wendy Ellis’ spectacular fall in Symphonic Variations.

“Both wrists broken,” Beth had commented. “Poor Madame Taglioni was beside herself in my aura. Crying real ectoplasmic tears.”

Beth wasn’t watching the performance the night of Bethgate. She had called in to wash her tights in the Stalls Circle ladies. In the middle of the foyer, I danced “The Entrance of Princess Aurora”, the “Fairy of the Woodland Glade’ then conked out after nineteen fouettés.

“Oh, bloody bum!”
“Now none of that,” Beth said, in her softly-modulated cockney-gentry voice. “You just do those again and keep your eye-line on my forehead. I’ll get you through them with thought-transference.”
“I can’t,” I said. “My left leg’s had it for the day. It’s gone dead.”
“Let’s try them again.”

I did as she said and, even with the dead-leg, turned thirty-two fouettés for the first time. Since then, like chips in a greasy spoon, I’ve served thirty-two fouettés with everything. I’ve slipped off the stage onto the grass at the Llangollen International Eisteddfod doing them; given a woman a burst blood vessel from cheering them at Swimbridge Village Hall; and moved off the spot onstage in Stockholm and accidentally kicked fellow variety turn Kai Eichermann (a bald half-Ghanian half-German clown who had just stopped pirouetting on his head and was now imitating a can of coke being spat into the hatch of a vending machine).

Wondrously, lately it’s been fouettés galore at the mothership Volupté, for the Wam Bam Club at Café de Paris, for Boom & Bang Circus at the Hippodrome Casino et al.

But regretfully, it was also fouettés for the Alice in Wonderland Christmas Installation at renowned Asprey of Bond Street. Playing the Queen of Hearts I was already on notice for terrifying toddlers shouting “Off with their heads” and for telling them that the Cheshire Cat wasn’t there today because he was at the vet’s having the snip.

Dancing the Croquet Calypso accompanied by a string quartet dressed as the Club’s court cards, I shouted “too fast for fouettés, you fuckers!” and Mr Asprey himself asked me to leave.

That’s where Kitty Bang Bang started shrieking at me that I’m not to ruin any more Christmasses.

Photo credit: The House of Black

You can find out more about Iestyn Edwards and alter ego Madame Galina on their official website.