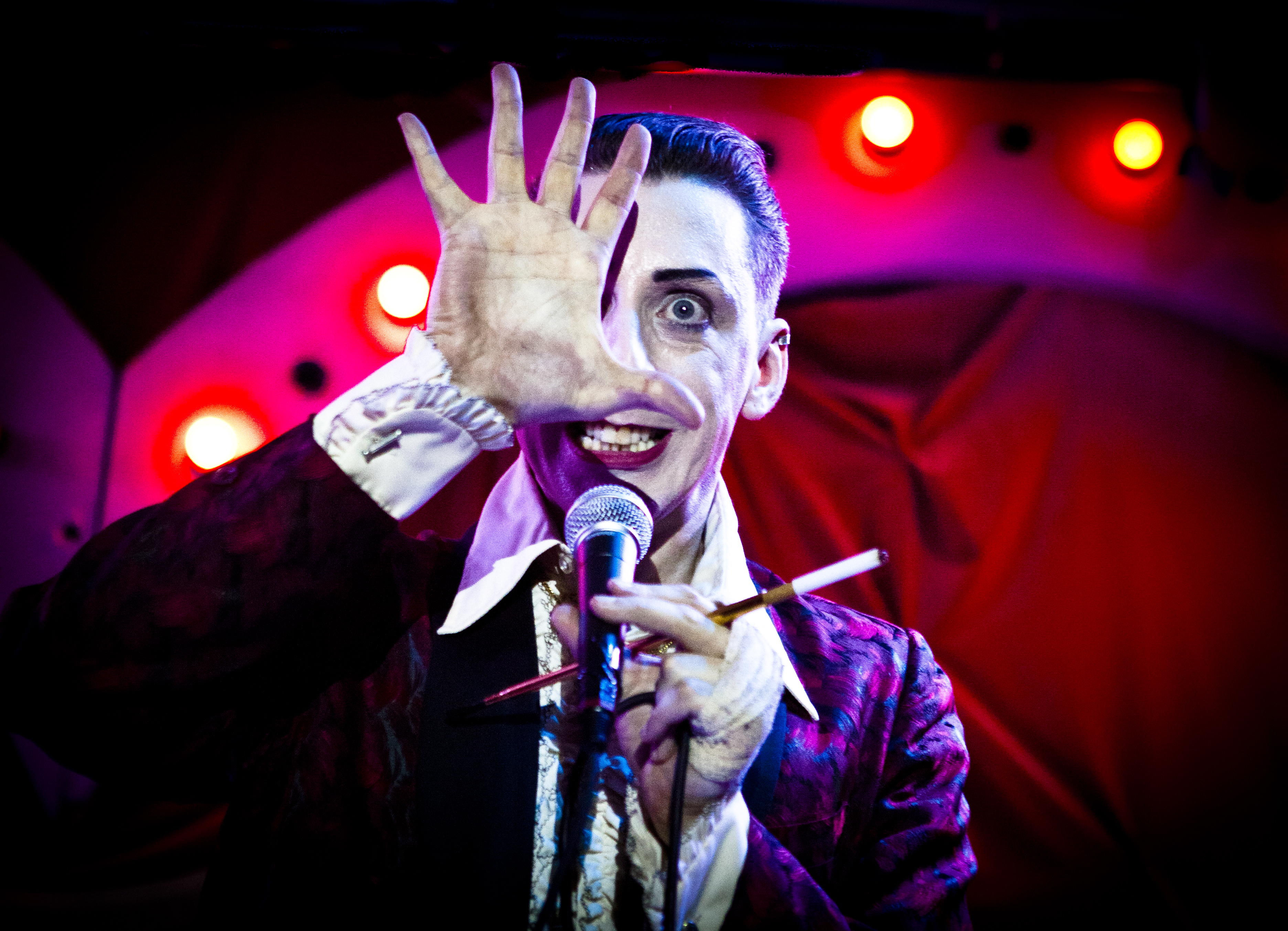 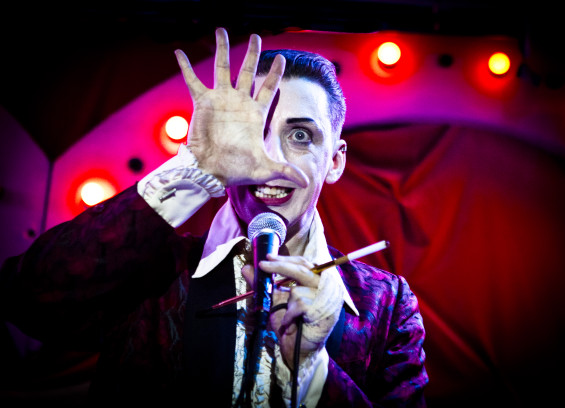 Benjamin Louche’s one-man show will be at Fontaine’s bar from 26 to 28 March. Image:: Martin Soulstealer.

Later this month Benjamin Louche, the suave yet sinister compère and co-producer of the Double R Club, takes a temporary step away from the Lynchian production. For the first time, he will take to the stage to front his own solo show at Fontaine’s in Shoreditch.

The wall-to-wall Louche experience will see the man who walked off with the 2014 London Cabaret Award for Best Host take an audience back to his roots. Who is the man behind the white mask? Who – or what – inspires those mesmeric monologues with which he introduces each act? And what artistic impulses have led him on to delve deeper and deeper into the inky darkness that he so revels in?

There’s only one way to find out. Gulp.

How would you characterise your childhood? Was it a happy one?

I’d say very happy. I’m well aware that anyone who sees me perform might suppose that all this anger and dark inclination comes from some childhood trauma but it really doesn’t. In fact one of the questions that Being Louche asks is just how I could have sprung from the loins of my parents, who are perfectly normal and frankly lovely people. There is one somewhat infernal theory I propose but I won’t spoil it…

Where does your interest in the arts come from?

This too is something of a mystery. None of my family are theatrical in any way. My mum still tells a story of how her father forced her to sing in public as a child and how horribly traumatic she found it.

So are either of your parents performers?

I’d say my dad is sort of almost a performer, he possesses a certain performative inclination but without the urge to do it in front of strangers. There’s a kind of low-level, slightly rougher around the edges Eric Morecambe-ness to him. He’s the kind of man who, when we were all sitting watching television, would get up, lope bizarrely across the room to the door, Quasimodo like, then turn and say quite normally “some people walk like that, don’t they?” then just leave the room. Strange man.

You’re renowned for your involving introductions to the different acts. How long do they take to write?

I usually write and rehearse The Double R for two weeks, though I have managed it in less when circumstances have demanded. Perhaps foolishly, and despite any and all success in the area, for a number of years I have thought of myself first and foremost as writer, and so if I’m not writing The Double R I’m writing something else. I keep telling myself that if you can’t write thanklessly and in obscurity, then what kind of writer are you?

Who would you say were your chief artistic inspirations?

David Bowie was an early (and continuing) inspiration, the idea that a boy could dress up, make up, and present himself as something larger, something theatrical and strange, though not superficial, instantly appealed to me. The man’s a genius and I’ll fight three men and a wild bear who says he isn’t.

In terms of writing for The Double R, I’m often inspired by lyricists, the earlier work of Nick Cave and of JG Thirlwell (who performed as Scraping Foetus Off The Wheel among others) for example, who shared a kind of ugly, brutish black humour in their storytelling. I’ve always written poems and always enjoyed rhyming, having loved Dr. Seuss, Kit Wright, Edward Lear and Pam Ayres as a child. That’s when I was a child, not Pam Ayres as a child, who I’m too young to have known in her infancy. Though I’m sure she was charming.

How did you come up with the idea of a one-man show?

Many people had, very kindly, described my intros at The Double R Club as a sort of act that just happens to stretch for the entirety of the show, so I thought maybe people would actually sit still for a whole hour of uninterrupted Louche; I may have been terribly wrong, we’ll see.

Is there a particular reason you’ve chosen Fontaine’s as a venue?

I knew I wanted somewhere intimate, as the show I had in mind was less grand theatrical spectacle and more conversational, at least in part. When Emerald showed us The Bamboo Lounge downstairs at Fontaine’s it seemed perfect. That and Fontaine’s is gorgeous, and the cocktails and food are unfathomably incredible, so if no one turns up there’s always gin and chicken-salt chips.

We recently saw you acting at the Barbican as part of Dickie Beau‘s debut play Camera Lucida alongside Matthew Floyd Jones and Paddy Glynn. What was it like working on that production?

At first, I’ll admit it was somewhat daunting. Having seen Dickie on stage and been quite honestly blown away by him, by what feels like the impossibility of what he is able to do, it seemed like I could never fit in to his vision of whatever it was he wanted Camera Lucida to be; but nor was I going to pass up the chance to work with him. In the end it was an incredible experience and the show we presented I thought was amusing, deeply strange and strangely moving. I’m very proud to have been part of it.

Are you taking any more theatre roles this year?

There are no plans as yet but if the RSC get in touch I may be prepared to give my Hamlet. Or my Iago, which is probably a little more me.

Would you ever ditch cabaret for a full-time acting job? And, if so, would your preference be for theatre, TV or film?

We’ve strayed a little into the realms of fantasy here…I don’t really pursue the whole acting thing for a number of reasons, some of which are mentioned in Being Louche. However, if the right offer came along I would certainly think of taking time off from cabaret, though I don’t see it happening any time soon. I’m still waiting for that call to appear in the new Twin Peaks.

Benjamin Louche’s one-man show Being Louche will be at The Bamboo Lounge downstairs at Fontaine’s (176 Stoke Newington Road, N16 7UY) on 26-28 March. Buy your tickets here.