Come Again? Briefs Returns With Another Show Of Gender-Bending Circus 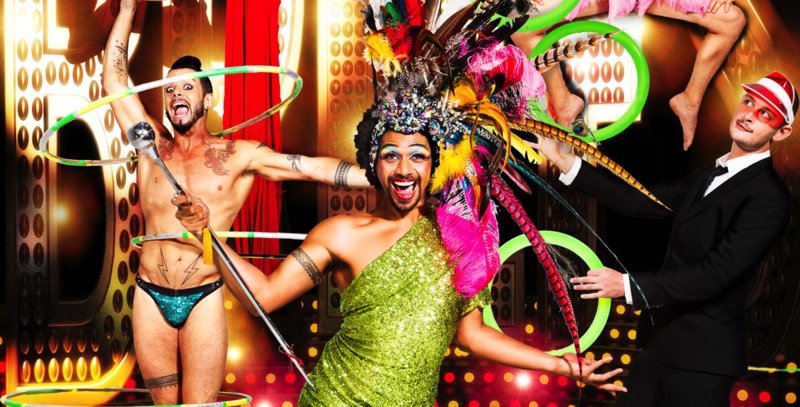 This month, Australian circus sensation Briefs builds on its summer successes at the Edinburgh Fringe with a welcome return to the London Wonderground. The new show, aptly named The Second Coming, was acclaimed by the critics and the audience alike; it was nominated for the Time Out & Soho Theatre Award and the punters raved about it on social media.

Briefs is an all-male troupe of gender-bending, body-beautiful demi gods who put their god-, gym- and glitter-given gifts to devastating effect in a blend of circus, burlesque, drag and lip synching.  It started in the back of a Brisbane bookstore in 2008 and since then has grown from strength to strength, touring the world and packing-in gleeful audiences and notable reviews along the way.

Much of the cast has changed from last year’s outing with only the drag hostess Shivannah and the award-winning King of Burlesque Mark “Captain Kidd” Winmill returning for the sophomore outing.  The new members fill out the ranks but do more than make up the numbers: The Second Coming demonstrates an enhanced level of polish and cohesion in group and ensemble routines in comparison to its predecessor. This is immediately evident from the off as the entire company comes together for a deliciously choreographed fan-dance striptease finishing with them left in the ultraviolet lit dark in their pristine tighty whities and complimentary white ostrich feather fans.

This second show from the all-male Australian troupe combines circus with drag and burlesque.

Shivannah takes the reigns over the evening which includes delivering her own stand-up routine. It very much borrows from the same script as she did the year before but her warmth and beguiling stage manner make this supremely forgivable.

The remaining cast are no less engaging. A fine example is Ben Lewis who delivers a dazzling display, suspended high above the arena in aerial straps. He flits between swooping phoenix and super hero; at all times he is dripping with pure masculinity, strength and elegance as he winds his perfectly toned body up and down and all around the straps, cutting shapes and attitudes that are so breathtaking that you cannot take your eyes off him and you want to possess him as much as his body has you.

Whilst Lewis’ performance is very much in keeping with Briefs as set out in 2012, much of the rest of the show is dominated by ensemble drag routines with more than a flavour of the musical Priscilla Queen of the Desert. They are superbly conceived and executed with moments of humour, satire and glamour but, equally, their addition deprives the show of back-to-back compelling spine-tingling individual set pieces of the kind Lewis and Winmill deliver.

Instead the drag pudding is rather over-egged. This is no more apparent than in the inclusion of Dallas Dellaforce’s superfluous lip synching routine; in fact, the entire cast at one point or another are seen dragged up or lip synching or sashaying for their lives.  Adam Krandle (aka Evil Hate Monkey) provides a great comic side show with some lovely primate antics between routines and Louis Biggs is a delight and his quirky school-boy smile almost steals the whole show.

Make no mistake, The Second Coming is as much a joy to watch but it does not reach as deep into the psyche as Briefs’ debut show.