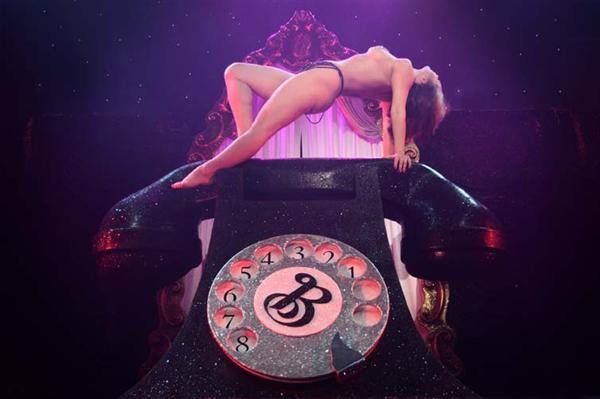 One of the most successful UK burlesque dancers ever will make a rare appearance this August at the Sexhibition weekender.

Of all the burlesque artistes from the UK to have gone to Las Vegas and competed for the highest prize of all, only one has come back victorious. In 2007, Immodesty Blaize became the Reigning Queen of Burlesque at the annual Burlesque Hall of Fame Weekend and none from this isle have followed in her footsteps (yet).

The Hertfordshire-born dancer and writer is known for her outsize props, not least a giant telephone (see above) and her signature oversized powder puffs which she used in her BHoF-winning performance. Since walking away with the most prestigious award in burlesque, she has released two books (Ambition and Tease, both set in the modern showgirl world) , debated at the Oxford Union and appeared in only a handful of shows in the UK.

For producer Cheryl Smith, the dancer holds a special place in the creation of Sexhibition. “Immodesty was really my first introduction to the world of burlesque in 2004,” she says. “When I saw her on Channel 4’s Faking It, I was absolutely captivated with her and that is what put me on the path to running events and ultimately creating Sexhibition, so it’s really come full circle for me.”

There’s plenty more apart from the supperclub – over 120 retailers will be on site as well as art, fashion shows, workshops and fetish areas. More names are due to be announced before the curtain goes up so keep an eye on Sexhibition’s website, Facebook or Twitter for further news.

Sexhibition takes place from 19-21 August 2016 in the Victoria Warehouse Manchester. Tickets can be bought for the whole weekend or individual days – see here for more information.