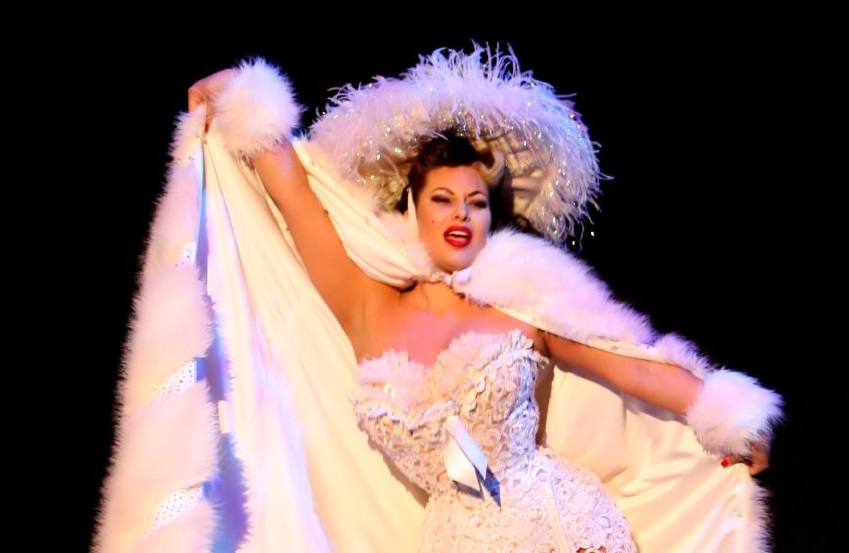 In 2007, Immodesty Blaize was crowned Reigning Queen of Burlesque. After a couple of years away from the UK, the Hertfordshire-born author and award-winning director returned to perform at Icon! in Brighton’s Emporium. 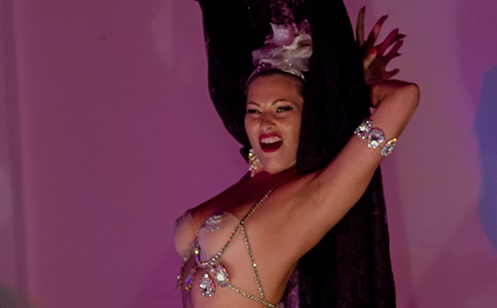 It has been a long time coming but the “European Queen of Burlesque” Immodesty Blaize has finally made her first appearance on her home shores in two years.

To be sure, the prodigal dancer’s return was noteworthy if only by its venue. In 2007, Blaize was proclaimed Reigning Queen of Burlesque, a title held in the highest regard by the global ecdysiast community. Fast forward six years and Blaize’s comeback is Icon!, an event held in Brighton’s Emporium, an ex-Methodist meeting hall with a cosy atmosphere which has been converted early this year into an entertainment venue.

The British star is renowned for her outsize props like her enormous rocking horse or giant telephone. Neither of those make an appearance on the bare wooden stage with the action centred instead around a small chaise longue. Dorothy, we’re not in Vegas anymore.

We’re not sure the audience care. Within the hall, they are dressed for the occasion with many sporting vintage frocks and suits. The atmosphere is warm and relaxed and the bubbly wine is flowing on the tables.

Icon is hosted by plus-size diva Dolly Rocket, a veteran of the Brighton cabaret scene with a bold singing voice. Backed by the Icon band (Nicky Mitchell, Tom Phelan and Tristan Banks), she ably sets the evening’s tone with mid-twentieth century standards like Fever. Her compering duties allow her to show off her ebullient and earthy personality.

Supporting Blaize are two other very different performers. The Australian soprano Miranda Keys may lack the dancer’s litheness but she comes with her own double whammy of heart-rending arias and hilarious asides. In the same year that the headliner carried all before her at the Burlesque Hall of Fame, Keys made it to the finals of the BBC Cardiff Singer of the World and her consummate vocal skill is shown by the range of operatic numbers Keys performs: Broadway classics West Side Story’s America and Porgy and Bess’ Summertime are sung with the same emotional finesse as arias from Puccini and Catalani.

Keys’ between-song banter is highly witty and adds insight into her world. When not taking potshots at tenors, Silvio Berlusconi and Katherine Jenkins, the antipodean brilliantly details the often absurd background to her choice of material thereby adding context and colour to her expressive and nuanced singing. Her patter and her timing would put many stand-up comedians to shame. The true testament to her performance comes at the end of her final aria when, as one, the crowd rose to give her a well-deserved standing ovation.

The final member of the evening’s impressive all-female cast is no slouch herself. Hula-hooper Chi Chi Revolver is a Guinness World Record holder who is circus from tip to toe. Her short but dazzling sets see her take on challenges of ever-increasing difficulty with aplomb and charm. A cheeky demeanour and an explosive mix of acrobatics and sexiness add up to an incandescent and energetic virtuoso display.

And here is she, Immodesty Blaize. She handily scales down two numbers from her expansive repertoire for this smaller space yet the adaptations do not take away from her innate stage presence. She has a luminous presence dressed in luxurious lace and fur costumes, embroidered sparkling corsets and matching merkin and pasties. She is pure escapism and has many in the mostly-female audience mesmerised.

Although shorn of her (in)famous props and army of backing showgirls, she is still able to create an otherworldly dream using choreography and her body form against the plain surroundings. She shows burlesque is a magical world where the artist is empowered and her charismatic choreography attempts to breaks the fourth wall between the audience and the artist, between reality and fantasy and between past and present. Ultimately, the lack of OTT paraphernalia focuses the attention onto Blaize herself; the only work of art here is the artist herself. If this was what she attempting to portray, she certainly has succeeded.