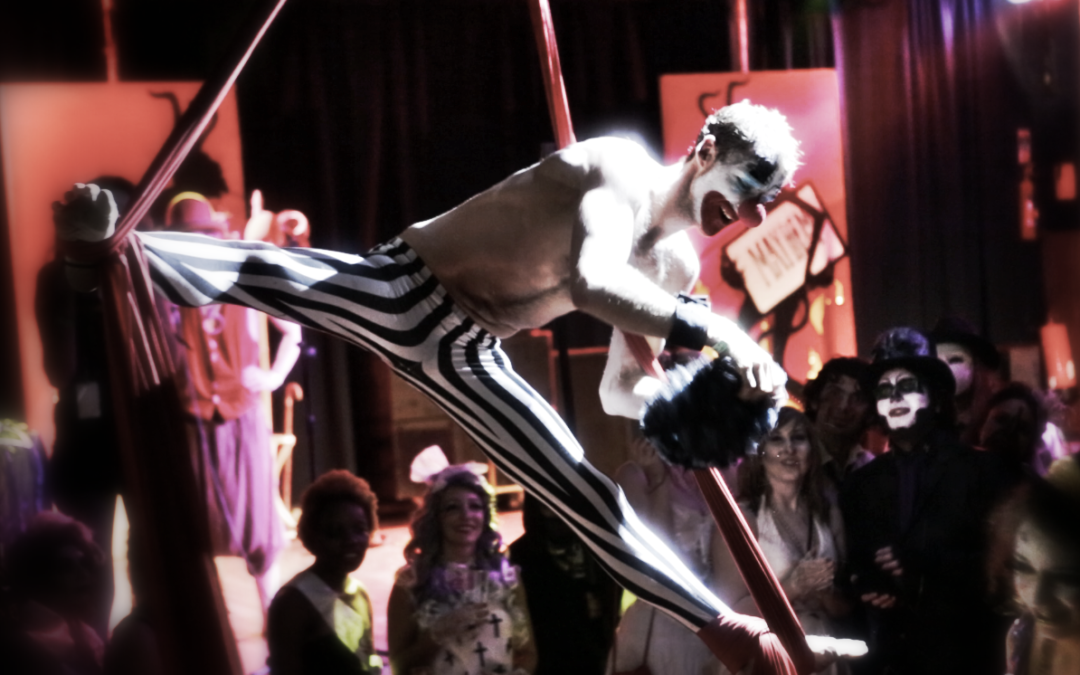 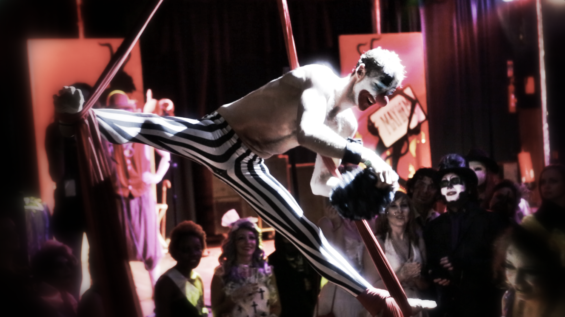 This year’s White Mischief Halloween Ball was themed around “Births, Deaths and Marriages”

For a number of years, White Mischief has transformed Kings Cross’ The Scala into a macabre night-time playground, with four rooms of All Hallows-related mayhem, magic and music. This year, the theme is “Births, Marriages and Deaths, and the venue is (as usual) packed with a creatively costumed crowd.

The Mischief events have never sold us short on quality variety entertainment but the latest line-up is something special. Compere and cabaret god Desmond O’Connor is dressed to impress in circus ringmaster white tails and sparkling KISS-style face paint.  As well as introducing acts, he keeps the atmosphere pumping with his own set including a collection of his naughty but nice ditties and a ukulele sing-along session.

Flamboyant burlesquer Lolo Brow raises many an eyebrow with her lizard-faced comedic set setting the scene uperbly for what was to follow. Another highlight is a fast and frenetic flamenco-style tap routine from Josephine Shaker, resplendent in bullfighter cape and a costume with the legend “SHAKER” written in flashing lights across her booty-shaking behind.

Headlining act Perhaps Contraption are a brass marching band for the 21st Century; a very tight ensemble of accomplished players, performing experimental jazz and ska-influenced pop music, with more than a hint of the avant garde. Extreme close-up vocal harmonies and many dissonances, clucking chicken effects, extended vocal techniques and 5 beats to the bar time signatures create a disorientating soundscape. There are also gypsy and folk-inspired elements, with an improvised Irish tin whistle solo backed by an oom-cha tuba bassline.

The band are joined onstage by a very special guest, the singer, writer and musician Amanda Palmer (seen here telling the Daily Mail where to go),  an inspired collaboration that follows their chance meeting at Glastonbury. Palmer’s punk cabaret performance style fits perfectly with Perhaps Contraption’s off-piste musical approach and the audience screams their appreciation. Palmer sings with a powerful and fierce delivery as she spits the lyrics out, emphasizing her point by smacking her own cheek in rhythm. She sings and plays her seminal hymn, Ukulele Anthem, an uplifting protest song with its invocation to banish the world’s evil through uke-playing. The band joins in as the song continues, leading to a false start finale when the chord changes they should play aren’t clear. Palmer then forgets her lyrics four or five times, but the audience are very forgiving – it’s the early hours of the morning, everyone’s had a drink and Palmer’s just too awesome for any of that to matter.

Electric sideshow act Voltini and Electra bring new meaning to the phrase “light up the stage” with their particular brand of fire-eating and tesla coil trickery. Rubber-clad hotty Miss Electra demonstrates her amazing electro-breasts that spark fire, before toasting a piece of bread with this very unusual method. The Temptress of Toast then helps Voltini execute his grand finale – a fire-spitting electrode between his naked butt cheeks.

Aerialist Lauren Taylor performs a beautiful cerceau act over the heads of the audience, within arm’s reach. She portrays a baby in utero, its umbilical cord pulsing in time with the steady heartbeat booming out of the sound system. Taylor’s graceful and balletic athleticism makes for a peaceful and profound performance.

Away from the main stage, there is plenty to see and do. White Mischief’s events always attract serious Fancy Dressers. Around us, Dickens’ elderly and eternally jilted bride Miss Havisham mingles with corpse brides, zombie grooms, vampire foetuses bursting forth from ghoulish “pregnant” bellies and a cobweb-covered orthodox rabbi.

The venue is replete with hidden treats. There are pop-up performances in the stairwells from ghostly storytellers, face-painters on the dance floor and a chapel of love offering shotgun weddings, as well as the chance to have your very own Death Portrait to take home as a souvenir.

Another exciting, original and hugely entertaining event from White Mischief, made even greater by the eagerness and enthusiasm of the dedicated Mischief Makers who attend.