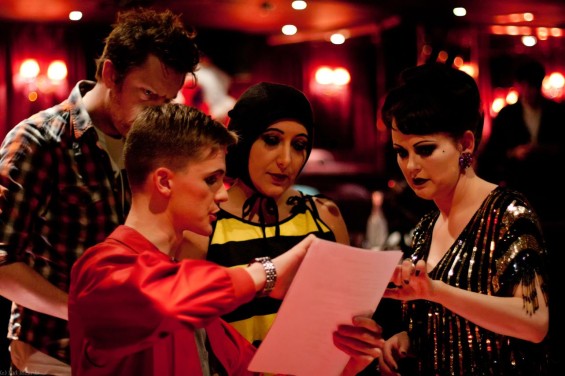 Written by Mannish. the Cabarevolution video brought together many of the stars of the London Cabaret Festival.

Somewhere in a galaxy far, far away, a slip of a girl stands on a balcony and ponders aloud. “What’s in a name? that which we call a rose/By any other name would smell as sweet.” Wise words and no mistake but when the nomenclature in question revolves around “cabaret”, many performers take umbrage over its use and, more accurately, its abuse. The current crop of variety entertainers are not the kind to take this sort of thing lying down; shimmying seductively or hanging from silks maybe, but not lying down.

Last October, a crack squad of cabaratti gathered before a video camera to decry the way that X Factor judges had labelled various acts as “too cabaret”. The result was Cabariot, a defiant and cheeky shot across the bows which even Gary Barlow saw the funny side of.

Scroll forward twelve months and there’s a different kind of trouble at t’mill. When the London Festival Of Cabaret (LFOC) launched itself earlier this year, this celebration of the American and British songbook was widely seen as a blunt snub (albeit unintentionally) to and by the wider London cabaret scene. Before long, the angry performers turned pitchforks into ploughshares and created the London Cabaret Festival (LCF) which is currently running until the end of October.

Both festivals have plans to return next May but, before then, the LCF put together a new Les Miserables-inspired video. Written by Hansel Amadeus Mannish (one half of Frisky & Mannish), it touches upon the core issues which led to the LCF’s creation as well as providing ample examples of the breadth of cabaret talent being ignored by LFOC.