The Week in Cabaret: Beauties and Beasts 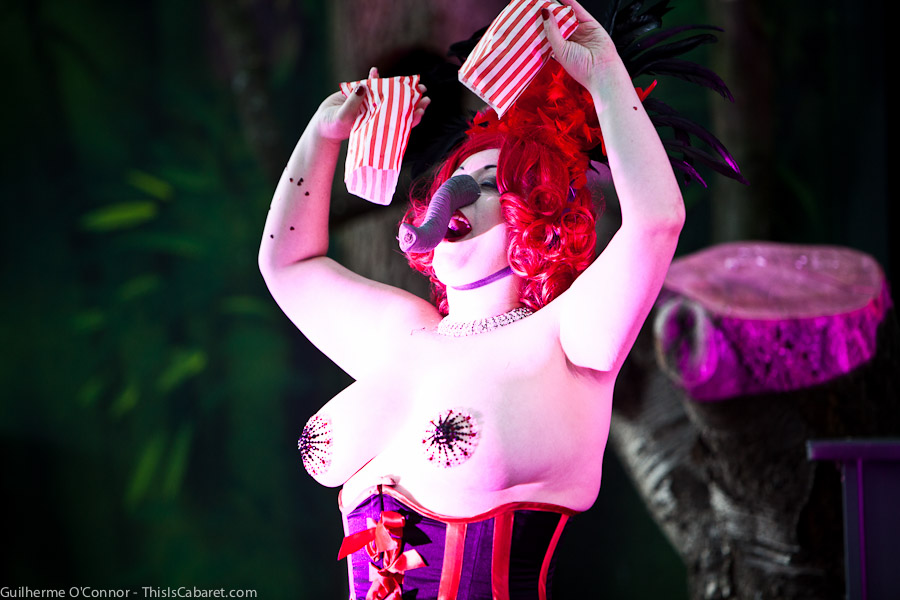 The most amusing creatures at the London Zoo are not in the pens on Friday nights. Curated and hosted by Des O’Connor, the latest edition of Zoo Lates fed a menagerie of vaudevillians to an voracious crowd. Mr. O’Connor’s performing beasts included contortionist Lisa Lottie, juggling tap-dancer Stewart Pemberton and acclaimed fire-breather Preacher Muad’dib, as well as burlesque dancer Miss Rose Thorne (The Double R Club). Summertime’s extended hours of sunlight can be distracting for variety, but the pristine line-up makes up for it: Zoo Lates is a roaring good time, with an often overlooked British treasure for a venue. Tickets for this summer’s season have sold out, but if you manage to get in, please do not feed the cabaret performers.

Even better than the real thing: Miss Rose Thorne performs her Elephant Woman burlesque act at the London Zoo

Few London clubs are swankier than the Hurlingham Club: Princess Diana was a member and there is currently an eight-year waiting list for membership. However, it was wide open on Friday for patrons of The Commandments of Bacchus, the first night-time event by the cabaret brunch purveyors at Bacanal. A fierce variety bill complemented the laidback soirée. Eye-catching glowing hoops made lithe Italian artist Silvia Pavone‘s Gynoid act a dazzling affair. Turning up the temperature, the faux-lesbian antics of burlesque duo The Sweet Harlots featured plenty of melted wax in a graphic display that was more Venus than Bacchus (not that we’re complaining, though).

Thursday’s engagement of When Worlds Collide wrapped up the show’s initial run on a high note. In addition to compelling turns by guests Marnie Scarlet and Mat Ricardo, the pleasure pavillion at the Vibe Bar saw three new acts by resident chorus line The London Chinatown Dolls. In one, the dancers desert the revue to go have a good time  at the beach, leading to hilarious tongue-in-cheek synchronised swimming. Later, a pair of storytelling sketches introduced by Miss Rose Thorne (in shamelesly deadpan pirate mode) culminate in a tavern bloodbath where a cast of twelve drunken lowlifes kill each other after singing Friggin’ in the Riggin’ by the Sex Pistols.

The show finishes its first season firmly established as a boundary pusher par excellence: every new date features new dramatic skits by the large cast, with increasing degrees of theatrical complexity. Further dates after their summer break are yet to be announced. Until then, London will have to make do without a groundbreaking vaudevillian funfest that shakes the foundations of variety. 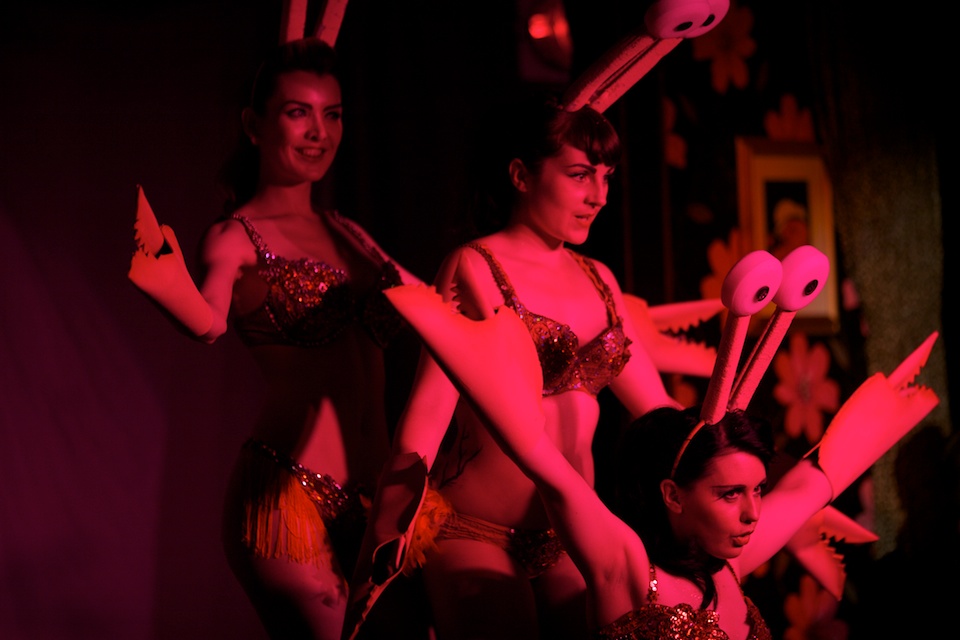 Deep-sea beauties: the London Chinatown Dolls perform new numbers at every date of When Worlds Collide

On Sunday, chap-hop champion Mr B the Gentleman Rhymer entertained the tweed-clad masses at the annual celebration of vintage panache and skullduggery that is the Chap Olympiad in Bedford Square Gardens. Competitors of both genders engaged in umbrella jousting on bicycles and shouting at foreigners. Sponsored by The Chap magazine, the two-day event entered its sixth year smashing the competition: it’s more fun than the Olympic Games, and a lot less hassle to attend, too.

After a brief Facebook campaign that mobilised fans to pillory a bad review from the Guardian, Penny Arcade celebrated more than London’s warm reception to spoken word show Bitch! Dyke! Fag! Whore! on Sunday, when the artist turned 62. A performance by special guest David Hoyle (in many ways Arcade’s British equivalent) was an added bonus, as was the large birthday cake presented to her by producer Jeremy Goldstein, promptly shared with the audience. This Is Cabaret wishes Ms. Arcade many happy returns.