The Boy From Oz : Trevor Ashley’s Liza (On An E) 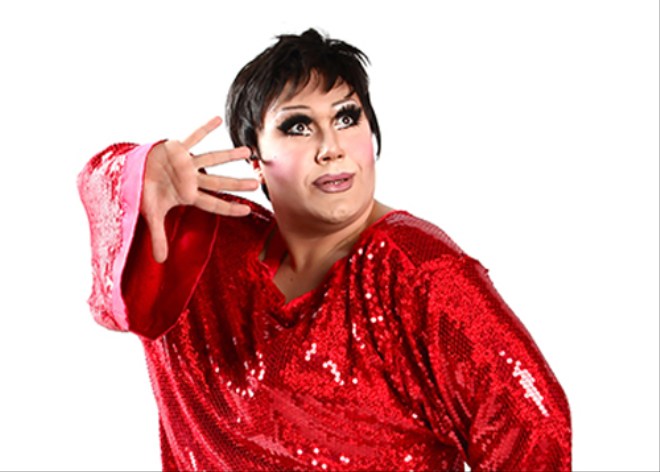 It’s an old joke to suggest drag queens are “big down under” but Trevor Ashley’s production credits suggest he’s packin’ antipodean theatrical heat.   In his native Australia, he played 600 performances as the curtain-raising Miss Understanding in Priscilla Queen of the Desert, and a year as Edna Turnblad in Hairspray. His one-man fourteen-diva cabaret show I’m Every Woman runs the gamut from Bassey to Gaga but includes more challenging impersonations such as Bonnie Tyler and a crack-smoking Whitney Houston.

For 2013, he has chosen to focus on the most gargantuan of stars, and gayest of icons, Ms Liza Minnelli, a woman who has become almost a parody of her own self and delights in gently mocking her detractors and impersonators by being even more outrageously camp than they.

You have to hand it to Speckulation Entertainment who are presenting Ashley in his London run, they are not shy of a project: if they fill the Vaudeville for five shows, more people will have seen Ashley do Liza in May than saw Liza do Liza at the Festival Hall in March.

On first appearance, Ashley seems a little topheavy, and his high painted cheekbones have an almost Asiatic cast which could suggest Imelda Marcos is covering Minnelli this week, until he speaks and then he’s unmistakably Liza with her hoarse vowels and a laugh like a squeaky toy punctuating rambling anecdotes which richochet between plucky old broad and wistful ingénue.

The long set, and the seven-piece band directed splendidly by George Dyer (MD of the Landor’s magnificent Ragtime), give him freedom to explore the wide range of Minelli’s repertoire.  Some of it feels experimental, like Liza covering Lady Gaga’s Poker Face, or a tribute to the lady’s indomitable spirit in Some People from Gypsy which had tuning issues, but the set pieces like Cabaret have all the energy and mannerisms the fans expect. New York, New York was outstanding, but the surprise hit was a pinsharp-accurate Ring Them Bells from the album Liza With a “Z” which took me right back to my 1972 bedroom when I used to mime it with a hairbrush.

A quota of the songs have lyrics adjusted by Ashley and his co-writer Dean Bryant to reflect Minnelli’s alleged penchant for marrying gay men, or with references to drugs, drink and hip replacements: familiar targets, maybe, but done with affection and wit and the audience roared in happy recognition.  In the toilets in the interval, several cubicles were reprising his sharply satirical “David Gest” number to the tune of Disney’s Be My Guest from Beauty and the Beast.

Most of the songs are comic or up tempo, but a surprising moment of stillness in Charles Aznavour’s What Makes A Man A Man showed how sensitive an interpreter of emotionally-freighted ballads Ashley can be, and hinted what a tremendous Albin he might make in La Cage Aux Folles.