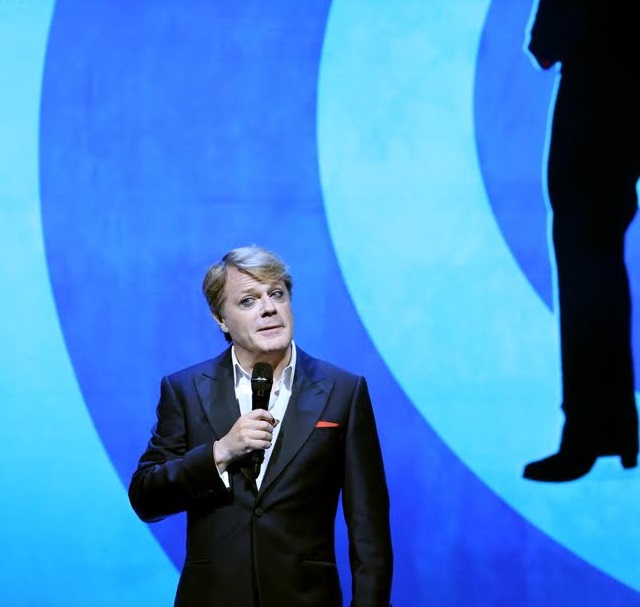 Self-described “action transvestite” Eddie Izzard has come a long way from his early days of performing on the cobbles of Covent Garden and his first gig at Balham’s Banana Cabaret. Three decades on, he has returned to the West End with Force Majeure: Reloaded, an update on his 2013 show. Why should you see it?

This is vintage Eddie Izzard

He may be past his hey day but this is still the Eddie we know and love. He struts the Palace Theatre stage in a single-breasted grey suit and Cuban heels, flicking his painted fingernails and flashing his mascara’d eyes hither and, on occasion, thither. He has kept his whimsical and rambling style intact and watching him riff from one idea to the next is, as ever, a sublime experience.

Force Majeure: Reloaded is both erudite and witty

From pontifications on human sacrifice to a climactic canteen fight and from seventeenth century Britain to the heights of Mount Olympus, the show manages to be both an edifying and entertaining package. While the British stand-up scene has largely devolved to the level of barely witty observational shtick and recycled puns, Izzard still flies the flag for a more intelligent brand of comedy.

After accusations that he was plagiarising his own past work, Izzard went out of his way to create new routines for Force Majeure. He toured it for two years and, over that time, he has refined it into a sharper work. There is still some headscratching and frustrating pauses as both Izzard and the audience are left to wonder where this show is going next but that is all part and parcel of seeing this maestro live.

This is the most intimate and extensive Izzard show in years

Force Majeure only appeared in London for four nights and then in a pair of immense venues (Wembley Arena and the O2 Arena, since you ask). Force Majeure: Reloaded plays to a relatively miniscule capacity crowd of 1,400 for five weeks – the longest West End run since Izzard performed Stripped way back in 2008.

The characterisations are as inspired as ever

As Izzard fans will know, the journey he takes us on is only half the fun: much of the hilarity ensues from the characters he brings to life along the way. God is back (this time sounding nothing like James Mason) and he (or is it a she?) is joined by, amongst others, Darth Vader, Julius Caesar, Martin Luther, a mechanical chicken, a Liam Neeson-voiced Zeus, a Welsh/Indian taxi driver and half the cast of the Lord of the Rings trilogy.

This may be your last chance to see Eddie perform live

After some 30 years of being a stand-up comedian, Izzard is making clear signs that he wants to go into politics. In 2013, he declared that he would stand for London mayor in 2020 and has received the backing of ex-Labour leader Ed Miliband. Given that he would need to start campaigning one to two years before the actual election, that realistically means that there is at most one more outing left before Izzard exits showbiz stage left.

He has mooted following up his current show with a possible update to his award-winning (and far better) Dressed To Kill but, if you wanted to see Izzard do his thing one last time, grab your chance now. He may not be the comic force he was a generation ago but there are few in the modern scene who can hold a candle to him.

Force Majeure: Reloaded continues at the Palace Theatre until 13 February. More information can be found on Eddie Izzard’s website.