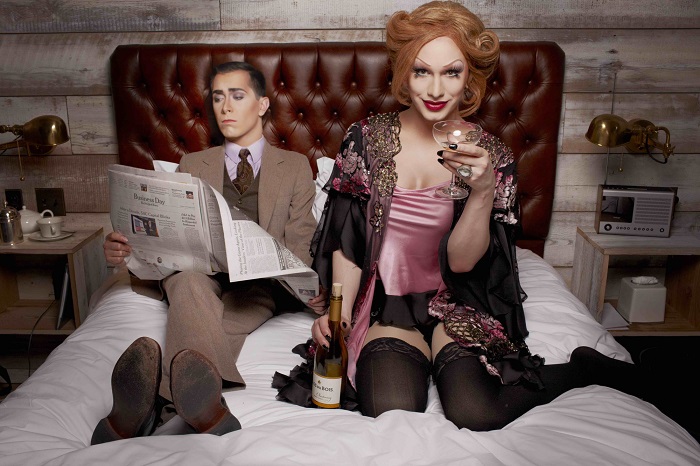 Jinkx Monsoon rose to fame in 2013 as the Broadway-loving, narcoleptic season 5 winner of Ru Paul’s Drag Race. She made her mark with her stellar impersonation of Grey Gardens’ Little Edie, and since then has had star turns stateside in Hedwig and the Angry Inch, the Seattle Men’s Chorus production of Hairspray and most recently, the hit comedy series Capitol Hill.

Perhaps at the outset it’s best to declare a vested interest, so here it goes: Jinkx Monsoon is my Spirit Queen. Probably. It’s a hotly-debated topic in my house – that is, it’s a yes from me and a no from my flatmate (hers is Jinkx’s fellow RPDR contestant Bianca Del Rio) who won’t quite accept it. But I’m all here for Jinkx, and a character-driven vaudeville pastiche is everything I want from a drag show, which is exactly what’s on offer here in the UK premiere of The Vaudevillians.

Jinkx and co-star Major Scales play Kitty Witless and Dr Dan Von Dandy respectively, a 1920s vaudeville couple who were frozen in an avalanche and have been recently defrosted only to discover that their songs had been stolen by modern day pop rapscallions. Before Britney Spears donned her air hostess uniform, Toxic was an ode to their dear friend Marie Curie. They wrote I Will Survive for their ill-fated Ibsen sequel, A Doll’s House 2. So now they’re back to claim what’s theirs.

Maybe I expect too much from my Spirit Queen, but I’m a little disappointed. This joke has been done many times before, and with more musicality, by Frisky and Mannish, Mr B the Gentleman Rhymer et al. Here the songs all lose something in their vaudeville transitions. While Jinkx undoubtedly has charisma, uniqueness, nerve and talent, Major Scales is more a support act than a co-star, and the energy drops when he takes centre stage. They quip, but don’t develop: I want to know more about these characters. I want narrative. I want Broadway, baby.

But let’s not be too shady, because The Vaudevillians has moments of brilliance. Jinkx knows how to work a crowd and the audience participation segments in particular are executed with flair and unexpected flexibility. She can sing, she gives great face, and the room is with her. Everybody here is having fun. The best thing about an obvious joke is that everyone gets it – and we do, and we laugh. That’s entertainment.