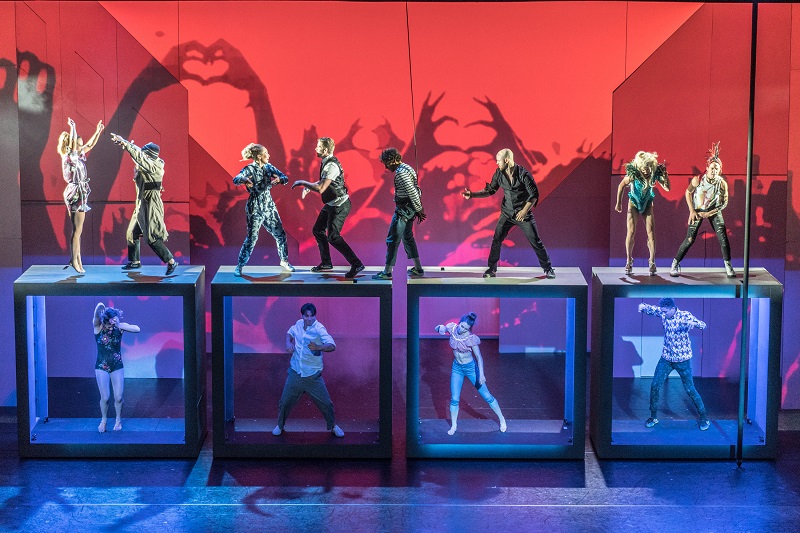 Oh, Soho. The land of drag queens, drug fiends and sex shops comes under the microscope in this new circus extravaganza at the Peacock Theatre.

SOHO is the brainchild of Stufish, arena production designers for A-listers Lady Gaga and Madonna so they know how to put on a show. In terms of production values, it is unlikely that any circus show in London this summer will look quite this good.

Soho Estates managing director John James was asked a while back whether the proposals by his company were part of a general gentrification of the area; he denied it firmly and instead suggested that Soho was undergoing “dynamic change”. That may be sophistry of the highest order but it is something that defines Stufish’s approach when ripping open and examining this kooky and kinky corner of the capital.

Soho is a unique part of London and, arguably, the world. When its famous plumber-cum-playwright Laurence Lynch was asked how to describe the place, he used the words “tolerant, tight-knit, entertaining, premenstrual and nocturnal” and SOHO demonstrates many of these aspects.

The action takes part over a 24 hour period and covers the zone from soup to nuts in different eras. We wander through Soho Square, around Chinatown, grab a coffee at Bar Italia, pop into Madame Jojo’s and head down Old Compton Street. We are taken inside a gym and a cafe before a trippy scene inside the infamous drinking den that was The Colony Room recreated here in all its green-walled horror. This is as thorough an exploration of London’s red light district as anyone could want.

But what about the human geography? Soho is nothing without the personalities which people it. Step forward a crew of talented acrobats who thrillingly portray the various characters typical to the area, not least hipsters, hippies, drag artistes, office drones, barristas, tourists and construction workers.

Daniel Ash is short on stature, long on talent and a joy to watch throughout whether in character or skilfully using aerial silks . He won the Best Performer prize at this year’s Sexual Freedom Awards and, for SOHO, he has a number of roles including the kind of local dandy epitomised by the late Sebastian Horsley and a truly fabulous drag queen. He will definitely be one to watch out for in the future.

Alessio Motta is our psychopomp through this underworld and, when not spinning on the Chinese pole, he is taking us on a tour and bumping into his equally talented international colleagues. Peter Freeman and Loric Fouchereau (from Australia and France respectively) provide some comedic hand-to-hand antics while the UK’s Antony Simpson-Tidy and Kayla Lomas-Kirton go beyond the standard big top antics to give us martial arts and hip hop dance respectively while the doubles trapeze from Canadians Xander Taylor & Mélanie Dupuis is a spectacular treat.

If anything, SOHO has a little too much of the place’s frenetic and neophilic nature for its own good. Some of the episodes make too little impression before they are moved along for the next one. At times, equipment like the Cyr wheel are flashily rolled out, used briefly and then never seen again. The pacing is generally excellent but there’s a lingering sensation of ten kilos of circus being forced into an eight kilo bag.

SOHO continues until 20 May. For more information, see the official Sadlers Wells website.