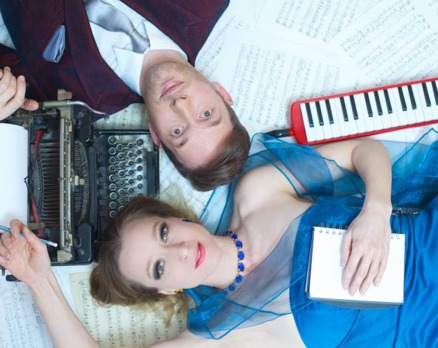 Michael Roulston & Sarah-Louise Young have collaborated for over nine years.

Sometimes, music defies mathematics. One and one sometimes makes more than two and recent collaborations between comic singer Sarah-Louise Young and maestro Michael Roulston are a prime example of this.

Individually, they have forged enviable careers. Roulston is the London cabaret scene’s premiere musical director and has worked with artists as diverse as alt-drag controversialist David Hoyle and the rather more equanimous Dusty Limits. In her international hit show Cabaret Whore, Young has sung and wisecracked into life many a hilariously observed character.

This isn’t their first joint effort; indeed, they’ve been writing together for around nine years. Their recent Julie Madly Deeply saw them explore not only Dame Andrews’ most famous songs but the ups and downs of her career. While that show was a closer fit to the songbook genre, Two-Faced is more of a musical revue being composed of original numbers all written by the pair.

The set list, comprising of 16 songs and a musical plug, has some bona fide charmers in there. There are plenty of nods to the golden era of music hall, not least in the jazzy Happy Here With You while some numbers like The Walk Of Shame mix old school melodies with contemporary lyrical themes. When Young isn’t belting out the chucklesome Sorry Mum, she’s channelling Dame Andrews on the splendidly heartfelt The Letter. Much Much Older shows off Young’s voice to glorious effect and Gift Shop is a real barnstormer.

In a room that is more used to renditions of popular standards, this gig was always going to be an awkward fit. Glorious as it is as a space, Crazy Coqs – which last month walked off with the best venue prize at the London Cabaret Awards – is more at home with songbook, an art form which veers between glorified karaoke and inspired interpretations which improve on the original recording. A table near the front are very engaged with the show but elsewhere there was a certain disconnection exemplified by one exchange: when Young prefaced her rendition of Status Update by asking one gentleman what he thought of the world’s most famous social network, he tartly responded, “I’ve heard of Facebook. I just don’t approve of it.”

As an album and as a show, though, Two-Faced falls short. It is a nervy performance at times. Despite Roulston being a weekly regular at the venue, he seems nervy on stage and struggles with some of the between-song banter; for her part, Young fluffs one verse and appears more relaxed as her Cabaret Whore-era alter ego Berni St Clair than in her own skin.

The album sets its stall out early doors as a wryly humorous and occasionally poignant look at life, sex and relationships and, to an extent, it succeeds. The song subjects, though, often rotate around the life of peripatetic performers, those creative souls whose careers and love lives are sometimes perpendicular considerations. On The Road With Roulston & Young would perhaps be a more accurate title for this latest collection.

More than a few of the songs come across as works in progress, bereft of a killer hook or line, and there’s a general lack of the gleefully sardonic edge seen on the last album Songs For Cynics. It’s no coincidence that the highest points of the night are Please Don’t Hand Me Your Baby from Cynics and Young’s turn as Berni on A Diva Of A Certain Age and Song Of Bernie. Two-Faced has its moments but is more a plateau than a peak for this fantastically talented duo.