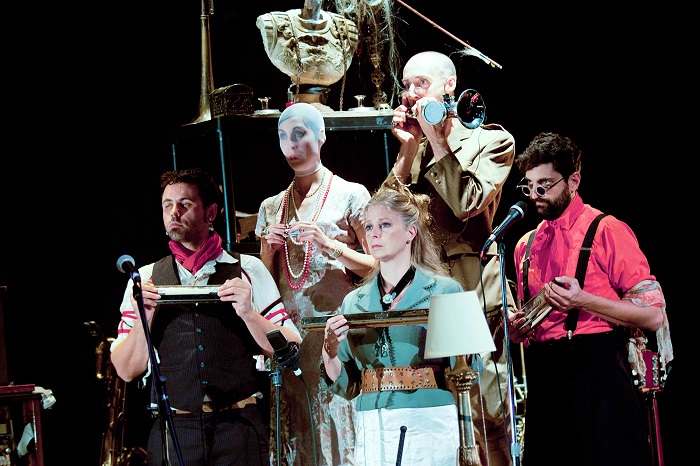 A truly creative, artful and emotional piece of music theatre. 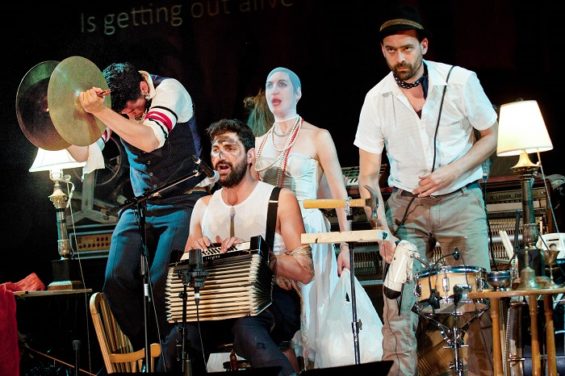 Quebec’s iconoclastic L’orchestre d’hommes-orchestres (LODHO) adapt the music of Kurt Weill for their return to Southbank Centre’s Purcell Room at Queen Elizabeth Hall, having received four-star reviews last year for their idiosyncratic take on the music of Tom Waits.

In Shattered Cabaret: The Songs of Kurt Weill, LODHO create a work at the crossroads of theatre, cabaret, visual arts and performance. In a high-society salon modelled on that of the early 20th century, eight musicians sing about the best and worst of the human condition.

From Berlin cabaret and Parisian nostalgia to New York’s Broadway, LODHO retrace the path of this musician in exile, using rare instruments and ‘music-objects’ that conjure up Weill’s dramatic musical world. Superimposed over the music are fanciful and surrealist images concocted by the group to create surprising tableaux vivants.

As the audience file in to the Queen Elizabeth Hall’s Purcell Room, the group are already onstage, dressed in vintage garb, lounging, gazing thoughtfully or pacing about amongst the cluttered curiosities and strange created instruments. Dusty lamps, broken ornaments, gramophones and baby’s prams are piled up next to rickety shelves overflowing with antique objects.

The group announces that they will “begin with their final song,” Speak Low. The multi-instrumental singer-musician ensemble creates interesting musical effects; a female singer delivers her vocals into the receiver of a working vintage telephone, with percussive accompaniment from a man sweeping the floor in rhythm – both telephone and broom are discreetly amplified to add to the sound world.

Creative use of theatrical staging and unusual instruments delight and surprise the audience in equal measure: a woman sings, writhing in ecstasy, as a man dressed as a soldier grabs her, pulls her close and appears to passionately kiss her throat whilst playing a harmonica attached to the woman’s necklace.

The clacking keys of a typewriter mounted on top of a doll’s pram is pressed from above by mini puppet string stilts to provide a percussion ostinato, while another musician plays slide guitar with one hand and slams down an amplified telephone handset on the beat with the other. A food mixer is used to play a snare drum.

A Bontempi organ sits on top of an ancient and crumbling upright piano without its casing, and a DJ wearing headphones and a cravat plays a backing beat on an 80s drum sequencing machine. Musicians play piano glissandos with their buttocks, singers sing entire songs with stockings over their faces and a male performer sings whilst stuffing long  beaded necklaces into his mouth, still managing excellent German diction.

A heavily pregnant singer clad in stockings and suspenders slurs her words and chain smokes, as she performs a wonderfully lazy and barely recognisable New Orleans jazz-style rendition of Weill’s famous song Mack The Knife. The same singer provides many of the surreal comedy moments of the show; singing whilst standing on a wobbling vibro- platform operated by a foot pedal sewing machine, achieving a reedy and shaky vocal effect, the fronds of her fringed flapper dress quivering in time.

Another comedy moment comes when a male singer, topless with his arms tied above his head, attempts to sing whilst his underarms and waist are torturously tickled from behind by other performers.

The emotional intensity of the performances are authentic from every person onstage, even though the text is not always conveyed, whether through language barriers (they sing mostly in French or German) or through occasional slips in diction. This multi talented ensemble have a wonderful energy, consummate musicanship and sense of the theatrical, engaging the audience throughout – there is a sense of disappointment when the word “intermission” flashes above the stage, as though the audience don’t want to leave this strange and fascinating world.

The performance includes a slideshow of images and text to compliment or to question the  action onstage, and perfectly executed lighting is used very effectively throughout: performers touch a lamp to cue whole stage lighting effects, focus is drawn to different areas of the stage, or to create interesting shadows from the curiosity shop of junk items littering the background. A bizarre chandelier is lowered towards the stage, made up of what appear to be individually lit transparent descant recorders with turkey baster bulbs attached, a squeeze of which makes the recorders peep.

The finale is a macabre but strangely beautiful rendition of The Ballad of The Drowned Girl (from Berlin Requiem). An English translation of the German lyrics is projected above as the pregnant woman sits and sings, topless, her breasts covered by the small celtic harp that she clutches in front of her as though it’s the last breath of life she is clinging to. She utilises a challenging extended vocal technique for much of the song by singing on an inhaled breath instead of an exhaled one, meaning that between each line she needs to make a prolonged exhale into the microphone.

This technique conveys the character of the song and its story with a grim and eerie realness, as the text describes the girl’s slow descent into death. A lamp connected to the microphone brightens with every exhale, and then dims again, finally dimming to a black out leaving us artfully disconnected from this truly creative, artful and emotional piece of music theatre.