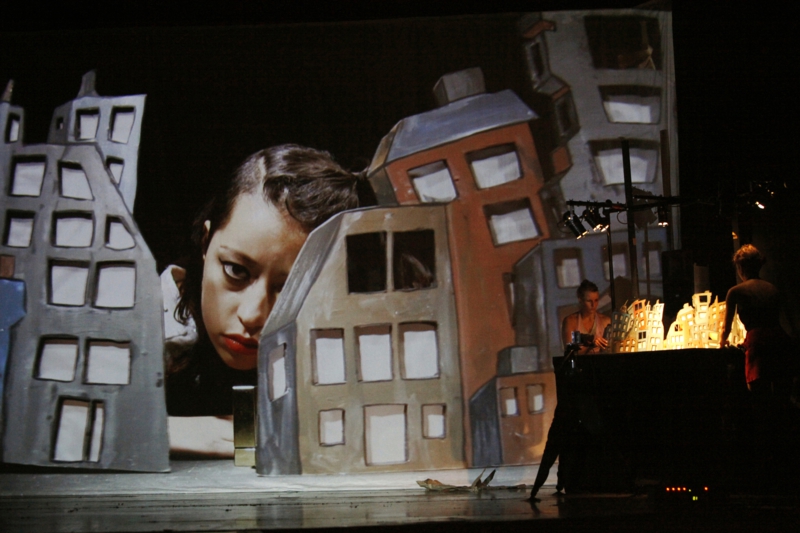 Sebastian Toma has fused circus and theatre for his latest production Little Big World. Featuring London-based contortionist Leilani Franco (aka Lucky Franco) among a diverse and talented cast, the show has only played in Germany and Austria thus far. No matter: TIC special correspondent Gabi Keast was front and centre to bring us her thoughts on this fascinating show. 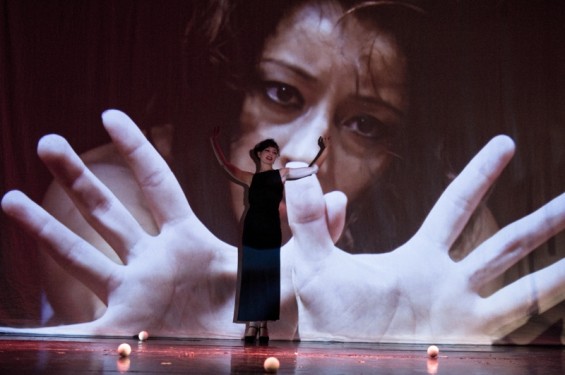 Having worked with anarchic musicians The Tiger Lillies and on circus shows The Time Between and Balagan, director Sebastiano Toma has already provided ample proof that – when presented in a new guise on the theatrical stage, beyond the confines of traditional circus – physical arts can reach and inspire a wide audience. In his shows the three distinct elements of music, physical arts and stage design carry equal importance, interacting with each other to form a harmonious whole.

For Little Big World, the stage set is not just a static backdrop but very much a part of the action. On a table next to the main stage is a microcosmic “side-stage” where the performers continually change a miniature version of the set. Their actions are videoed and projected onto a neutral backdrop for the audience to see, often while performers are on the main stage.

The audience can see what’s happening on the table, and yet they are still amazed at the effects created by the blow-up projection. Fantastic images appear, small objects suddenly create a whole new world. It’s like visiting a museum: you walk from picture to picture, losing yourself in observation, allowing your own imagination to roam. In one scene, we see a ship crossing the sea and putting ashore at a port city. As we walk through the city, new rows of buildings continually come into view. Mobile phones are placed in the windows of the houses, and the videos running on the screens of the phones allow us to see what is going on in the apartments. Curtain tassels being drawn through water are filmed with an upside-down camera to make them appear like sea anemones on the screen. Later, the same technique is used to make wine flow upwards into glasses.

Violinist Mark Cheat’s compositions, a fusion ranging from classical music to gypsy jazz with shades of world music, weave a consistent yet varied tapestry of sound throughout the show. Even if the six musicians had been performing alone, it would have been a wonderful concert, but the music, scenery and physical performance complement and support each other so marvellously that their interplay creates a whole new dimension. The performers bring the pictures to life, interact with them and move within them. 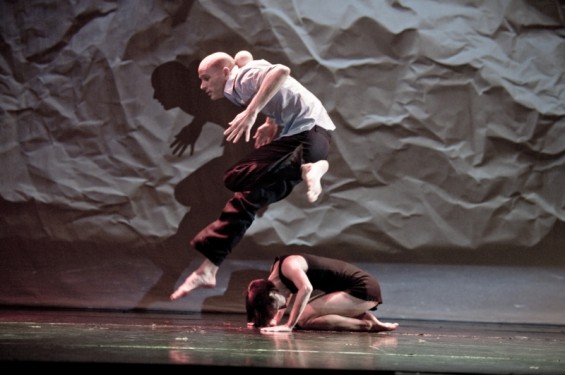 The associations created by the stage design and the music give meaning to the actions of the artists. They are no longer presenting an “act”, but rather are behaving in a perfectly natural way – for people living in a dream world like this. Stefan Sing’s solo juggling and his “pas-de-deux” with Cristiana Casadio rise to a new level of beauty in this setting. In her solo, Casadio dances to escape from giant scissors that are wildly chopping the air at the scenery table. In their hand-to-hand acrobalance, Philipp Thimm and Katrin Hauf glide serenely and harmoniously from one move to the next, as if there were no need for muscular effort.

We are quite willing to believe that Leilani Franco, the fantastic London-based contortionist, rarely moves in any other way than rolling backwards over her stomach, and that when she drinks coffee she always holds the cup in her toes and brings it to her lips over the back of her head. She presents all the elements of classical contortion, but not as poses on a pedestal; on the contrary, she explores the whole stage. Her eccentric, slightly bored character produces some exciting and some comical moments, both live and in the backdrop film.

In addition to their “acts”, the performers all participate in Sofia Spyratou-designed choreographies in which the live music or the singing of Momo Kohlschmidt are in the foreground. At the beginning, the show is still fast-paced and hectic, like a big city. But little by little, the images become calmer, more dreamlike, more fantastic. A high point is the “Sanddorn Balance” by Japanese artiste Miyoko Shida. She positions the dried twigs so slowly and with such concentration that time seems to stand still and the bustle of life outside the walls of the theatre is completely forgotten.

As they receive the final applause, all the members of the ensemble appear with suitcases, already on their way to the next venue, the next dream-world. They put down their suitcases, turn them around – and we see that they are now houses with brightly lit windows. Perhaps they are telling us: “even after you return home, the dream can continue.”

If Little Big World really were a natural medicine, that sentence might be included in the information leaflet as a recommendation for enhancing its therapeutic impact.

More information on this show can be found on Sebastian Toma’s website. Meanwhile, here is a tasty trailer of what to expect should the show come to London.