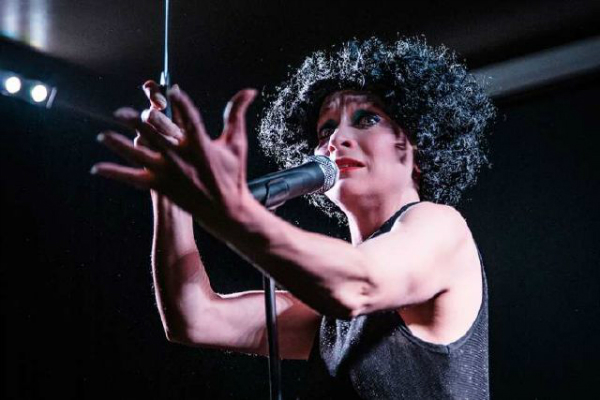 Sarah-Louise Young and Michael Roulston’s latest collaboration sees them give La Poule Plombée her first full show – and, still, the “frumpy pigeon” is as comically unhappy as ever. There’s no pleasing some people.

The French mistress of misery was first seen as a character in Young’s Cabaret Whore shows and here she tells stories of woe in a manner which is more likely to bring out tears of laughter than agony.

More Gallic than garlic chicken in a garlic sauce, she is now down on her luck and down to the last remaining member of her band (Roulston on keys and in character as her much-abused accompanist). Where does she go from here?

Over the course of the show, we learn how this particular pigeon came to be standing here, almost alone both on stage and in life. We hear her backstory, a litany of bad luck, bad men and being born in the shadow of “the little sparrow” Edith Piaf. The evocative lyrics of Some Men Don’t Translate, Love Is Everything and Baggage bring out the manifold reasons behind this captivating character’s situation.

To its credit, this show isn’t afraid to delve into the dark. Perfect Papa may sound like a sweet and fluffy song but it describes the kind of childhood trauma that would keep a therapist busy for years. It’s a bravura move from Young and Roulston to downshift the mood in this way and, to a large extent, it pays off.

And let’s talk about Roulston. He is one of the cabaret scene’s less well known contributors but he has had a hand in many of the highlights of recent years. You’ll not often see his name in lights but his addition to any act or show is rarely anything other than a very good thing. Take, for example, his work with Young in their Julie, Madly, Deeply, a brilliant show based around the life and works of Julie Andrews, and his work with Dusty Limits on the veteran singer and compere’s critically-acclaimed debut album Grin last year.

Roulston is not afraid to roll up his sleeves and join in the character comedy when required: as part of Meow Meow’s Feline Intimate, he plays the last few numbers in his underwear. Thankfully, La Poule Plombée, is kinder on the apparel front and hugely benefits from his chucklesome contributions as the “straight man” to the La Poule’s more deranged demeanour.

This is a different Poule than the one I first saw in 2010. There, the character was spikier and more immediate in presence with the songs packed with razor-sharp lyrics. Here’s an example of what she sounded like:

Scroll forward six years and Poule’s new incarnation is a different kind of animal. Sure, there are the recognisable outer trappings – the costume, the wig, the accent, the melancholy, the butcher’s knife – but now ol’ miseryguts is a more mature creation. The transition from her old self to her current state of being has seen her cross from character comedy to a style more akin to songbook cabaret, a genre that usually consists of cover versions and not original works.

The move is certainly a brave one and it is a shame that it is one that doesn’t quite work. As occasionally happens when crossing the road, La Poule Plombée, is hit by traffic from both directions. While Julie Madly Deeply (another songbook-style show) had classic numbers sewn into its very fabric, this show relies on songs which generally and tonally lack in variety. There’s no denying the craft in each of them but, taken as a whole, most of the songs on first hearing lack the individuality to stand out on their own.

On the other hand, what made the frumpy pigeon such a genuinely hilarious character the first time around has been spread thinly across the show. The between-song exposition is funny and the songs have their occasional laugh out loud moments but overall the numbers lend themselves more to wry smiles than writhing in the aisles. Perhaps it is down to the longer format, perhaps there is only so much that can be wrung from the concept. Whichever, the end effect leaves one satisfied but not ecstatic.