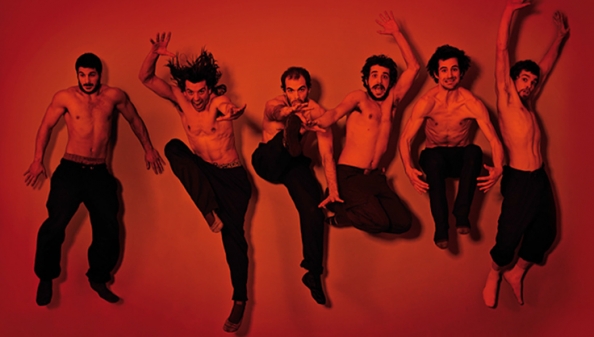 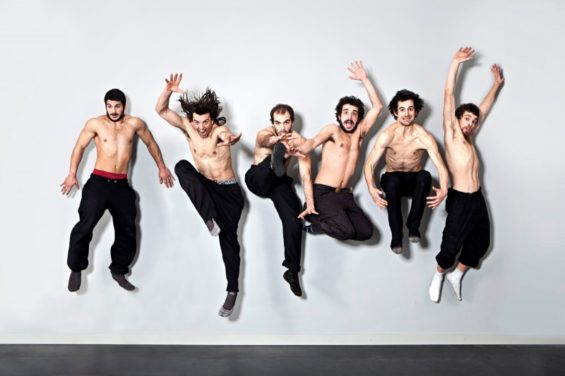 La Meute appear at the Roundhouse this month as part of Circusfest 2014.

Raising the curtain on Circusfest 2014 is La Meute,a six-man celebration of the Russian Swing. Dressed only in unsecured towels, this acrobatic French sextet risk more than life and limb on this outsize piece of circus equipment.

The eponymous troupe – whose name translates into English as “the wolfpack” are undeniably lively and entertaining and their jaunts on the swing a thrilling spectacle. The swing itself is a contraption more akin to a playground garden swing though with steel bars instead of ropes, and its swinging platform is able to rotate 360 degrees around the horizontal bar from which it is suspended. Two or more acrobats stand on the swing platform, pumping it back and forth until it is swinging in high arcs. And once it reaches a certain height, that’s when the ballistic beauty kicks in as acrobats are flung about ten metres into the air for heart-stopping moments of drama and somersaults. 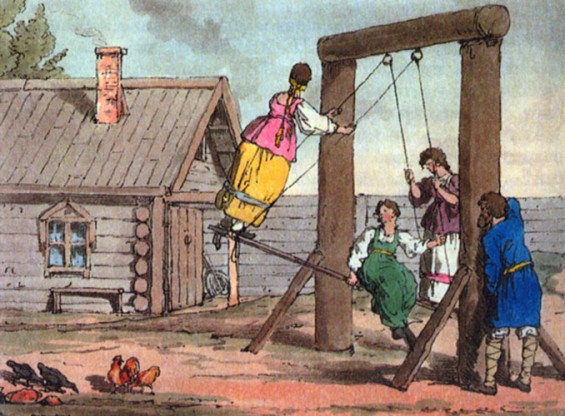 An early example of the Russian Swing

After a deliberately rickety start, the show steadily gathers pace through various acrobatic and dramatic forms – including human columns, somersaults, hand-to-hand, teeter-board as well as their pièce de résistance amidst a minimal set. Disparate household items such as a ladder, some planks, musical instruments, a washing line and the aforementioned towels are loosely tied into a narrative using subtle comedy, tragedy, song and faux-incompetence.

Before long, we are firmly placed in the palm of their hands as we go along with them for the whimsical, occasionally-bordering-on-slapstick, ride. La Meute makes simple but effective use of thematic device, bringing to life a number of scenic motifs while based around the common denominator of the towel. By connoting Roman slavery, an Indian yoga retreat, a Spanish taverna, the cast’s functional yet inventive use of the space and the props keeps us entertained. At times balletic, at times philosophical, this aspect of the show is energetically choreographed with confident acrobatics.

Athletic as these guys are, the well-honed, the collaborative nature of these set pieces rely on more than pure physical ability. Various cast members provide musical accompaniment, sometimes playing their instrument whilst in the middle of balancing act or upside down. There are also some fine comedic touches, even if they occasionally border a little too close to slapstick reminiscent of the silver screen antics of Charlie Chaplin and Laurel and Hardy: at points, the swing narrowly misses errant members to deliberate effect while one scene sees all six clamber aboard the single small bicycle . Amid this thoroughly modern yet minimal production, however, these chuckles don’t dilute the artistic credibility of La Meute. Instead, they rather add to its charm.

Circusfest as a whole is set out as a collation of contemporary examples of the artform, some of which are founded on re-inventing and refreshing circus traditions and tropes. This approach runs the risk of shows being more about style over substance, held together by desperately tenuous, over-styled storylines which take everything away from the action Although it continuously teeters dangerously on the edge of farce, La Meute handily escapes this fate by never veering too far from circus’ traditional spit-and-sawdust roots even as it injects contemporary stylings. This exciting and fun show is a promising start to CircusFest 2014.

Want to know more out of Circusfest 2014? Read our guide to all the events at the Roundhouse and other venues.