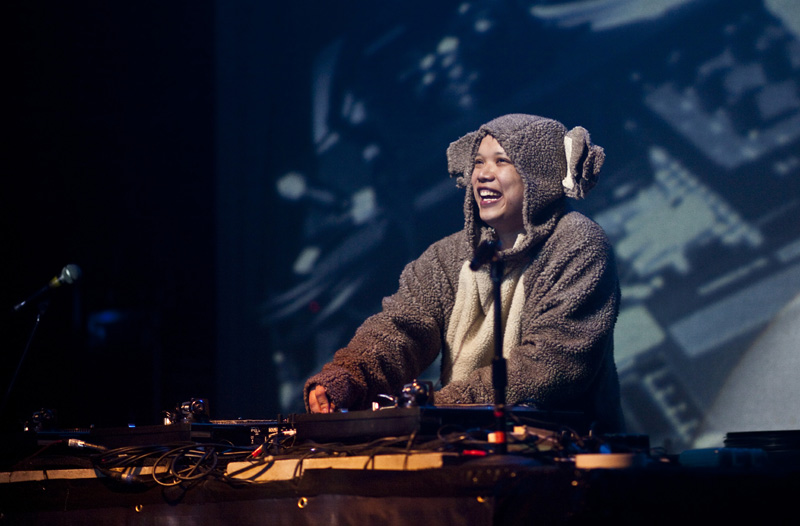 DJ sets tend to be stripped-down affairs: the jockeys, their gears and maybe some creative lighting. What if you added some comic bits to the party, though? To promote 12 Bit Blues, his latest album, Canadian DJ Kid Koala has assembled a veritable touring revue, with dance skits, puppets, props and plenty of audience participation. At The Vinyl Vaudeville Show, humour and electronic music merge into a cheerful parade of amusements.

Koala’s experimental tunes lend themselves easily to performance. Contrary to the stomping, high-BPM output of most DJs, his tracks take the form of slow shuffles built around melodic loops, guitar riffs and heavily manipulated vocal samples from the likes of J.B. Lenoir and John Lee Hooker. A trio of dancers struts to the bluesy set throughout the evening, launching into a showgirl routine, air hostess safety demonstrations and even a fan dance (no striptease, though: this is a family party). The same dancers operate puppets like a grey robot that lip-synchs to the atmospheric 6 Bit Blues and two rows of swaying backing vocalists, humming along with serene pouts.

The Kid himself puts on quite a show on his own. A bona fide turntablist, Koala creates much of his sound on the spot, tampering with the records via scratches, modulation and other tricks. For his take on Audrey Hepburn’s Moon River, the DJ plays different notes by moving the needle over a record in time, adding what’s essentially a live solo. Watching it all on two screens that show close-ups of his gear, fans go unsurprisingly wild. He talks a lot too, introducing songs, teasing the public and cracking up aloud at mishaps with a comfortable and unassuming stage presence. 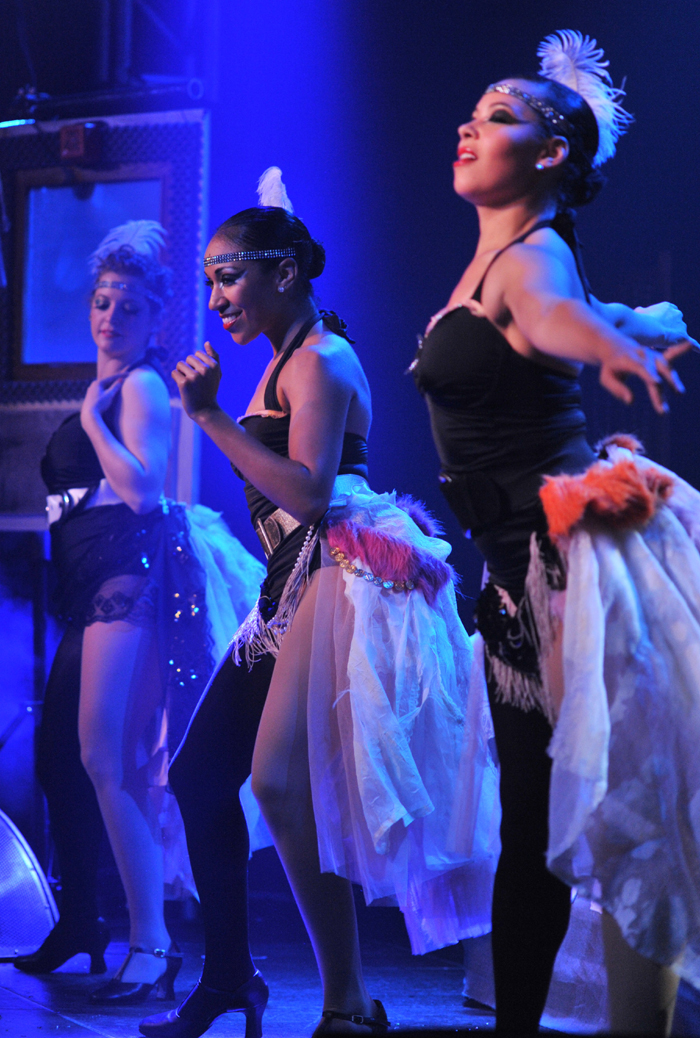 Which is not to say he stays behind his decks the whole time. Koala carries a portable sampler through the audience, playing it over his tracks from the stalls. Later, he gets the entire venue to sit down and shush for another gag. Even more interaction follows from the dancers, who orchestrate a limbo competition on the dance floor, throw kazoos at the crowd and check their skills with a microphone. At one point, they lead patrons in a conga line all the way from the stage to the back of the room, twice.

In The Vinyl Vaudeville Show, the trio answers to the name of “Incredible Dancing Machines”, but they’re actually Adira Amram and the Experience, a cabaret outfit from New York City. Joined by Jessi Colon and Maresa D’Amore-Morrison, Amram also plays the opening act slot, singing and dancing to backing tracks of her own songs. The over-the-top 80s synth pop of cuts like Fingerblast and Electric perfectly match their garish spandex costumes and exaggerate moves. Amram’s rowdy allure and prompt chemistry with the public get the house jumping along in no time. On their own, they’re a comic overdose of loud excess.

Innovative and fun, Kid Koala takes electronic music beyond the confines of its subculture. What he does with beats and samples belongs in niche basement parties filled with fellow DJs and connoisseurs, but his theatrical performance gives it an instantly relatable human touch and universal appeal. The Vinyl Vaudeville Show is a modern variety gem. You’ll find it a killer show from whatever angle you look at, whether you want to dance, laugh, sing along or just watch some crafty performance.

Franco Milazzo predicted The Vinyl Vaudeville Tour would be “a crazy cabaret cornucopia of a show”. He was right. Read his interview with Kid Koala on the vaudevillian inspiration for 12 Bit Blues.

Photo credits: Chris Barnby/VentPhoto.com (Adira Amram and the Experience); others courtesy of the producers