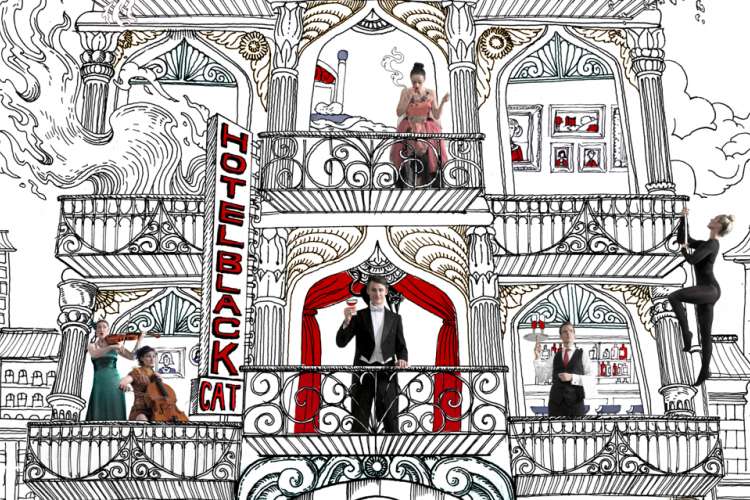 Short of a lunatic asylum or a prison, apparently the best place to meet an assortment of crazy characters is a hotel. From American Horror Story to The Grand Budapest Hotel to Crossroads, the accepted wisdom is that, if one sits in a lobby and waits long enough, every aspect of humanity will pass before your eyes in all their tawdry glory. Hotel Black Cat, the latest summer spectacular from the award-winning company Black Cat Cabaret, captures this sentiment perfectly.

While Lili La Scala brought “sensual psychopomp” hosting to last year’s production, it is up to Dusty Limits to lead the line this time as the felicitous faux-Fawlty of this imaginary joint. Populated by a menagerie of curious creatures, the hotel is in dire financial straits. The only salvation lies in the form of a rich gentleman who will be shortly arriving with his chequebook and his lovely wife. What could possibly go wrong?

Dusty Limits recently grabbed headlines on both sides of the Atlantic earlier this month after an ill-advised “rape joke” at the prestigious Burlesque Hall of Fame (something he later apologised for). This time around, he thankfully keeps to a script which is engaging without getting in the way of the action.

And what action! Featuring circus to burlesque to physical comedy to sideshow to music, this production is the epitome of variety. All this cabaret party needs is a glittery kitchen sink and it would be good to go.

Director Laura “Frisky” Corcoran has a bevy of talented folk at her disposal and she deploys them well. She doesn’t appear herself (in contrast to Between the Sheets, the other London Wonderground production she is directing) and she doesn’t need to: no less than fifteen performers take to the stage at one time or another.

About half of those performers are part of either dance trio Cabaret Rouge or musical quartet Bowjangles. More blanche than rouge for their skit here, the former portray cocaine-hoofing ballerinas while the latter back up Limits on his solo numbers as well as putting on a hilarious operatic battle which is whimsical and wild as all hell.

Nathan & Isis were one of last year’s memorable highlights for reasons both wonderful and painful and they return here for more two-handed acrobatics which are just frankly gob-smacking. The broad-shouldered fellow throws around his tiny partner with skill, strength and confidence and the pair never lose the deep connection they display through every twist and turn.

Equally astounding is Vicky Butterfly’s much-admired masterpiece When The Hard Rain Falls…The Night Flowers Bloom. It’s the burlesque act at the end of the universe, an intense and epochal example of an art form which is too often style over substance. The mesh of modern light technology and spell-binding dance is perfectly ensconced in the dark of Spiegeltent to create an unforgettable experience.

Added to the mix is the superb Chrisalys, one of the UK’s finest vaudevillians and circus performers. There are very few actors, never mind cabaret artistes, who can engender such a sense of character and intrigue from the get go. He is on stage only for a short while but, in that time, rolls out a literally brilliant amuse-bouche of an act combining theatre, horror and some retina-searing fire-breathing. Rounding out the cast are gentleman juggler Florian Brooks and clown Dimitri Hatton. While Brooks is as cool as a cucumber as he throws around glasses, a bottle and a tray, Hatton mines the other extreme with his uproarious slice of slapstick.

The much-lauded Limits has a mixed night on the whole. On the one hand, his rendition of The Eagles’ Hotel California is both fitting and fun as is the arrangement of Be Our Guest from Beauty And The Beast. On the other, his toothless and banal lounge version of Guns ‘n’ Roses’ Welcome To The Jungle stinks the place out; if you ever wondered what the aural equivalent of some poor hedgehog walking around without spines sounded like, this is it. Even – and, sometimes, especially – the best variety shows suffer from “wow” overload but everything here just flows naturally largely down to Limits who superbly drawing the audience’s attention as the set is tweaked this way and that.

Overall, this show is a treat from soup to nuts. As director, Corcoran should be proud of Hotel Black Cat. Her direction is near-flawless throughout and she demonstrates subtlety and deftness in an art form that rarely makes a virtue of either. She gives the artists licence to veer from their usual shtick and show off new sides of themselves. A prize example is how Katharine Arnold gets to do much more than the mid-air magic she is best known for: as well as a burst of her trademark aerial antics, we see her put on a spot of tap dancing before later joining Nathan & Isis in a dazzling display of three-way acro-balance. Corcoran manages to keep the whole shebang rolling without the need for an interval or a serious breather and her considerate arrangement of the acts gives each room to breathe and develop; despite the hefty headcount, there’s definitely no sense of anyone being shoehorned in.

Shows of the length and quality of Hotel Black Cat are at a premium this year. The ambition shown here deserve the widest audience possible.