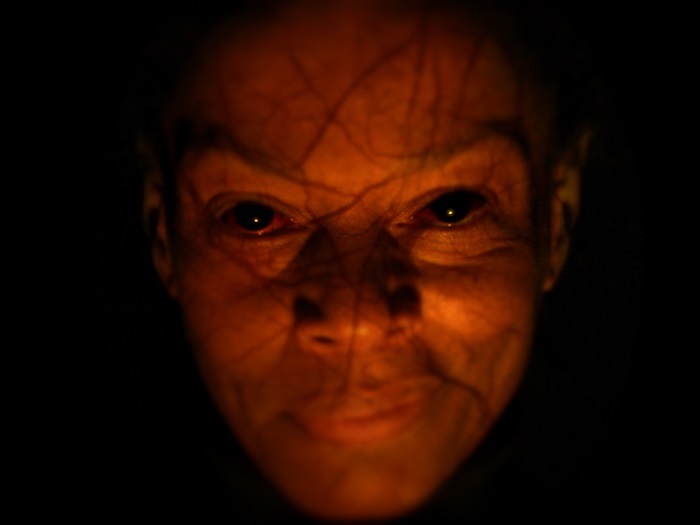 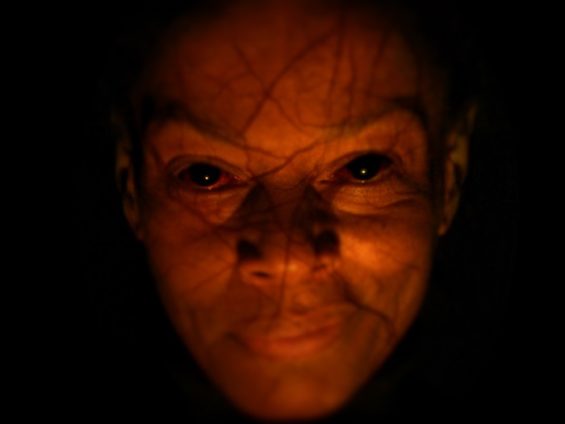 “Who could you be if you lived without limitation?” This is the premise of Hellscreen, a play by Morgan Lloyd Malcolm adapted from a Japanese horror story by Ryunosuke Akutagawa published in 1918.

Although largely known for his more flamboyant drag persona, Woo has been demonstrating his prowess in other areas; one example the East London Lectures, a solo performance written and performed by him. It is refreshing to see him here take on the role of an obsessive, distressed artist, and his onstage charisma is matched by Llewelyn who captures the manipulative and formidable nature of a self-serving art dealer. The ingenious stage design features eerie projections designed by Susan Luciani and minimalist but effective use of props to further augments the unfolding horror of the story. The traverse seating within the cavernous venue adds to the intensity and darkness of the piece.

It is a pity that the plot feels thin in comparison to the excellent acting and design. There are many leaps between events and oftentimes the ensemble has to advance the story through narration. Whilst their presence is an effective device to make the audience a part of the show, it is done at the expense of interaction between the main characters.

As such, many of the themes are not dealt with thoroughly. For the entire length of the play Frank Holt believes in exposing corruption and in doing so purge evil with evil. While his obsession with fame and perfection are understandable, the motivation behind his dealer who “enables” him and his pure-hearted daughter are not as clear.

For a play that deals with themes such as good vs. evil and voyeurism, the choice to bring in an ensemble also creates a constant tug-of-war between lyrical physical theatre and the brutality of Frank’s projects. Whilst visually pleasing, a stylised portrayal of someone being stabbed is less poignant and effective than a direct portrayal of death would be in getting the theme across.

Compared to other works that deal with morality in the modern world such as Channel 4’s Black Mirror, Royal Court’s The Ritual Slaughter of Gorge Mastromas, or acclaimed Japanese manga Death Note, this theatrical adaptation feels half-baked. Having said that, Hellscreen deserves merit in its various experiments with representation. By the end of the show, the audience are drawn into the surreal world of Frank Holt with the lingering question “how far would you go for art?”