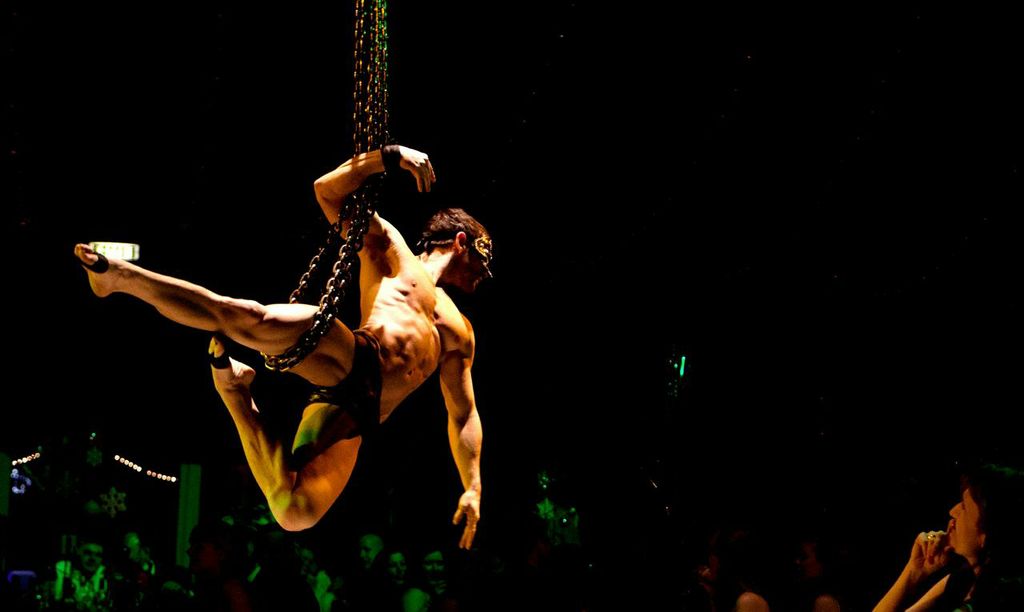 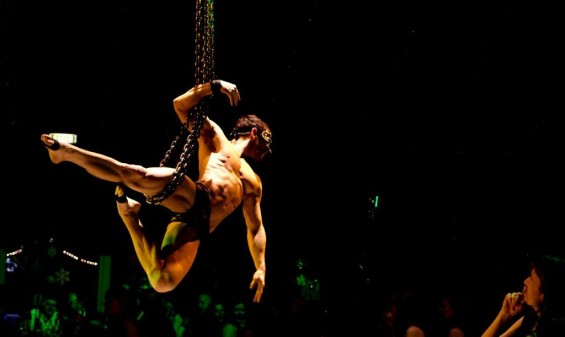 The showroom of the Hippodrome Casino has a good set-up for cabaret, and Ophelia Bitz is a great compère: naughty, cheeky and funny, she prances around looking like the cat who got the cream. A big draw for this show is the quality of the performers. Sir Leopold Aleksander is one of the openers with a true one of a kind act.  His feats of strength – presented as a lecture on the art of gentlemanliness, valour and honour – are just as good each time I’ve seen them. He offers a skilled mix of good comic timing and strong character presence, whilst also performing a wide variety of impressive testaments to his abilities. He smashes a watermelon with his forehead, breaks out of handcuffs, cracks nuts with his massive hands and politely offers them to the ladies in the audience, and a whole lot more. By the end of his act, the stage is strewn with discarded bits and pieces.

It’s not all about the gentlemen here though. The Du Sol Sisters, Delia and Yvette, perform a great double aerial hoop act. The parallel shapes they are able to pull with their extreme flexibility make this a very beautiful thing to watch. The aerial chains act by Stephen Williams is another highlight; it is strong and confident.  One of the final acts, by Ali and Klodi, offers a dance style of acrobalance that also works well, with both performers showing off a high level of acrobatics while moving continually and using the whole of the stage.

The promotional flyer states that the show will “explore the exciting world of female fantasy, with the hottest male performers in London – ladies only… shhh.”  The event seems very nearly sold out and, while the majority of faces are female, as expected, there is a good male contingent as well. Many of the performers, particularly Sir Leopold Aleksander, pull off great innuendo-laden banter with the guys and girls equally.

What strikes me is that, while all of the performers are clearly good looking and the choreography is sexualised, we still find it difficult to know what heteronormative female sexual fantasy should look like. Go to any cabaret and it’s easy to see women in a resplendent display of sexuality, with a great number of roles, costumes and fantasies to be tapped into. It’s hard not to see women in representations of male sexuality everywhere: films, TV and adverts are exploding with them.  Gay sexuality too, in cabaret at least, is very well open to diversity. The hangover of patriarchy means that honest straight female sexuality is largely unexplored. Tonight sees a lot of muscular guys, shirtless, wearing trousers; as a society it really underpins where we are right now. We don’t really know any other way to represent this.

When images of sexy females are everywhere, turning the tables and putting men in the spotlight is a good thing, for the balance of equality at least. But it would be nice if we could reach some higher understanding of female sexuality or question it a little more.

If we are getting too heavy into gender-theory here then, rest assured, this is an entertaining show with great performers. And, if you like your sex straight up and served on a plate, then it might make you a little weak at the knees too.  This is the grand premier, so it will be very interesting to see where the evolution of the show takes it.