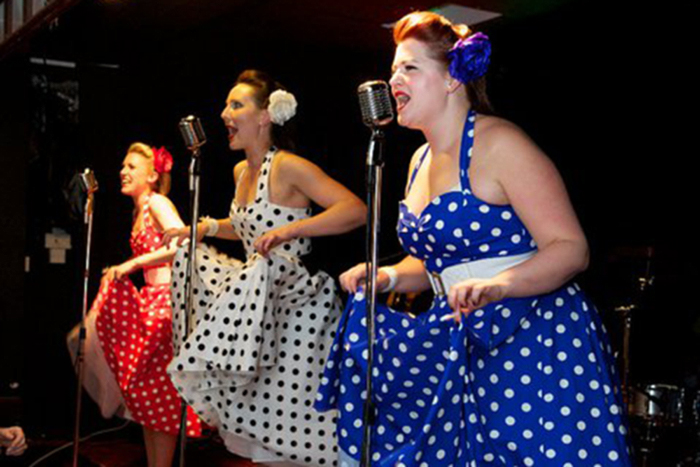 Hosted at the Battersea Barge since 2004, Cheese ’n’ Crackers is a longstanding mixed cabaret talent show. Ten contestants or so vie every month for the eponymous prize, duly delivered in a platter. An affable and diverse affair, the show doesn’t take itself too seriously – which is not to say there isn’t some serious talent on show.

The wide variety of quality acts ensures it still attracts a large, appreciative and good-humoured crowd after eight years running. Winners and losers are decided by audience vote.

This month, the majority of acts are of the musical or striptease variety. Singers, burlesque dancers, a lip-synching drag act, a female sword-swallower, pantomime dames and comedy magicians make a varied bill. Nevertheless, a wag in the crowd cheerfully protests that the first act of the second half, delightful close-harmony trio The Polka Dots, is the first to keep their clothes on. Performing crowd favourites like Boogie Woogie Bugle Boy and standards like In The Mood, the Dots have a tight, authentic take on 1940s American swing. The act is polished and detailed, down to their matching dotted dresses and vintage-style microphones. Undeterred by technical glitches that continue to mar other acts through the evening, the trio wins first prize easily.

Burlesque singer Peggy de Lune performs Fly Me to Chicago, the same number that crowned her Best British Newcomer at the World Burlesque Games less than two weeks later. The belle plays a spunky air hostess, faced with impending doom as her plane falls from the sky. Huffing an oxygen mask, the giddy trolley dolly is compelled to ease the hapless passengers’ final journey by singing a brassy show tune and liberating herself from the confines of her prim uniform. Peggy’s a charmer, and it’s certainly a compelling sight, but the brash, high-pitched Yankee delivery can be exasperating at times.

A pair of pantomime dames is an old act and queens referencing the Queen is a common comedic device, but Annie and Fannie wins the public over by prioritising genuine humour over theatrical eye-rolling and bra-tugging. A practiced chemistry and effortless banter leaves the whole Barge rolling with laughter. Annie and Fannie rank third, pipped to second by burlesque duo Whisky Falls and Lolita Velours of The Roseate Project (usually a trio, joined by fellow dancer Dee D’Lacey).

Compère Cara Cummings playfully involves the audience for the most part, but occasionally loses them with gags that fall flat. Other contestants include magicians Nick Reade and The Great Crapini, sword swallower Snake Fervor and cabaret singer Ruby White.

The Battersea Barge currently finds itself at the end of a construction work labyrinth. Until the path is clear (in mid-June, I’m told), it’s advisable to check for clear directions beforehand. Other than that, it’s impossible to dispute the advertised “warm and relaxed atmosphere” of Cheese ’n’ Crackers. This smorgasbord of music, comedy, cabaret and dairy is a sure recipe for mouth-watering fun.