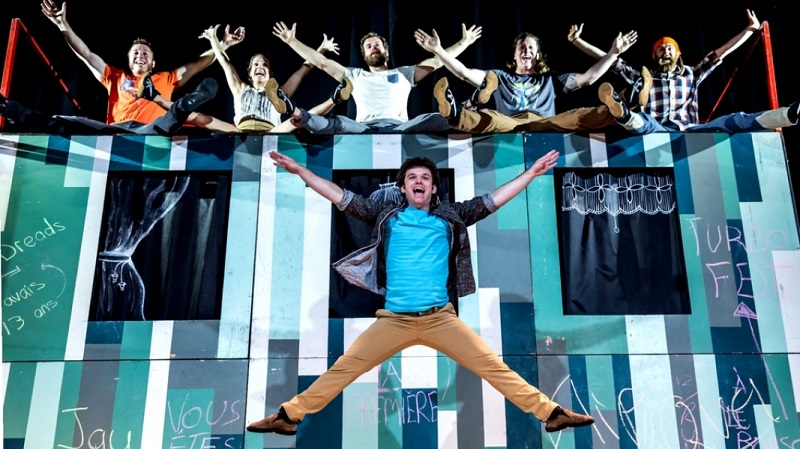 As the sun starts shining on the city and semi-naked Londoners from all points of the compass flock to the parks, it’s that glorious time of the year again: summer. And with it, we see the return to the capital’s South Bank of some of the most exciting circus to be found in the UK for this year’s Underbelly Festival, a throbbing heart of circus formed from the union of the London Wonderground Festival and the Udderbelly Festival.

Flip FabriQue’s Catch Me, in that regard, is perfectly at home here. Debuting in London after appearing in Brighton last December, the show bustles with energy and creativity and accords with the troupe’s mission statement: “(we) want to promote joy, playfulness and friendship”. The premise here is simple and follows that philosophy: a group of friends who haven’t seen each other for a long time meet up and share games, memories, romantic love perhaps.

It’s no surprise that this Canadian company is composed of acrobats who all graduated from Quebec City Circus School) and who knew each for many years before deciding to start making shows together. There is an honesty in the performers’ interactions that can’t be faked and it truly feels like their on-stage group dynamic is a continuation of their off-stage friendship.

Circus-wise, the skill levels are sky high. The double diabolo routine performed by Jeremie Arsenault and Bruno Gagnon is an absolute highlight. Diabolo isn’t the most obvious spectator sport. It can be done be peppered with acrobatics, as seen in 7 Fingers’ Traces, or it can be funny, sexy and witty like Asher Treleaven’s routine in La Soiree. Here it is performed as a duo, both performers moving either in parallel or throwing the diabolos to one another. This is the kind of act whose intricacies can only stem from artists having worked together a long time, which really comes across on stage.

Catch Me particularly succeeds when all performers work together on stage, jumping from the windows, climbing the ever-present chinese pole, making the most of a space which they have made theirs. Visually the set design and costumes lack consistency and so do the musical choices, ranging from Cinematic Orchestra’s cool vibes to Copacabana, Barry Manilow’s tale of love and loss, and switching between genres for seemingly no particular reason.

But what gives the show its consistency isn’t the music and it isn’t the atmosphere; it is the interactions between the performers. So why is the one and only female performer in the cast so often absent from these interactions?

This, in itself, is not unusual. When A Simple Space by Australian company Gravity & Other Myths came to the Udderbelly Festival a few years ago, there was only one female performer and she didn’t take part in the backflip competitions, she didn’t take part in all the group interactions, she came across mostly as a flyer, very skilled and very flexible but often tossed around by her male counterparts.

And maybe that wouldn’t be an issue in itself, if it wasn’t a recurring problem in circus shows where at some point a female performer rises into the air and spins on their apparatus, in a role that just feels limiting and repetitive because it is always the same.

The same thing can be seen in Catch Me. Camila Comin, clearly a very skilled flyer and hand to hand performer, often disappears from the stage, doesn’t participate in all the acrobatics and doesn’t participate in the lolly eating competition. She performs an aerial hoop routine which, whilst very neat and well executed, doesn’t rise to the same level of expertise and creativity as some of the other acts because she is primarily an acrobat rather than an aerialist.

At one point her body is wrapped around Yann Leblanc’s body as he spins on a Cyr wheel and it almost seems as if she is being worn as a garment, worn and tossed in the air, as if she were there to add a female element to the show but isn’t really an integral element of the group. And with a storyline that is all about friendship, this distance really shows.

Catch Me is a big hearted, incredibly creative production, but perhaps it just needs to ensure no friends are left behind.