Review: A Simple Space by Gravity & Other Myths 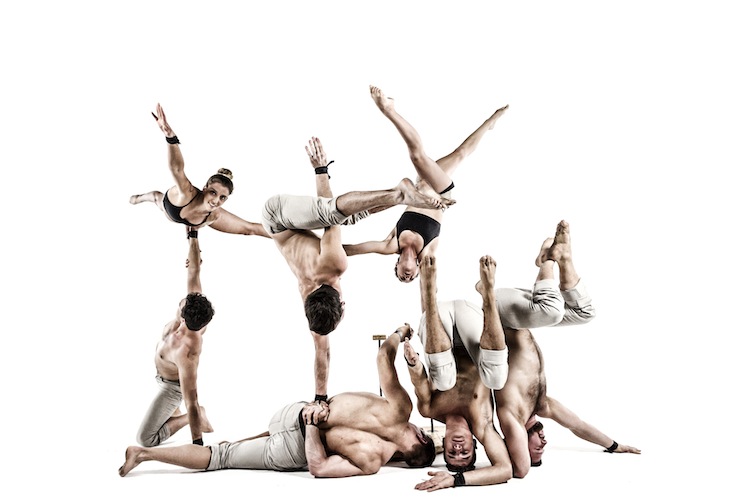 The award-winning acrobatic show A Simple Space, from Australian circus ensemble Gravity & Other Myths, made its London premiere at the Udderbelly Festival last week.  It focuses on the use of space – not only the space on the stage, but the space between bodies, the space between acts, and the space between performers and audience. Each of these seems simple at first but, after being twisted and turned in our understanding, become more complex and daring than could have otherwise been imagined. 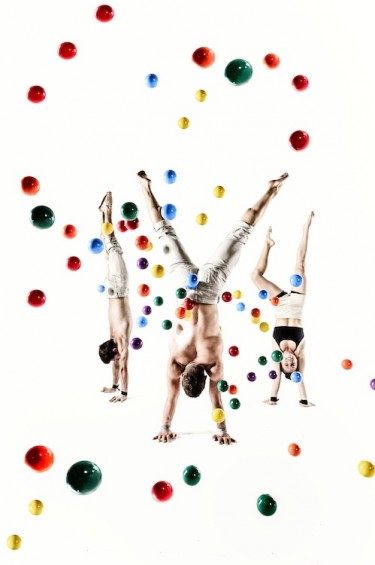 From the beginning, nothing comes between the audience and the performers.  They line up to face us wearing only trousers, t-shirts and smiles, immediately creating an intimate experience.  Their expression says, “Just look at the fun we’re going to have”.

This low-key start soon erupts into an acrobatic version of the corporate trust-game we all loathe so well, as one performer shoots across the stage, flings their arm in the air and shouts “Falling!”.  Madcap dashes ensue, as performers fall about the stage, the others rushing to catch them before they hit the ground.  This childish game sets the tone and pace of the show, where playful performance follows boisterous romp follows daring feat of balance, strength and skill.  Many moments are all of the above.

The space the acrobats use is devoid of equipment; they primarily use each other.  A stand-out example is when one performer lies down, another is placed atop him lengthways, on his side, and a third stands on the feet of the first.  They then roll, step and contort into complex, risky and breath-taking towers and shapes, with only the first acrobat ever touching the floor.

The props they do use are not those typically associated with acrobatics; skipping ropes, plastic coloured balls, balloon animals and a Rubik’s cube all make appearances, leading into several never-before-seen acts of balance and ingenuity.  I’ve certainly never witnessed seven acrobats compete to be the fastest at making a balloon-animal dog behind their backs.

The liveliness and humour of the “falling” game are prevalent throughout the show, which culminates in a high-energy scene where two members of the company are flung through the air by the others, like sacks of sugar being loaded onto a boat, spinning, thrown and passed among the ensemble with such speed that on several occasions it seems impossible they will be caught. One daring toss has members of the front row flinging themselves back in their seats, sure they are about to get a lap full of acrobat.

A Simple Space is filled with tumultuous humour, energy, creativity, colour and fun. The performers never miss an opportunity to make a joke with the audience and, luckily, never miss a catch either.