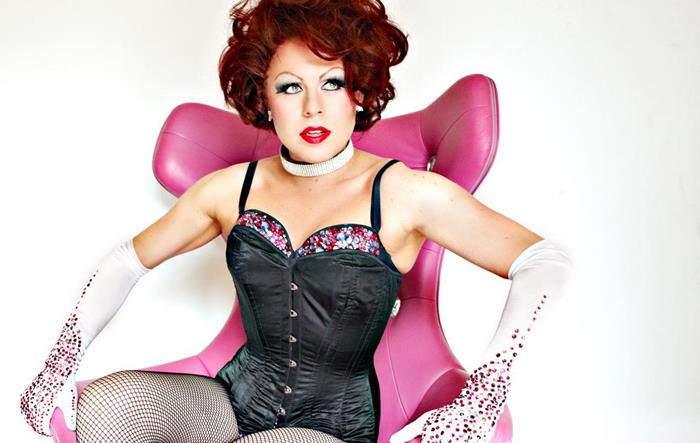 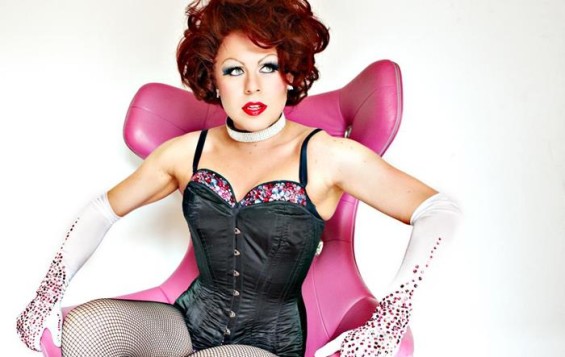 Young pups should listen up: whether on stage as the epic La Voix or applying the final touches to an array of famous faces as a make-up artist,  the hardworking Chris Dennis has made a success of not one but two careers. We recently saw the singing drag queen raising the roof and some necessary funds at the London Gay Men’s Chorus Halloween Ball. That sealed it for us. That and her epic winning performance at Drag Idol 2012 and yet another nomination for a London Cabaret Award. We don’t interview just anyone, you know.

Let’s start off with an easy one. What three things would people never guess about you?

The first us that I personally manage Pamela Anderson, and also worked as her make-up artist for five years. I have a fetish for well-groomed eyebrows and I’ve slept three nights in the Big Brother house whilst on air and no one knew.

How did the character of La Voix come about?

La Voix was created from my passion to try and imitate famous women and icons, and encouragement from close friends to get up and give drag a go. I adore trying to match people’s vocal style and sound. Before settling for my current name, I worked under many different ones from Krystal to Fanny. I finally decided that I didn’t want my act to have a name which gave it a specific gender so I can drop the drag if I wanted, and carry on under the same name.

What advice would you give to those looking to emulate La Voix’s success?

Just say “yes!” I’m very much a “yes” person. If it is drag you want to do, enter every competition, do every and any venue, any booking and any offers. You will “cut your teeth” and learn quickly how to deal with different audiences, performance spaces, areas and levels of inebriation.

Constant self-promotion is key. Never slate or insult any act online but keep posts and tweets positive and punchy. Just let everyone know you’re working no matter what you’re doing. You could play a dive of a venue with three drunk old men and no mic in the middle of Scotland but no one needs to know this. Instead, just tweet “my first intimate lounge gig of my Scotland tour tonight was unplugged and different to any other, thanks”.

Most importantly, find your point of difference and flaunt it like mad!

Has La Voix changed significantly in tone or outlook since her first outing?

My gosh! Since the first outing La Voix has changed massively. I never had the performing confidence I do now. I wouldn’t have dared even touch Cher in the early days with fear of criticism. Now its one of my most requested voices.

I feel the act is always changing and the character constantly growing. I was frustrated by how the UK drag scene was getting very trashy and grunge. It was getting to a stage where the audience were dressed better than the drag acts. I wanted to bring the glamour back and sing live and sing well and I feel gay men nowadays expect much higher levels from the drag acts around.

How did you come to meet Stephen Gately?

I met my dear friend Stephen Gately doing pantomime for Ambassador Theatre Group. I was Ugly Sister and he was of course top of the bill as Dandini. We got on very well, and I have never met such a grounded and genuinely happy guy. He was very generous to me and always pushed my act and challenged me by making me meet new producers and agents etc. He managed to get me signed to his agent and also would often feature in my acts doing duets with me.

We had simply stupid times together as well as many deep and personal chats. I remember one night in his house, we had got home late from dinner and I was staying over at his. We sat in his lounge and I was moaning about how I felt I was never going to get my break. He reassured me I would and told me its just a matter of patience and commitment. He said that night that his Boyzone break was down to him being ” just a very lucky guy”. Little did we know then this statement could never be more wrong by his sudden death.

Stephen invited me to Majorca that weekend, he was so proud of the house he and his partner Andrew had bought once it was finished being built. I couldn’t go in the end, and I’m so glad I didn’t; I don’t think anyone could have coped with what Andrew did finding him that morning. I performed his favourite character, my Shirley Bassey at the Palace Theatre for his memorial. That was the hardest performance, we were all just still in shock. I miss him so terribly but every day I dedicate my act and its growth to him and his support! We will get there Steo!

Songbook venues like St James Theatre, Hippodrome Casino, the Pheasantry and Crazy Coqs in London and 54 Below in New York rarely book drag acts with Velma Celli and Miss Hope Springs being rare exceptions. How big is the gulf between songbook artistes and their drag counterparts and why do you think drag is not being invited into the songbook venues?

I guess people have very strong pre-conceptions of what drag is. Going back to what I said, the last ten years drag has had a bit of a decline in new acts venturing outside of the usual cabaret venues. A lot of drag acts today emerging like myself are musical theatre trained actors, turning to drag and breaking pre-conceptions that we mime or sing badly.

Crazy Coqs and St James Theatre are venues I am playing next year, but I guess they want performers with strong vocals rather than simply gay bar banter. Its all about quality of the act and cleverness of the material. At the end of the day the acts are the same, its simply the choices they make for venues. I work as La Voix full time, therefore without playing the gay cabaret circuit I would need to take a second job as these songbook venues mention have long waiting lists for acts.

How long does it take to construct La Voix face and appearance before each show? What are the essentials in every make-up kitbag you’ve had?

La Voix takes an hour to construct. that includes wig and dressing. My essentials in my make-up bag are my homemade lashes which consist of 3 pairs stuck together to get the desired length and fullness. Also I have a foundation in an aerosol can from the States which is amazing, sweat proof and quick! I literally spray my face and done!

How annoying is it that La Voix shares her name with a popular French programme (their version of BBC’s The Voice)?

I copyrighted my name La Voix before The Voice started, so Im lucky as I received payment from them to use my name. That’s not the only source of confusion: I often get bookings thinking i am the Swedish Eurovision entrant Malena Emman who sang the song La Voix which is amusing.

You’ve been nominated again for Best Drag Act in the London Cabaret Awards. How important are awards to you? Would you prefer to be judged by your peers or the public?

These awards really help you too feel appreciated and also I believe a healthy level of competition and judgement keeps the cabaret scene in London growing and thriving. At this time of year, when you have gigged all year and it is  approaching Christmas, the timing of the awards give you one last boost to pull out your best material and push forward into the new year! It would mean everything to win, but to be honest to be nominated is a real achievement.

I would much prefer to be judged by the public than peers. After all, it is the public who come to watch and all cabaret acts are designed to entertain them so surely they should be the ones to judge what they like! The whole panel of judges thing freaks me out, you just have to block it out and do your thing. Only the awards night will tell if you did enough!

What are you doing 10 minutes before stage time? Are there any pre-show/post-show rituals you adhere to religiously through experience or superstition?

Whenever Im ready and fully dressed, i look in the mirror and say “hello” to the La Voix vision: “There she is”. If I’m performing a venue, I like to have madness backstage. I love loads of people in the dressing room, banter, jokes and chaos. I find this warms me up and literally throws me onstage with my energy level hitting the back of the room, violently warming the crowd up. If it is a new venue, I get nervous and I like space to prepare and go a bit inward to focus on what I’m going to do. I get snappy when Im nervous, so being alone gives me space to snap at myself.

At which point in your dressing room prep does Chris Dennis become La Voix?

Has to be putting the wig on. She literally appears before me in the mirror, before then it’s Chris with make-up on. I have a bright pink kimono I wear whilst putting my face on which helps me to feel like the camp diva is entering the room before I start. Once the wig is one and the “Hello” is done, I’m untouchable, ready for anything!

Where does the inspiration come from for La Voix’s choice of songs and outfits?

I adore 1950s actresses and all my designs are 1950s recreations from various films and Hollywood divas. As for the songs, I choose them based on the women who sing them. I adore a singer who gives every bit of her soul to a song, or performs like its the last song she will ever sing. Therefore, big belters show songs from Liza, Shirley and Cher are my favourites. I like to sing high and loud! I want the audience to witness a performance not just a song being sung.

Finally, I guess you’ve had your share of interesting audience behaviour.

Oh God! Unpredictable audiences seem to follow me to every venue. I’ve had lesbians stripping naked, punch ups, people standing on table which have collapsed and even someone who decided to run on stage and hug me while I was singing a Disney song to tell me that it was his funeral song! He then got his friends to carry him above their heads as if they were carrying him in a coffin. I tell you, Bibbidi-Bobbidi-Boo is not the obvious funeral choice!

You can keep track of La Voix’s hectic Christmas schedule on her official website.