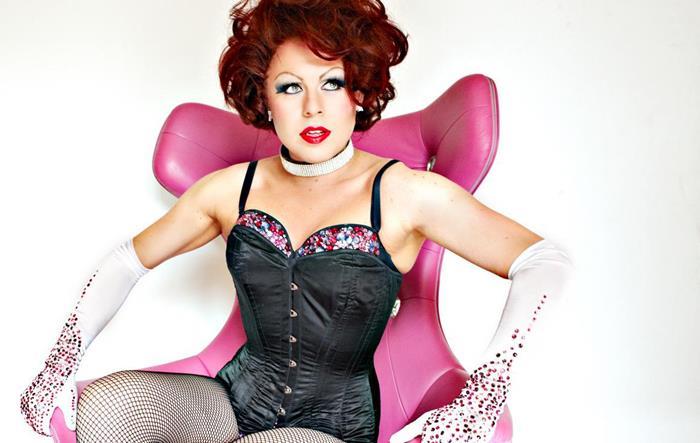 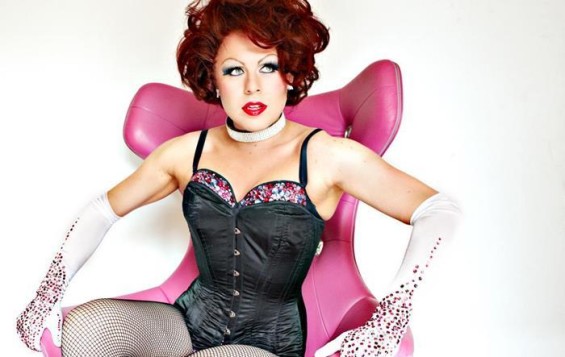 The atmosphere fizzes with excitement as the Hackney Empire fills up with fancy dressers preparing themselves for the London Gay Men’s Chorus Halloween Ball. The stage lies almost bare but for a pink bed. As the anticipation grows I sense the stage filling behind the luxurious red curtain, the lights go down and I am confronted with the stunning La Voix, a vision atop toned and fishnet stockinged legs.

From the off, her magnificently powerful but smooth voice wraps the audience in its arms and squeezes us until we laugh. Her comic timing is perfection itself and her attitude on stage is that of someone who has just received an attractive visitor at their house and is going to share something stiff with them, perhaps a drink, perhaps something else. Lucky us.

The curtain rises to over one hundred beautiful men in white shirts and dickey bows looking out into the full and silent theatre. The choir start to sing an energetic and mellifluous version of This is Halloween from the classic Tim Burton film, The Nightmare Before Christmas. There’s an imaginative use of lighting with the choristers holding concealed torches and periodically shining them at their own faces for added dramatic effect. As the night moves on, we are graced with the their version of Thriller which displays amazing levels of synchronicity from all on stage.

Back to La Voix. She hands down wins the competition for most costume changes in a show that I’ve seen. There were at least ten (three of which happened in quick succession) with a particular favourite being the hip grazing leotard clad 80s look which shows off La Voix’s remarkable and enviable derrière. Later, she introduces us to her delicious troupe of semi-clad male dancers. Six men whose eight-packs look like they have been carved from tress go through a number of intricate and well-choreographed dances, I have mixed reactions to these Adonises: unabashed awe at their dancing and uncontrollable giggling at how unashamedly sensual they are.

Maria Friedman joins this motley crew during the pitch-perfect duet with La Voix of Who Will Love Me As I Am, a song which exemplifies the true power of the latter’s voice. This show has an epic quality and the live band hold their own with solos of their own throughout including a superb rendition of the theme song to Beetlejuice. The conductor’s movements become gradually more dance like as the show progresses and his dextrous hand movements become more flamboyant, a show in itself. The evening climaxes with a medley from The Rocky Horror Picture Show, at the end of which we are treated to a Riff Raff (Doug Paulson) whose voice bursts out like a newly uncaged eagle flying elegant circles above our heads, leading to a deserved standing ovation to Paulson and the cohorts.

The choir present a show full of energy with only a few misgivings. La Voix’s quick wit and cutting sarcasm was a rare treat whenever she unleashed it and more of it would not have gone unappreciated. Also, some of the quips seemed a tad overscripted. Overall, though, this was a night my eyes and ears will remember for some time.

Funds raised by The Halloween Ball are going into the charity which assists the LGMC’s youth, education and outreach programme.