Just What The Hell Is Boomtown? 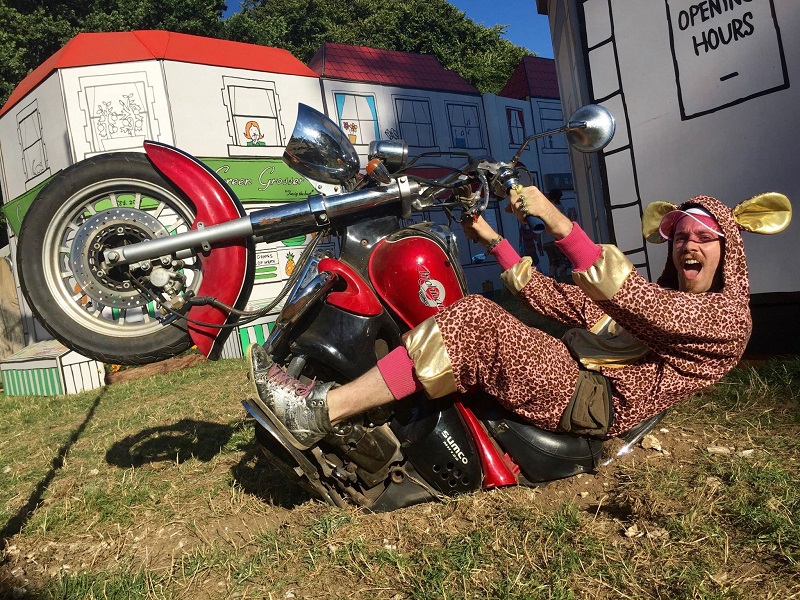 Boomtown is almost upon us again with Chapter 9, “Behind The Mask” taking place from 10-13 August. Chivaree Circus producer Edward Gosling (above) has performed there before and knows well its unique atmosphere. As the co-founder of a company which created the award-winning Becoming Shades and will be debuting their new show Crash next month, he is a man well-versed in the UK’s indie circus scene and has a particular love for this festival.

Amid this midsummer melange, there’s music but there’s also immersive theatre, circus and surprises aplenty around every corner. Here Edward explains just how this event has gained such a cult following.

A compère leans into the microphone and whispers gently to the audience, “hey kids, be careful out there. It’s hot. Stay safe. Remember, if you die in Boomtown, you die in the real world too.” It’s fair to say that this is a music festival like no other.

And he’s not wrong. It is hot. Goddamn stinking hot. The dry ground sighs as if gasping for a tiny drop of moisture. I’m pretty sure it’s the summer of 2016. On stage a band is running late. The stage is built like a huge old windmill, or some kind of oil lever; it seems powered by the wind. Some kind of mining equipment. I’ve never been in a mine in the American deep south, but I imagine they have pieces of kit like this: a giant structure which blocks out some of the sun.

Boomtown is the most exciting and ambitious live event in the UK and Chapter nine is just a few weeks away. If you haven’t been over the last eight years – seriously – what have you been doing with yourself?

It’s a special kind of town. A place where dreams come to life in glorious technicolour. Where a stroll through the Old West-styled quarter can become something much more literally in an instant. To my left a saloon door bursts open and three people fall out of it. The men wear black suit trousers and waistcoats with white shirts, large hats and worn cowboy boots; the girl with them wears a blue dress with frills and ruffles, her hair half up, with a few curls falling around her shoulders. After them another man strides out, drawing the pistol from its holster. The girl cries out, “please sir, be generous, don’t you know it was a mistake? My friend here tripped – he wasn’t after no trouble!”

The three figures hunch down behind a bunch of barrels while the other man paces and snarls “the hell with you, he was after my wallet, and I’m going to show you what for thief.” One of the crouching trio pulls out a concealed pistol from under his waistcoat, stands up, points and starts to shoot. His two friends fire off a few rounds until one of them falls. Up above, the townsfolk who have been looking down from their windows look away. Two medics come out, put the “dead” man on a stretcher and carry him off. Life in this version of the Old West returns to some flavour of normal.

It’s not all like this. There are twenty-five main stages blasting out live and electronic music across the day and into the morning. The festival, a town, a city, keeps evolving through the weekend as new venues (banks, post offices, hotels) keep being added.

It is the closest thing to a full body visual pulsing orgasm a human can achieve.

There is the now legendary Banghai Palace, a whirling, glowing mixture of lasers, LED screens, and flaming explosions at the centre of Downtown that comes alive when the sun goes down. To say it is a big stage is an understatement. It’s a feat of engineering. It’s a pyrotechnic apocalypse. When the bass drops, it is the closest thing to a full body visual pulsing orgasm a human can achieve in a field surrounded by 60,000 other revellers.

The festival also has 80 smaller stages as well as its own currency, its own newspaper and its own ethos. Some of the “micro-venues” have their own DJs while others are purely experiences. File into the Job Centre and there will be people to greet you, enquire about your skills, give you interview techniques and try and put you to work somewhere in this busy ever-engaging environment.

One of the largest immersive worlds and the maddest city on Planet Earth.

Boomtown is tightly run by an experienced production team who have grown the festival very quickly, but it’s the décor, set, design, vibe and community spirit that keeps bringing punters back. Performers, actors, bands, DJs, artists, party crews and techies, they all put this event firmly in their diary as a weekend to come and work hard and give their time to be part of one of the largest immersive worlds and the maddest city on Planet Earth. It’s a festival that is only possible because so many people go above and beyond what they would do to make it happen.

Those searching for circus and cabaret should be able to find pop up performances dotted around the venue. In the past, with Chivaree Circus I have made fire shows for various stages and run immersive experiences, including for my good friends at Disasocia. Bassline Circus have had multi- disciplinary shows with talented performers like Lil Rice. Invisible Circus have made aerial shows coming off a giant pirate ship stage. This year look out for Gypsy Disco with their upbeat party circus cabaret and Copper Feel Cabaret which is a burlesque heavy show in Mayfair.

As the UK lurches from one political crisis to another and we watch disasters unfold alongside terrorist attacks, things can feel overwhelming. Thank God for Boomtown, the antidote to all of this. A place that can make you feel more alive, that is so spectacular you can fall in love with parties all over again. With such an epic scope, it’s hard to believe the intricate detail you can find everywhere. It’s why everyone’s experience will be different. Performances may only happen for a few people, so there is no way to see all of the festival, but that’s ok. Whatever you see will be worth it. Beg, borrow, buy, steal a ticket as soon as you can. Boomtown is redefining what a festival can be!