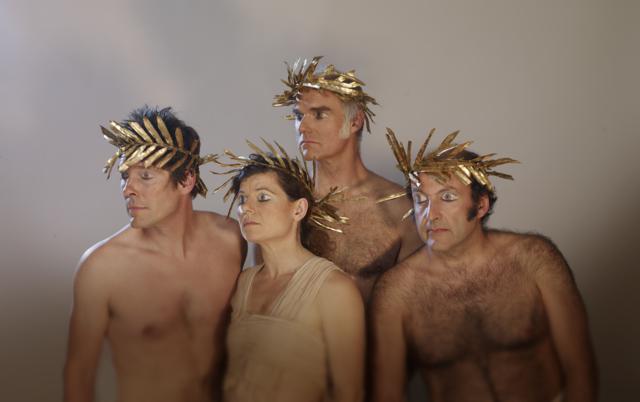 No prizes for spotting which one is Petra Massey.

Spymonkey returns to the Lyric Theatre Hammersmith this week with a brand new show, Oedipussy. The quirky quartet of Petra Massey, Toby Park, Aitor Basauri and Stephan Kreiss specialise in mashing theatre, comedy and cabaret into a single evening and their latest production blends Greek tragedy, sci-fi and Bond flicks.

The keen-eyed amongst you may have spotted Petra as Mandy, the pole-dancing marketing director in recent Pleasance Theatre production Office Party. We caught up with her to talk about how the latest show started, her North London neighbourhood and her days as a university protestor and, later, as a performer with Cirque de Soleil and Spymonkey.

Office Party was a genius show. I blame the recession for it closing early but it was an amazing concept and I loved the twisted genius of it, I love the social comment that it made. It’s a little bit like the Truman Show, the way it blurs the line between audience and performers, and that used to be a dream of mine when I was a kid that I used, that I thought I was starring in an epic, that my whole life was a film.

Like all our shows, Oedipussy started brewing a couple of years before it hit the stage. Oedipussy comes from Spymonkey’s love of wanting to do a sci-fi theatre show. We were always interested in Barbarella – that really cool sci-fi James Bond look – but wanted to introduce some Greek tragedy. Our inspiration was a review in The Scotsman which said something along the lines “watching these 40-year-olds cavorting about the stage is nothing short of depressing.” It was the most damning, damning review we had ever had. We’re sort of taking that review plus my knees are about to go and I have to take painkillers, Stefan has lumbago, Toby worries about everything, all the time, (being the actor-manager), so we are all bringing some tragedy to the show.

We didn’t realise the verbal innuendo of Oedipussy until much later – none of us did. Director Emma Rice came up with it. We spoke about doing a show Oedipus with a Barbarella/James Bond flavour and Emma Rice suggested the name and then it stuck because every time we said Oedipussy, everyone laughed. It was only a month later that I thought about what it sounded like out loud. When we were in Brooklyn, we realised that it sounds even worse in an American accent so we’ve blown our whole touring campaign for going to the States.

I always wanted to do theatre; it was my passion as was street performance. I used to go and see the street performers every Saturday for years and years, taking intricate notes. I ended up going to Middlesex Poly and doing a degree in Performance Arts. I got their first ever Street Performing module going along with standup Hugh Thomas. I wanted to do my final dissertation as a street performer but they didn’t have a module which could recognise that as an artform.

I remember seeing Hattie Heyridge at the Poly’s Squirrel Club as well Jo Brand when she was the Sea Monster, before they were famous. That was what first inspired me to do comedy. I got into a couple of drama schools but I didn’t want to come out as Donald Sinden. People come out of each school as a particular type and I didn’t want to be a specific type. I liked the idea of having a degree and, even though that degree is useless now, I made some lifelong friends. I was still very naughty there, climbing out of windows and it was my choice to go to the college but I was still rebelling and that’s what I did and I still do, even now. That’s why I started my own company so that the only person I can rebel against is me. It’s not even worth rebelling against Toby as he’s such a pussy. I can go boo and he’ll burst out crying.

I was part of an organised occupation of Middlesex Poly. It was during the education cuts (and here we are again). All the Poly’s colleges were closed and we took over the Trent Park site. For ten days, nobody could get in, not even the police. We organised cabaret nights and then one evening, everyone was in the process of rolling a great big reefer when we were carted into about twenty white police vans. They dropped us off in the middle of nowhere (Cockfosters?) and we had to walk home from there in the middle of summer. We had the best time, it was brilliant.

If I had to take the Spymonkey boys out for a day, I would take them to Covent Garden. After college, I was a street performer for about three years. We used to have these hand warmers but we would still freeze our arses off. We used to sit in an Italian restaurant, Maria’s, not eating just drinking tea until it was time to do a show and it was desperate. Sometimes when we got out there and got a crowd, it would rain or it would be so cold that people didn’t stick around for the show and you would make £20 and that would be what you had to live on. It really was the school of hard knocks and I don’t regret one single day of it. I’m glad I didn’t stay in it because I think you can get quite hardened and in a bit of a rut. If you don’t find vulnerabilities and softnesses as a performer, it can become not that interesting and not that enjoyable.

I’m glad I knew when to stop street performing. I remember being in Bradford with Bobo The Clown doing a street show and thinking “this ain’t fun anymore”. It was a very clear decision. I packed up and never did street performing anymore. I was skint and hungry for a few years but that was when SpyMonkey happened.

I did standup for a bit but I liked that less than street performing. If the crowd didn’t like you on the streets, they could just walk away. Also, I got lonely. I was doing solo shows and I wanted to work with other people, bouncing ideas off them. I did a show in Germany which was a big arena outdoor event. I was bungee diving, flipping off motorbikes into lakes and driving a 1960s crane which went out of control one night and almost killed the audience. Through that show I met my husband as well as Toby and Aitor. We also met Stephan Kreiss, Spymonkey’s funny German clown. The original Swiss one, Paul Weilenmann missed the mountains and left so we had to find a replacement Germanic funny man and they’re quite rare. For Stephan’s audition, we made him do Hitler impersonations and that was how he got the job.

Spymonkey has Arts Council funding now but we’ve been turned down in the past. When that happened, we said “fuck it, let’s fuck off to Vegas” which was a great thing as we went on to work with Cirque De Soleil and not what a small fringe theatre company normally does.

One of my own favourite all time theatres is the Hackney Empire. I would love to have a Spymonkey show in a West End space that could seat 400. The Lyric Hammersmith is perfect but a little out of the way. We do want to have a West End show, it’s a goal of ours. Why not?