Interview: Burlesque Queen Midnite Martini On The Highs And Lows Of Her Rise To The Top 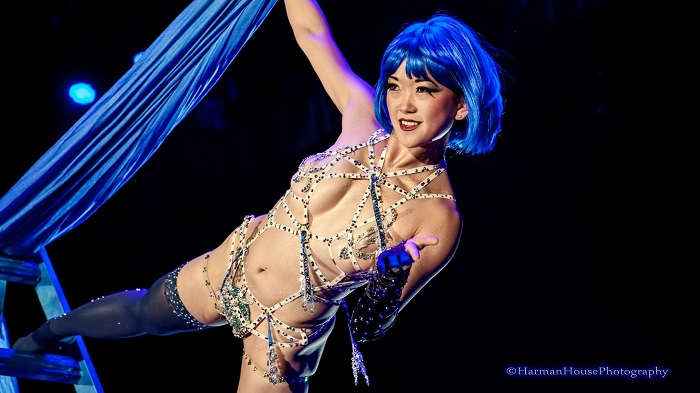 When Midnite Martini became the highest profile burlesque performer in the world in 2014, she did it in unique style.

Every year, the Burlesque Hall of Fame Weekend (BHoF) in Las Vegas awards one performer the prestigious title of Reigning Queen of Burlesque. In 2014, the South Korean-born dancer Midnite Martini took the award with an act which was very different to the more traditional acts. Her “Blue Siren” routine made superb use of her circus and aerial skills, something which literally and metaphorically elevated her above the competition’s more classically-minded contestants.

This weekend, she will be headlining Milan Extraordinaire, Italy’s first festival dedicated to burlesque and cabaret. The three-day event is produced by the founder of the Milan Burlesque School Mitzi Von Wolfgang, restaurant entrepreneur Giorgio Marchisio and top European burlesquer Cleo Viper and features many highlights from around the country and beyond.

We spoke to Midnite Martini about the challenging climb she has had to her position in burlesque royalty.

People are still talking about your winning act a year on. What was it like performing it at BHoF?

My Blue Siren act combined aerial and burlesque set to modern music. I wore a bright blue short wig and was more like a trippy anime daydream. Again, I didn’t actually think this alternative style would ever win the crown, but that’s probably why I won! I didn’t think that act really had the chance of winning, so I went out there and performed without the internal pressure. I felt the audience, the music, and performed from deep down inside.

Did you think that your aerial skills were a bonus when you appeared at the Burlesque Hall of Fame?

Funny enough, I never thought my “unique” style of burlesque would win at BHoF. I was very shocked when I actually won the crown. My Blue Siren act that I won with was very “neo” for what I thought BHoF wanted. I was under the impression at that time that only classic acts scored well there but, as our art form changes, so do the establishments and trends and I don’t think that is necessarily the case anymore.

“I’m extremely proud to be a face and voice for POC who often don’t feel seen or heard. Things like that fill my heart and soul and make me feel like I’m apart of something bigger than myself. And that is why we do it, right?”

I’m very honoured to be a title holder, especially with this act. I’m very proud of the fact that I am also a Performer of Color Queen and it has meant very much to have other Asian performers tell me how important it was for them to see someone that looked more like them be crowned. It gave the message that a person of Asian descent can be seen as beautiful and successful in a “Western” competition and I’m extremely proud to be a face and voice for POC who often don’t feel seen or heard. Things like that fill my heart and soul and make me feel like I’m apart of something bigger than myself. And that is why we do it, right?

Take us all the way back to the beginning. What first got you dancing?

I was a figure skater when I was much younger and started taking dance classes to help with my skating. Honestly, I was never that graceful as a figure skater and I really took to dancing, so after a few years I decided to hang my skates up and focus just on dancing and theatre. Soon after, I joined youth community theatre groups in addition to dance classes and that’s when I fell in love with musical theatre. I was a total “Broadway” nerd all growing up (and admittedly still today). I took as much dance and theatre as I could through school and ended up getting into what was then a pretty prestigious musical theatre programme for college.

I understand college was a particularly tough time for you.

In college, the musical theatre program directors were very harsh and “real” about the professional dance and theatre world. They told us all that we needed to lose weight and that it didn’t matter how much talent we had: if we didn’t have the female hourglass or the male V, we’d never be hired.

Being one of the only minorities growing up in an all-white family (I was adopted from South Korea as a baby) and living in a predominately Caucasian community, plus being female, a perfectionist, and a dancer I had already struggled with body image and self worth throughout childhood.

After having spent most of my high school days dieting, restricting and not feeling good enough, the words from my program directors pushed me over the edge and my regular dieting and obsession with exercise turned into full blown bulimia. I restricted, binged, purged, over-exercised, and became deeply depressed.

One year later, I quit that program and transferred to a different university. There I studied psychology (which I have my degree in) and  continued to struggle with my bulimia and decided I’d never perform again.

After another year of not performing at the new university, I felt like a piece of me was missing. I wanted to start dancing again, but knew I didn’t want to go back to the traditional dance and theatre environment and yearned for a space where I could perform but keep myself healthy.

After all of that, how did you move into circus and burlesque? And which came first?

I found myself auditioning for a local company that combined modern dance with aerial apparatus, Frequent Flyers Aerial Dance in Boulder, Colarodo. and ended up auditioning to join their company. I had never done circus or aerial before but, at that time, the company was looking for dancers who they would then train in aerial. I had always wanted to run away and join the circus so thought here’s my chance! Thankfully I got into the company; I was just 20 years old and this was a turning point that really changed the rest of my life!

I still remember the first company rehearsal I had with them in which one of the company members brought chocolate for everyone to share. I thought to myself, “What?! Is this a trick? They eat chocolate?!” and I knew that this company was a much different environment than what I was used to. They were more concerned about health, strength, and movement quality than what you looked like or what you weighed. I mean this in the most loving way, but it seemed like the circus/aerial world was a safe place for the misfits to come together and create. I felt like I had found a community to which I could relate.

So how did burlesque come into the picture?

Soon after joining Frequent Flyers, I had started wondering about this thing I had heard called burlesque. Honestly, I didn’t know much about it but had a sense that maybe it was another place “misfits” like myself could thrive. I started doing my research and found that there was a burlesque troupe in Denver.

I contacted the troupe leader, Vivienne VaVoom, and told her I did aerial dance and wanted to learn more about burlesque. Vivienne invited me to come watch their next show and when I did I instantly fell in love. The burlesque show had the character and quirk of musical theatre with the acceptance of performers of different shapes and sizes. I met with Vivienne after the show and told her my story and dance background.

Now, you have to keep in mind that this was back in the day, burlesque was still quite underground and unknown in Denver, and I was able to get into burlesque performance differently than what you do now. But back then Vivienne just said, “why don’t you bring two routines and perform in our next show?” And I gladly accepted!

“I was always fascinated with trying to surprise the audience.”

I used my dance and musical theatre training, developed two routines, came down to the bar (where they snuck me in the side door as I was still only 20 at the time) and performed my very first burlesque acts. Vivienne and the troupe liked what I did, they asked me to join the troupe and I performed with them for the next several years.

From there my aim was always to try and blend my dance/circus training with burlesque as seamlessly as possible. I’m sure I didn’t always succeed in this, but what true artist ever does? But my intention was always to have the different art forms flow together and create routines that were true hybrids of striptease and air/circus dancing. I also create straight aerial and straight burlesque routines, but have become most known for my aerial burlesque fusion.

I was always fascinated with trying to surprise the audience. Show them something they’ve never seen before. Sometimes that meant experimenting with moves I could do on a folding chair (like my signature stocking removal) or deconstructing feather fans to create my original design (which I call the Midnite Finger Fans). Being innovative (or attempting to be innovative) was always something that kept me inspired and interested. So I think my style and approach to burlesque really stemmed from those two driving forces, fusion and innovation.

More recently though I’m finding that my inspiration is coming more from playing with vulnerability onstage. I’m curious and excited to see how my style continues to shift as the focus of what stirs me in performance continues to morph!

The second Milan Extraordinaire takes place on 25-27 November. For full information, check out the official website.