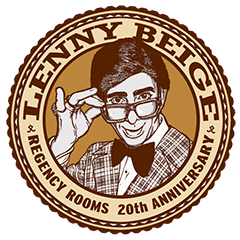 Lenny Beige will be recreating his old stomping ground this Friday.

This Friday, one of London’s premier showmen goes back to his roots for a very special show.

True twentieth century British showbiz legends are rarer than hen’s teeth these days. Most have retired, expired or are being investigated by the boys in blue. A notable exception is the king of kitsch Lenny Beige, son of the infamous “Kosher Chicken Giblet Queen of Whitechapel” and owner of the UK’s largest collection of Tony Hart originals. Fans old and new can see him celebrating twenty years in the business that is show this Friday when he headlines a gig of Biblical proportions.

He recently made a return to the London stage with a show at the St James Theatre but his latest outing sees him recreate a place very close to his heart. As Beige tells it, Robbie William’s hit Let Me Entertain You was inspired by Beige and the Regency Rooms Club. “In 1997, big-haired keyboard player and writer/producer Guy Chambers was my musical director at the Regency Rooms Club at Talk of London. This was the same time he bagged the gig co-writing with ex-Take That singer Robbie Williams. Let Me Entertain You was a song written to perform at my club night; exciting, vibrant, cock-sure, and uplifiting – all the things the club (and its) host was.”

Grab your tickets fast: Beige has already had to supersize his show’s venue when the original batch of tickets sold out faster than a 1970s radio DJ on his way to the clink. You can catch him and his cohorts at the Kensington Great Hall on Hornton Street (staggering distance from High St Kensington tube). Tickets and more information are available from his website.