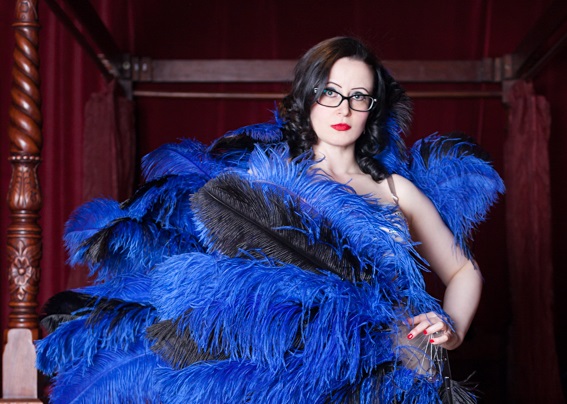 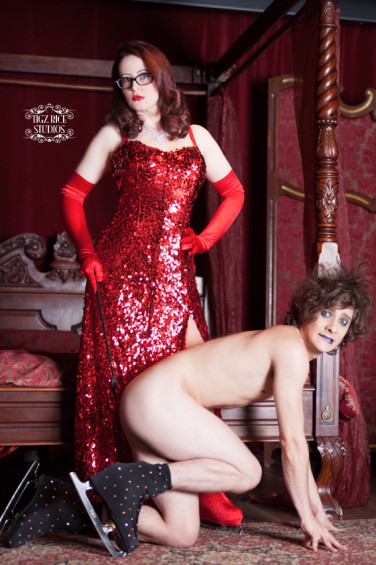 At This Is Cabaret, we applaud new concepts and ideas and the brave souls behind them especially in areas like burlesque which in recent times has seemed in danger of disappearing up its own Swarovski’d fundament. At its heart, we believe that the best burlesque challenges the audience with a glitzy display combining dance, music and theatre. A new production beginning next week ticks all these boxes and is surely one of the talking points of 2014.

Having previously been as a barrister, Burlesque On Ice‘s producer Sam Jenkins’ origins are every bit as unusual as her creation. Her show – which Jenkins claims is the first of its kind – had a soft launch last year at Westfield in Shepherd’s Bush and will make its official debut just down the road at Bush Hall. The impressive cast featuring professional burlesque performers like Vicky Butterfly, Glorian Gray, Mia Merode and Ruby Deshabille who will skate their way into the history books between 4 and 8 February. Before all that, we had a chinwag with Jenkins herself.

You have to admit that Burlesque On Ice is a bit of a bonkers idea. How did you come up with the concept for the show?

After performing a routine which combined ice skating and burlesque, I decided to look into whether or not anyone in the world had ever combined these two disciplines. I was quite astonished to find that no one, not even in Vegas, had done it. I spoke to a few people about the idea and the logistics of either using burlesque performers and teaching them to skate or using skating professionals and teaching them to burlesque. The final show has a nice mix of both burly girls and professional skaters.

It could not have been an easy feat to put on such a large scale show at a Central London venue. What inspired you to create the show?

I have been interested in burlesque for a number of years but, because I was a practising barrister, the professional code of conduct would have precluded me attempting to become a burlesque performer. I started ice skating as an interesting way to keep fit after I left the Bar to work as a consultant. The first time I fused burlesque and ice skating together was as part of a skating test wherein I did a burlesque fan dance on ice. After this, the idea of putting burlesque and skating remained in my mind and one day I contacted the fabulous Miss Polly Rae to see if she would be interested in coming to the rink to have a look at my routine. Polly was kind enough to help which led to me performing it at an ice show – it went really well!

You have assembled a highly credible crew of performers, especially considering that this is an untried concept. How did the show come together?

That could be a thesis in itself! I placed casting notices on various website such as the Ministry of Burlesque and Star Now and advertised the show as a new burlesque show with a twist. When people applied I told them the twist and some were immediately put off and others thought it was great. I held auditions at my rink and again at a dance studio to cover both disciplines and then cast the show. I was also approached directly by a few performers such as Vicky Butterfly and we met and went for a skate and a coffee to talk about what would be involved.

The girls who were new to skating them undertook a period of skating lessons with Sarah Christou at Queens Ice Rink in Bayswater and put in a lot of extra training hours, over and above what I had required of them. They were all bought memberships to the rink so they could skate whenever they wanted to with no additional costs and they also had skates fitted for them personally.

The training continued and then the choreography began when we were asked to perform at the opening of the Christmas Ice rink at Westfield in Shepherd’s Bush. This was an interesting experience and a valuable one as it gave the cast an introduction to how it feels to perform on ice in front of an audience. For me, as the producer it was a real eye opener as to who could manage to perform and skate and who couldn’t. It is worth mentioning here that Glorian Gray really stole the show at Westfield as the best human skating Christmas tree I have ever seen!

We are now rehearsing on synthetic ice for the show in our rehearsal space in North London and everyone has adapted really well. The show is coming together and at the very least we promise you a very different type of burlesque show!

So tell us a little more about what the audience can expect.

The show is a fairytale story of an ice skater who is unhappy at just being a skater and, with the help of her Fairy Godmother (the rather marvellous Gwendoline Lamour) she happens upon the world of burlesque and decides to combine the two disciplines.

The show has distinct comic elements thanks largely to Joe Morose, Glorian Gray and Miss Danni Dee plus high level skating from our professional ladies and impressive burlesque performances. The show should appeal to all those with an interest in skating and burlesque and anyone who fancies a fun night out and a laugh!

Check it out for yourself: we have pictures of the cast and from soft launch at Westfields right over here.

Burlesque On Ice can be seen at Bush Hall, 310 Uxbridge Road, London, W12 7LJ from 4 to 8 Feb 2014 at 7pm and 9.15pm. Tickets and more information are available through the official website or See Tickets. You can also follow them on Twitter and Facebook.