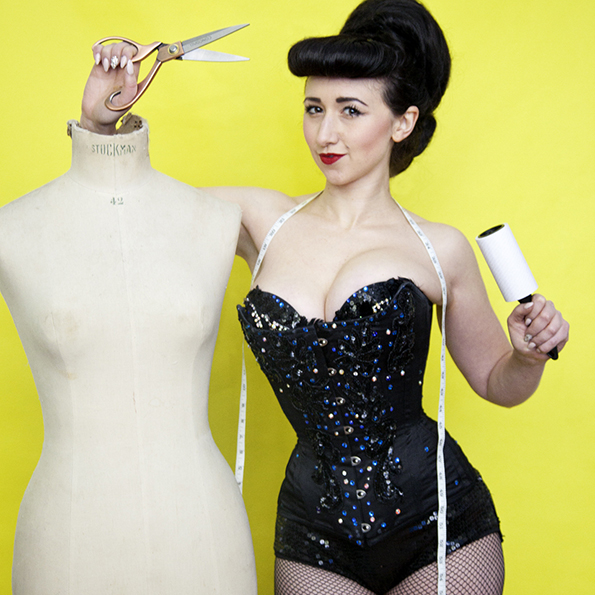 The Independent may have their view on burlesque but we would be surprised if their columnist Imogen Harris popped in to see Elsie Diamond’s Edinburgh Fringe show The Sensible Dresser. If Harris did, she would have seen a performer who was more than ‘“just” a stripper’.

Inspired by her day job as a dresser,  Diamond explores the world of costumes through burlesque and song.  And if there’s one thing that cabaret performers take pride in, it is their outfits.

Over the course of her show, she switches between nine different outfits while relaying a series of stories. Here she talks about how she puts together her fabulous outfits.

What tips would you give to other burlesque performers making their own costumes? Is there any equipment you would advise they invest in?

I would highly recommend a Netflix account for all those late nights you are going to spend sticking Swarovskis on things. I would say to not be afraid to let the costume develop as the act progresses.

Unless it is your big showgirl number that is all about the dazzling costume, it is ok to start smaller and add as the act develops. Upgrade your turkey feathers to ostrich once you know the act is a keeper. Keep costs down by mixing cheaper and expensive items for instance.

I tend to mix sequins with Swarovski and DMC grade crystals if I want a large sparkly area. They all react differently under different lights to ensure that you are always twinkling. Through dressing, I have also discovered the joy of a quick stitch. A mini kimble gun is not only good for last minute repairs – it is also great to use instead of pins if you are sewing something particularly tricky. If you can do a quick repair for someone, it also makes you very popular in the dressing room!

What is your background in costuming? Was it always a passion or did you want to be something else when you grew up?

I studied Costume Design at Wimbledon School of Art and, although I dabbled in performing as a teenager, by the time I was 19 I had decided that a costume designer was my dream job. Although after Wimbledon I did work in design, I also did a lot of dressing work in TV, theatre and opera.

As time went on I began to realise that my interest was in wearing costumes rather than making or designing them. As Elsie Diamond was born, I began to stop concentrating on design jobs and channelled my energy into performing. However I still kept on working as a dresser. It’s an interesting, quite bizarre job full of lots of different sometimes unbelievable characters which is where the inspiration for the show came from.

What would you say were your signature features as a costumier? (for example the use of certain materials or shapes)

Apart from getting someone else to do complicated sewing work and sticking sparkly bit on it after, I’d say texture. My costumes always tend to have a variety of fabrics and tones.

At uni, my favourite place was the dye room (I actually hate sewing!) where I would experiment with dip dying, printing and distressing whist breathing in all those lovely fumes. I always like to spray and paint into costumes as this gives them a greater depth on stage.

How did the preparation for your Edinburgh run go?

My Edinburgh show has certainly been an exciting challenge, costume wise. Although I am using some costumes from my existing acts, the difficulty has been working out all of the quick changes.

As (like most burlesque performers) I am very much used to having as an extravagant a costume as possible, for this show I am having to compromise between aesthetics and how smoothly I can change. I usually have a different headpiece, jewels etc for every act.

For this show I have nine different costumes and am bouncing between glamorous and drab characters. I have little more than 30 seconds to change which should give the audience a glimpse behind the facade of a performer.

Why do you think WW2 and music hall are still popular all these years later?

I think that people like to romanticise that is was a more exciting, glamorous time. In reality it was probably extremely scary and the food would have been rubbish. But it is escapism and people like to put themselves in a different era to have a break from modern life. Getting dressed up and going to a cabaret club or music hall show makes people feel like they are in a movie and who wouldn’t want that? That and the fact that the music and style stand the test of time.

Who would you love to design a costume for?

Not a particular person but if I were to pursue design again it has always been opera that excites me the most. I’d love to design a large scale Aida or Turandot, something that could be totally decadent and over the top. Then I would poach some of the costumes after just to swan around Wetherspoons in.