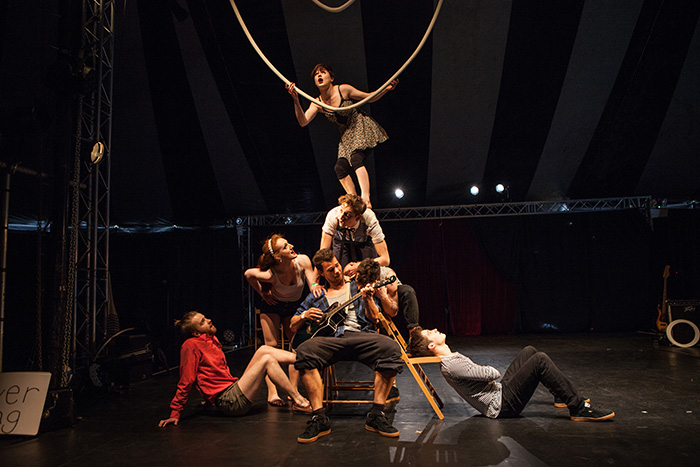 Circusfest celebrates new as well as established talent. Silver Lining are a fresh young troupe looking to impress. Did they?

Watching Silver Lining, a feeling of dread sets in from the off. Juggler Tom Gaskin approaches the audience with a plastic cigar, an umbrella and a hat. While he does some basic tricks, I can feel one of my feet inadvertently tapping out a message: dot-dot-dot, dash-dash-dash, dot-dot-dot, ess-oh-ess, same old shit.  Bad becomes worse as Gaskin’s winning smile can’t cover for his occasional unintentional fumbles. Somewhere in the back of my mind, a suspicion forms that tonight a far off street corner was absent its usual busker.

And then, while holding the cigar between his lips and balancing the hat on the umbrella, Gaskin launches the umbrella high into the air and on the way down somehow catches it upright on the cigar. There’s a hat on an erect umbrella on a fake cigar in someone’s mouth. The foot stops tapping.

It should be noted that Silver Lining‘s eponymous troupe are all painfully young and hip. Anyone with an inner urge to happy-slap every hipster they come across may need to sit on their hands during this show. Indeed, you could saunter past this photogenic bunch on Dalston High Street and not realise that they were a tight crew of fabulous circus freaks in the making.

How do we know this? Well, for starters, they know how to put on a fluid and engaging show. Over the course of just over an hour, the action swings from a Glee-like musical ensemble to a slumber party, a picnic and a camping trip. Rather than being a series of cheerful non sequiturs, artful stage direction blends the parts into a relatively seamless whole.

They work together and for each other in a myriad of marvellous and innovative ways. We’re used to seeing cyr wheels and performers in a strict ratio of one to one yet seeing Gaskin and cyr wheel specialist Charlie Wheeller spin around inside the large hoop is both refreshing and fun. The two team up on another usually solo routine, cigar box juggling; this time Wheeller is dressed as a monkey and Gaskin playing the organ grinder desperate to keep the boxes away from the chimp and within his own grasp as he throws them and himself around.

Another twist is provided by hand balancer Niamh Reilly. While the current crop of her ilk like Stephen Williams and Sammy Dineen tend to use no small amount of toned brawn to dazzle, the redheaded Reilly spins the artform in a different direction by adding to her upside-down act both live singing and expressive gymnastics. Another musical number sees Wheeller gyrating inside a cyr wheel to the sounds of Jacques Brel’s La Valse a Mille Temps; as Brel speeds himself into a frenetic fizz towards the end of the song, Wheeller matches the pace in splendid synchrony. Circus is more than just visual fireworks and Reilly and Wheeller’s routines are stirring reminders that, at times, the big top can inflame and touch the human soul as much as any cathedral or temple.

And why wait until you’re alone late at night to see two hunky guys get hot, physical and sweaty? A David and Goliath pairing, Beren D’Amico and Louise Gift are two hand-to-hand acrobats who complement each other’s strengths; the larger D’Amico throwing Gift around like so much taffeta while the latter flips and balances upon his partner with great flair. True, there’s some audible wincing heard when Gift smacked into the ground at one point but this only emphasised the high stakes and cost of this often overlooked circus skill.

Unfortunately, the aerialists’ acts don’t pack the same punch. Lydia Harper is technically adept on the double cloud with her mid-air splits and final somersault into the arms of her colleagues both high points of a routine which never really gets going before it ends. Tom Ball‘s trapeze antics are, at least in comparison to what has gone before, plain and perfunctory and feel tacked onto the end of the proceedings.

While often a little rough around the edges, there is much to applaud here. The innovative and collaborative approach to wellworn circus tropes is a welcome sight and highly commendable. Moreover, the camaraderie and interplay demonstrated in ample measure is an impressive asset to Silver Lining both as a show and a troupe. Somewhere along the way, this disparate ragbag of twisters and tumblers somehow became sisters and brothers and I look forward to seeing them back at Circusfest 2016.

For more treats like this, see our Ultimate Guide To Circusfest 2014.