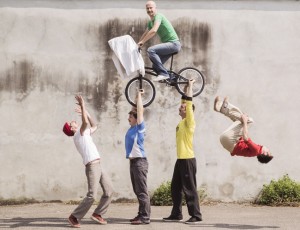 Crying Out Loud are the UK’s top independent producers of contemporary circus, and pride themselves on championing extraordinary artists. They returned from this year’s Edinburgh Fringe Festival with both Total Theatre Awards for physical/visual performance – for Pirates of the Carabina’s Flown and Company Non Nova’s L’apres-midi d’un Foehn – and they’re now offering something new to audiences in the South-East.

In 2010, Crying Out Loud helped establish the Circus Channel network, linking circus partners in France and England to provide wider exposure for artists in the sector. This November, they are bringing a double-bill of energetic circus to venues on our shores, featuring hand-to-hand acrobatics, BMX skills, comedy and break-dance, in novel productions from French company Collectif AOC, and rising British stars, Barely Methodical Troupe.

Barely Methodical Troupe was formed only this summer by three graduates from Circus Space, and their first show, ‘Oversees’, won the Circus Maximus prize earlier this year. Opening the double-bill, the company blend fearsome tricks with sequences of lyrical, gravity defying hand-to-hand choreography from Louis Gift and flyer Beren D’Amico. The pair met at Circus Space but bring very different skills and backgrounds to their performances.

London-based Beren discovered a natural talent for acrobatics after taking up Taekwondo when he was just eight years old. The acrobatics lead to an interest in Tricking, which combines gymnastics with martial arts, and he moved to Circus Space after studying performance at East 15 drama school. Meanwhile, Louis came to circus after an active childhood as a basketball player and under-11s British fencing champion. He later discovered free running and Parkour, taking up gymnastics to complement this hobby; a passion for performance developed through plays staged during his time at sixth form college.

In contrast, Collectif AOC have been working together for 13 years, and their production ‘K’Boum’ has been performed to audiences of 1000s across France. Creative director and performer Cyrille Musy explains, ‘Circus is a very important part of French culture, and we are very excited to be visiting the UK to show our work. This is one of our original productions, and displays the fun we have on stage. We want to leave our audiences happy, entertained and curious to know how we perform our tricks.’ The company are well known in France for their multidisciplinary style, mixing various circus skills and techniques, as well as dance, live music and BMX skills.

Whilst these established productions tour theatres across the South-East region, Crying Out Loud are also offering a short festival of developmental experiments in collaboration with The Place, in London.

Each night of Currency offers audiences the chance to witness a studio sharing – fresh collaborative work which is the outcome of a 2-day studio intensive involving a selection of dance and circus artists – plus a double bill of performances and the opportunity to meet artists over an informal supper.

The artists involved, representing Belgium, France, Germany, Portugal, UK, Sweden, Austria, Czech Republic, Romania and Finland, will be asking the questions: where does one discipline end and another begin? What do we mean by the terms contemporary dance, physical theatre, contemporary performance and circus? How useful are these definitions in expressing what happens on stage and how this is experienced by the audience?

An exchange of physical ideas across disciplines is the core theme that runs through ‘Currency’. Imagine placing in a room a contortionist and a dancer who don’t know each other, are from different countries and have different stories they want to tell… This is your chance to discover how they will find a common language and create a cohesive piece of material to share after only two days!