Arthur Foxaque And The State Of The Cabaret Nation 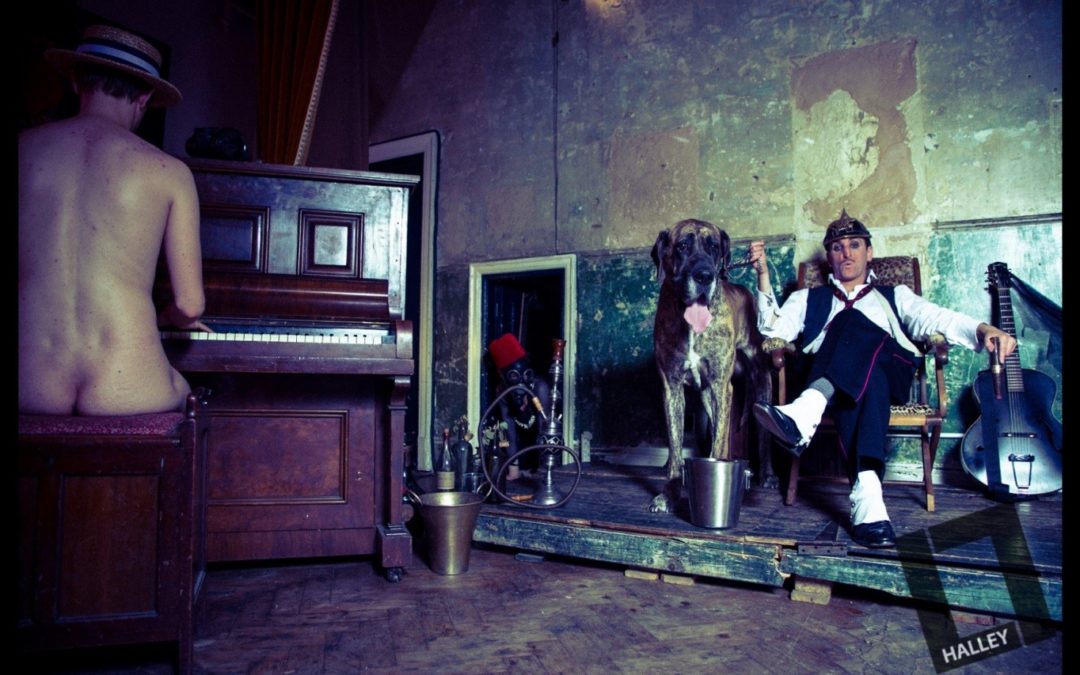 As the face, voice & vitriol of The Top Shelf Band, Arthur Foxaque has performed on the London cabaret circuit for over seven years. He’s been around the block more times than an ice-cream van and is now looking to raise the not inconsiderable sum of £100million via a Kickstarter, citing the influence of Kanye West behind this decision…

The plan? Well, if they hit their target the band wants to retire but, should they somehow fail to achieve their top target, they aim to gather enough to release their re-mastered album Gentlemen in Squalor on collector’s edition vinyl in collaboration with photographic artist, Elle Halley.

Possibly one of the most opinionated men around, even when sober, this vaudevillian philosopher king is never short of a bon mot or a pearl of wisdom borne from hard experience. After all this time, what does Foxaque really give a f*ck about? We spoke to him about the state of the UK cabaret scene and where we go from here.

Was there a scene before the Great Crash? Well obviously. With the possible exception of The Zen Hussies, I practically facilitated the re-emergence of the vintage-style cabaret house band, in conjunction with the neo-burlesque scene in the UK. I claim it. Am I wrong? Do you think I care?

Cabaret and burlesque were reaching its apogee when I arrived in London in 2008. Within months, with Josephine Shaker tap dancing alongside my band, Cherry Shakewell recommended us to that veritable institution The Whoopee Club. That was an early break! We consequently got to perform in the likes of The Gypsy Hotel, and work alongside top grade acts Frisky & Mannish, Mr B. The Gentleman Rhymer, Professor Elemental, The Bees Knees, Missy Fatale, Missy Macabre, Banbury Cross & Laurie Hagen.  You may have heard of them.

Name dropping? Au contraire, dear reader, but I’ll get to that later.

“But this is cabaret, live music, the avant-garde, the Avant-Gaga.”

Here’s the commonly accepted narrative: rents went up, the yuppie cunts moved in, started to breed and complain about the fun stuff that brought them there in the first place. Some snivelling cockwomble moved next door to Passing Clouds and instantly started moaning. The Black Cap, we all know about. Madame Jojo’s was killed by gentrification [also known as “dynamic change” – Ed]. Kaff is closing its doors in Brixton. The list of venues disappearing around us keeps on growing.

But this is cabaret, live music, the avant-garde, the Avant-Gaga. Where ground is lost in one location, strength is gained in another. Cabaret is a constantly evolving monster and will not be tamed. Even if you don’t remotely care, cabaret will be there, in a shadowy doorway, a malodorous stairwell, in a constant state of metamorphosis and about to rob you.

Yes. About that. Sorry I’ve not been around much, but the budgets are just plain shit. It’s no one’s fault. My band is now a serious monster, and was never ‘just another Bugsy Malone Tribute Act’ [mille grazie Stuart MacBeth of The Original Rabbit Foot Spasm Band]. I expect to be paid professional rates in order that I can hire top musicians.

“Be ruthlessly organised, my friends. The world wants to kill you anyway.”

This isn’t an indie band. Well, it is, but we actually know more than three chords and can wipe our own arses, thank you. These jazz musician spivs make me pay for it, I tell you. And they hate me too. But that’s the price you shoulder for an independent band writing its own material instead of all that tired, twee vintage swing rep; now there’s a scene that’s hollowed out, and the band has booked it’s landing pass, stepping off well before the Vintage Vanity Showboat sails on to the rocks, trust me…

But we have been a success, despite the wet farts who tried to fleece us on the way up. As soon as I stopped giving a fuck, I started getting paid properly. And promptly. Be ruthlessly organised, my friends. The world wants to kill you anyway.

Well, why not? Pay attention. I’ve just said that. And we all give more than a passing toss about doing it in any way we please. I for one have to, as I (modestly) do not wish to completely overshadow everyone with my delusional greatness.  Most cabaristas think I am a cunt if they’ve heard of me at all.  And If they don’t, they will now. Does one need to elaborate? Yes? Very well, but on a slightly different matter: has the dynamic of this scene changed? Yes, change is a constant. But historically, it appears cyclical and is not unprecedented.

“You see, London does something. It’s an epic kind of place. Things happen you do not often see elsewhere.”

You see, London does something. It’s an epic kind of place. Things happen you do not often see elsewhere. But we are now observing the symptoms of a decadent phase really taking hold. The cost of accommodation rises unabated. Among the first people to get pushed out are often the people that made the place worth visiting: The artists. In matters of culture, it’s purely the people involved who make it a reality, something tangible.

What makes a scene? The producers, the movers and shakers, the club nights, the committed venues (we all love the Bethnal Green Working Men’s Club), the artists and most crucially, a fun loving audience sick of the formulaic TV prole-feed. If they’re not there, then a stale museum to our expressive highs and farcical social ineptitudes will not make it worth the door tax… Paris, anyone? Fucking dull and the food is just awful. Berlin, on the other hand: any time, my friends, any time.

The price of make up

Buggered if I know. Who do you think I am? Alex fucking Proud? Gonna tell you how to wear a cheap suit from Austin Reed, am I? Sorry, but it’s my turn, and none of us habitually read the Torygraph. Here’s an unrelated answer: excepting Manchester (where sod all has happened since George Best started drinking in earnest), the north of the UK is full of artistic powerhouses in Glasgow, Edinburgh, Liverpool, Leeds and Sheffield with their own sound and cultural strengths.

The Midlands? Why do you ask?

Going further south, you have Melbourne. Melbourne is like Brighton. But bigger. And in Australia, so the weather is better. Then there’s Bristol (with Cardiff as its satellite) and even that bastion of East Anglia that is Norwich. The London scene absorbs Cardiff before it doubles back to Bristol. Cardiff is one strange outlier.

“Cardiff is one strange outlier.”

I’m from the Principality (correct, not Monaco). Cardiff is where I started, with the tutelage of David Marcus, who himself still performs on the cabaret scene, once upon a time as one of Lily Savage’s dancing penises in Madame Jojo’s! As symmetry would have it, I subsequently performed with O’Grady in Café de Paris! Ask him. He’ll say I was shit if he remembers at all.

But in all seriousness, if you don’t start outside London as a cabaret artist these days, you may be forgiven for not knowing just how bleak the prospects are beyond those provincial capitals in Britain. London is still where it’s at. For now…

£4.99 for Boots brand waterproof mascara, by the way. OK?

Flog it on Kickstarter! 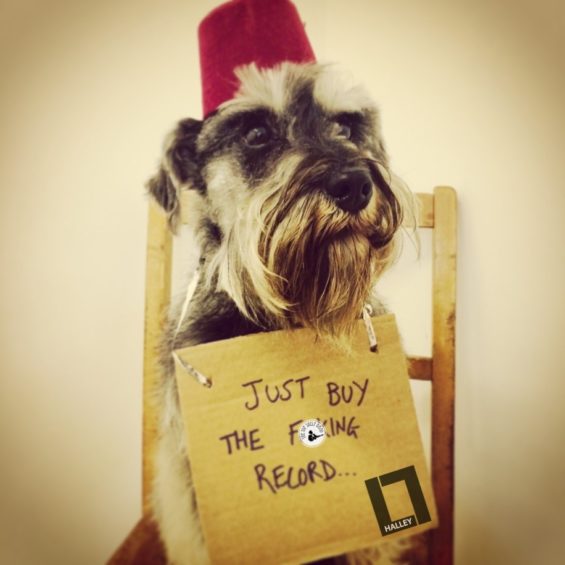 There’s nowt wrong with shouting “appreciate me now, and avoid the queue!” This has already benefitted a number of cabaristas and countless musicians. So we are also jumping on that bandwagon and humping it for all we can! And for good reason: it sidesteps many of the traditional methods that are dominated by the entertainment industry at large.

Social media helps spread the game further than just your own committed fanbase. Did you see Kung Fury? Holy-Fistyour-Sister! That won the Internet and then some! But I didn’t know I could contribute to its Kickstarter campaign until after it had closed. So sure, I got an axe to grind.

You ain’t so dull, dear reader. I won’t insult your intellect. However, if you would like to stick two fingers up to the entertainment industry, here is your chance to contribute to our humble cause.

Arthur Foxaque is the Founder, Director and Frontc*nt of The Top Shelf Band & Art Deco Records. His music & His band have featured in a recent Hollywood hit. His show was too rude for the Mayfair Arts Club (and was not asked to return, put it that way). You’ll be surprised where his band has been, who they have appeared with and who’s booking requests they’ve had to turn down. If he can’t sell you his album, he’ll probably steal your drink…