Will The Enduring Wonder Of Cirque Du Soleil Last Forever? 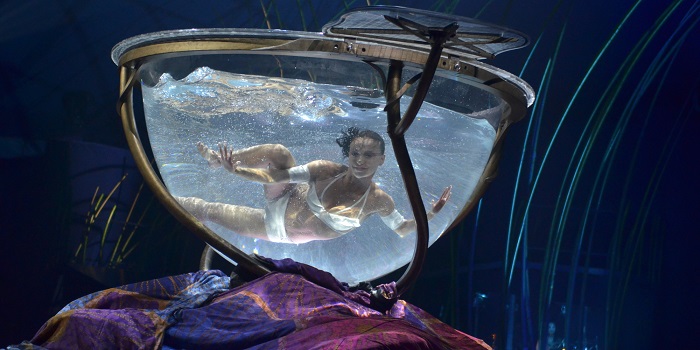 When you think there is nothing left for Cirque du Soleil to amaze us with, they come up with something newer, fresher, more death-defying and more artistic. They have been doing it for 33 years now so we shouldn’t be surprised at the depths and wonder of their collective imaginations, but some critics have watched their latest show and asked whether their creative pool has run dry?

Amaluna has returned to the Royal Albert Hall for a second run, until the end of February 2017. It first played to sell out crowds last year, and the two and a half hour spectacular, loosely based on Shakespeare’s The Tempest, is still packing them in. The show contains the usual range of circus disciplines, elaborate costumes and visual artistry, but some reviews have described a ‘tried and tested formula’ and the new show being ‘conceptually bland’ despite the addition of two new acts compared to the 2016 version.

Cirque du Soleil’s 33rd production is a unique gathering of artistes from around the world and the stunning mix of balance, dexterity, nerve, athleticism and contortion on display is certainly receiving few complaints from audiences. Packed houses are still dropping jaws at the drama, suspense and sheer theatre of the spectacle before them, and the sweeping majesty of the Royal Albert Hall is certainly a fitting backdrop to Cirque du Soleil’s dazzling show.

The Canadian entertainment company were formed in Montreal in 1980, and with the aid of Government grants managed to create their first show, Le Grand Tour du Cirque du Soleil in 1984. Its success secured a second year of funding and they have never looked back.

Today they are the largest theatrical producer in the world, employing over 5,000 people but staying true to a collective work ethic, whereby all the performers help with props and changing sets rather than using stagehands. Of the 33 individual shows that have stunned audiences all over the world, 18 of them are still active now and are either touring or taking up a residency somewhere. The company has toured every continent and plays to 9,000 people per night in a Las Vegas run it has maintained since 1993. They also have a residency at Disneyland in Florida and have performed at the Oscars ceremony twice, in 2002 and ten years later in 2012.

With other circus performers pushing the boundaries of contemporary circus all the time, it is true that Cirque du Soleil need to innovate to stay ahead of a game they have lead since forming in 1980. Can they find new ways to balance, swing, jump, throw and catch? Innovation has always been at the heart of Cirque du Soleil’s principles, along with comedy and a non-traditional approach to the circus and what people expect.  History suggests they can re-invent themselves again, take that ‘tried and tested formula’, spin it on its head and come back with something you couldn’t predict and couldn’t even describe, and we are more than willing to give them the opportunity.

Tickets for Cirque du Soleil can be booked today at BoxOffice.co.uk

This is a sponsored article. Want to see your website or brand here? Contact us here today.