Why EastEnd Cabaret Are Our Favourite Perverts 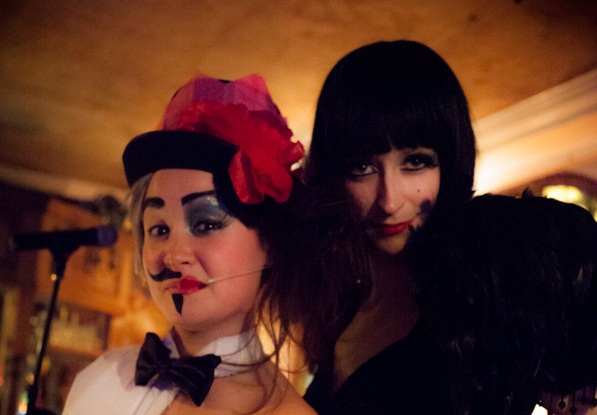 They say “two wrongs don’t make a right”. The two wrong’ns of EastEnd Cabaret beg to differ. It seems appropriate that I should review Perverts given my qualifications and experience as my alter ego Arthur Foxaque, the face, voice & vitriol of debauched jazz monkeys The Top Shelf Band. This, though, didn’t stop me getting ambushed.

The EastEnd Cabaret’s gin & sin twins, Bernadette Byrne & Victor Victoria (aka BB & VV) have extraordinary teeth. They only metaphorically bared but these two performers can bite! Perverts is a well-oiled show. Hearing their recent album, this live show gives it a great deal more context, not least for me a visual manifestation of the themes and central gags.

BB’s Parisian apparel seems to mock certain paintings by Manet or Degas. Half-man, half-woman, VV is like a cocaine-fuelled hand puppet driving the agenda behind the piano, as musical engine and manic foil; the domineering BB fronts coolly, reminiscent of a macabre Goldie Hawn, prowling amongst the audience, as charismatic rudder & “moral compass”. I say “moral” loosely, as VV is somewhat sociopathic by comparison!

Perverts is pure cabaret; a sexually miscreant muppet show with moments of untainted filth – the thinking perv’s wrongness! I would extract the urine about just how wrong, but they have a song about that already. At the outset, you don’t know which of them to love more. Or which side of the bi-gendered VV, even. But as the show resolves, you find yourself desperately revising your opinion on these two adorably frightening characters.

The audience tonight is mixed. Josh is from Wisconsin, working in education here and was drawn in by the Dangerwank video. Fun as this tune is, I don’t rate it as many of the others. It is not a bad song and I rather like it but it didn’t hit home in the live context and seemed to me to be an easy crowd pleaser without it having been thematically stitched into the plot and character relationships. In short, I thought it a cheap shot.

On the flip side, the crowning number Erection Tango is as clever as it is pornographic. It opens up BB’s considerable vocal capacity, hinting at much more without gratuitously proving it – a subtle and mature move balancing the obscene nature of the subject matter (necrophilia).  Suicide Pussy inverted the excuse to ‘inflict’ some musical saw on the audience, linking a thematic gag and pointing towards evidence of refined intellects at play here.

A seemingly cheap shot orgasm-face routine unpredictably concludes with a wickedly sabotaged tune and judicious use of the loop-peddle. Other themes emerge, not least the broader context of stories female-centred, -led and -driven stories which continues to stake its rightful place in entertainment.

The smut and filth is merely a (fucking satisfying, it has to be said) vehicle for the tasty song-writing and musicality. Perverts is a very Marx Brothers-like show in parts: the chaotic slapstick of the commandeered ‘man-beasts’ conveying BB to the stage is a classic vaudeville format. The waspish and often improvised verbal exchanges – many of them entertainingly back-biting comments from VV – display flashes of both Groucho and Harpo Marx rolled into one disturbingly funny stage character.

And you never see them out of character either. They are performers’ performers. A classic duo routine subverted just enough to shroud this model, veiled by their unnerving audience interaction. Everyone stands a high chance of being singled out and, well, mercilessly abused. I discovered this to my cost upon finding myself at the pointy end of the Potential Stalker song. And poor old Josh: BB obliged him to “walk her home” (i.e. all the way to the stage) under a barrage of verbal sniping from VV, whereupon BB shredded him anyway! No one is safe. But you pay your ticket, take your chances and hope it ain’t you. That’s the thrill.